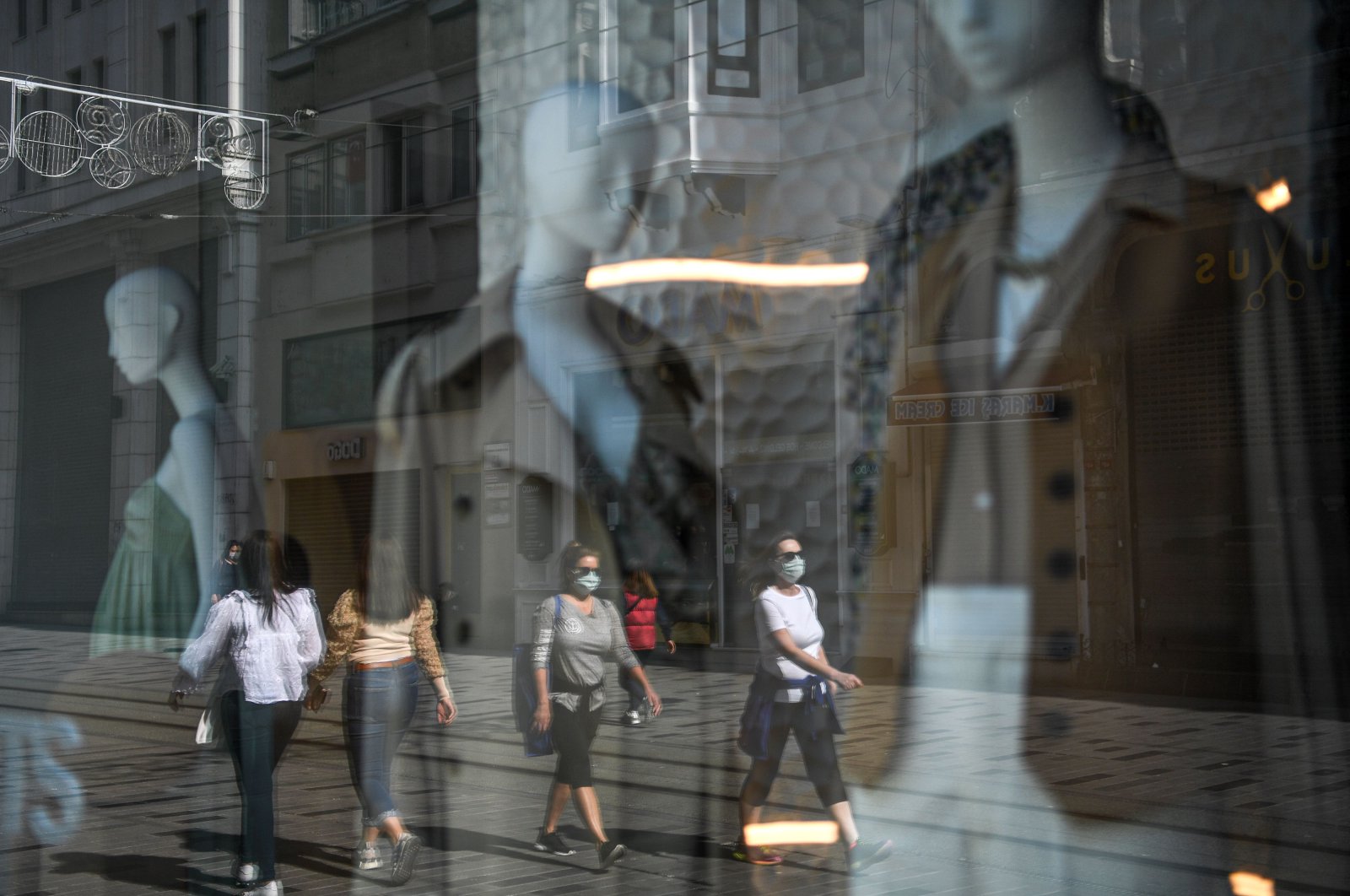 People wearing face masks due to coronavirus are reflected in a window shop of the Istiklal avenue before a weekend lockdown in Istanbul, Turkey, April 14, 2020. (AFP Photo)
by Daily Sabah with Agencies Apr 19, 2020 11:41 am

According to a statement released by the Banking Regulation and Supervision Agency (BDDK), banks are required to maintain a new consolidated and individual asset ratio of at least 100% starting at the beginning of next month; otherwise, they will have to pay an administration fee. The ratio will be calculated by banks and will be reviewed weekly by the BDDK, the statement said.

The sum of a bank’s loans, 75% of its securities portfolio and 50% of its central bank swap balances must exceed the sum of its Turkish lira deposits and 125% of foreign currency deposits, according to the new regulation. For participation banks, which follow Islamic banking regulations, the loans, securities and swaps should equal at least 80% of the deposits.

BDDK Chairman Mehmet Ali Akben said the move would address difficulties that he said the real sector faced when accessing credit as the economy is hit by the impact of shutdowns aimed at curbing the spread of the coronavirus.

“The primary duty of the banks is to transfer deposits collected from our citizens and companies to the real economy by giving credit,” Akben told state-owned Anadolu Agency (AA).

“However, we have seen that some banks prefer to direct their resources to money markets and foreign derivatives markets instead of performing this basic function.”

Akben said the regulator had told banks last month to make sure demands for loans were met and restrictions on credit eased. “In the past three weeks, we found that there were banks that did not comply with this recommendation,” he said.

The BDDK chairman noted that new regulations aim to enable the credit system to operate effectively, protect the interests of savers and support the development and stability of financial markets, adding that the watchdog could set new regulations and measures to respond to virus-induced banking problems.

He stated that banks that consider the financial wellbeing of their customers during the pandemic will increase their medium to long-term profitably by solidifying customer loyalty.

Government urges private banks to do more to mitigate impact

Last week, Treasury and Finance Minister Berat Albayrak called on private banks to do more to help customers hurt by the economic impact of the coronavirus, saying that state-owned banks had offered delays in repayments for loans.

“While our state banks are standing by our citizens with all the resources they have, we are utterly saddened by the attitude of the privately held banks,” Albayrak said.

“I, once again, invite private banks to be a part of our unity and solidarity during these times with their attitude,” he added.

The three banks said in separate statements that they will provide long-term postponements of up to 12 months for some sectors affected by the outbreak the most, such as tourism and public transportation. Firms will also be given an extra credit limit for easing their check payments and operation costs.

Participation banks have also moved to ease the process to minimize the potential damage to economic life.

The state-run participation bank, Ziraat Katılım, announced that upon the request of their commercial and retail customers, the installment, dividend and principal payments due on March 31 will be postponed.

One of the country's leading participation banks, Vakıf Katılım, will also provide flexibility in installment payments until June 30, upon the demands of customers using individual and corporate funds.

Meanwhile, funding specific to the hardest-hit sectors, including tourism and urban public transport, will be restructured for up to 12 months of a payment-free period.