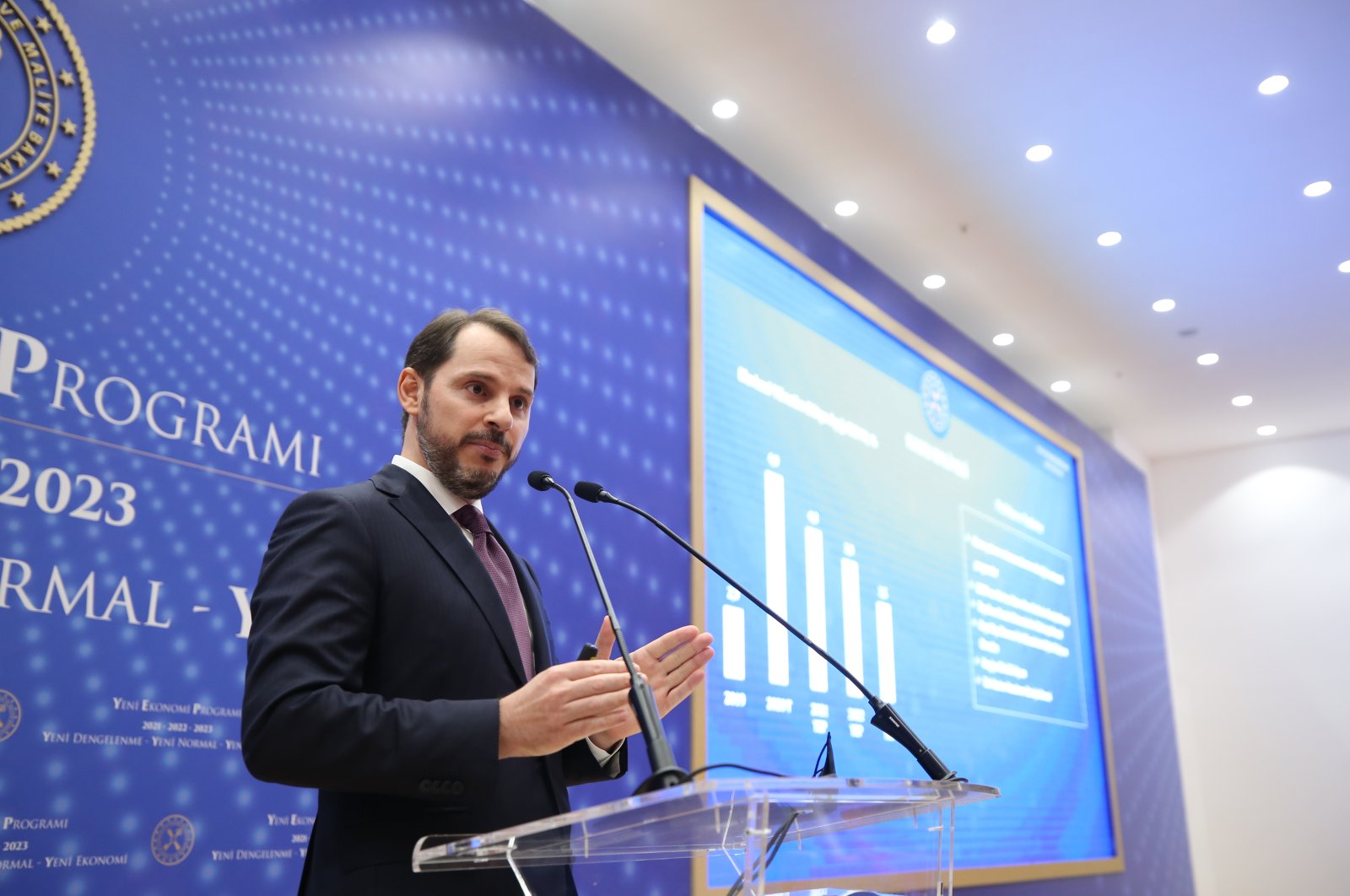 Turkey expects its economy to grow 0.3% this year and accelerate to 5.8% next year as it recovers from the pandemic, Finance Minister Albayrak said, stressing the country would continue with normalization steps and support financial stability

Speaking during the presentation of the government’s New Economic Program for the 2021-2023 period, Treasury and Finance Minister Berat Albayrak said normalization steps will continue in the coming weeks and will support financial stability.

Turkey expects its economy to grow by 0.3% this year as it recovers from the impact of the coronavirus pandemic, Albayrak said, but he warned of a 1.5% contraction in the worst-case scenario.

The minister said that gross domestic product (GDP) growth will slow in the fourth quarter compared with the third quarter but will accelerate to 5.8% in 2021. The program projects a 5% growth in 2022 and 2023.

"We determined the main themes of the New Economic Program as 'new balancing,' 'new normal' and 'new economy,'" Albayrak said.

"To reach our growth targets, we will focus on exports, value-added production and employment as we've always done," he added.

The Turkish economy despite the pandemic has managed to do better than its peers in the second quarter of the year and fared better than forecasts, aided by the government's stimulus campaign.

The coronavirus lockdowns brought activity in Turkey to a near standstill, just like other countries around the world. Ankara had shut schools and some businesses, closed borders and adopted weekend stay-home orders after it reported its first COVID-19 case on March 11. The economy was mostly reopened in June.

Economic indicators "point to a strong V-type recovery in the economy from the third quarter and a clear turn to positive growth figures," Albayrak said, adding Turkey was diverging positively from the economies of many developed and developing countries.

Referring to recent steps taken on interest rates, liquidity, swaps and asset ratios, Albayrak said: "Normalization steps will continue in the coming days and weeks. They will contribute to financial stability and our macroeconomic goals."

The Central Bank of the Republic of Turkey (CBRT) last week unexpectedly hiked interest rates by 200 basis points to 10.25%, tightening policy for the first time in two years to support the Turkish lira and rein in inflation.

The policy rate had been held at 8.25% since May – in the middle of Turkey’s coronavirus lockdown – following a nearly yearlong aggressive easing cycle that chopped it down from 24%.

Turkey’s inflation came in a bit lower than expected at 11.77% year-on-year in August, according to the official data.

The country’s central bank in July raised its year-end inflation forecast to 8.9% from 7.4%. It said the 1.5 percentage-point increase was driven by an upward revision in oil prices and food inflation projections.

Support packages to combat the coronavirus so far had amounted to TL 494 billion ($63 billion), or 10% of GDP, he said.

The unemployment rate is projected to reach 13.8% this year and 12.9% next year, according to the program.

Albayrak said the unemployment rate will gradually drop to 10.9% by 2023.

The government will implement policies for economic recovery during the post-pandemic period to support the labor market, he said.

Gold imports and losses in tourism income due to the coronavirus lockdown prevented a current account surplus in 2020, but Turkey aimed to improve its current account balance and provide sustainable growth, he said.

The country expects the budget deficit ratio-to-GDP to decline gradually throughout 2021-2023, the minister noted.

Among other goals, the new program aims to increase savings through strategic reforms in financial markets, he added.