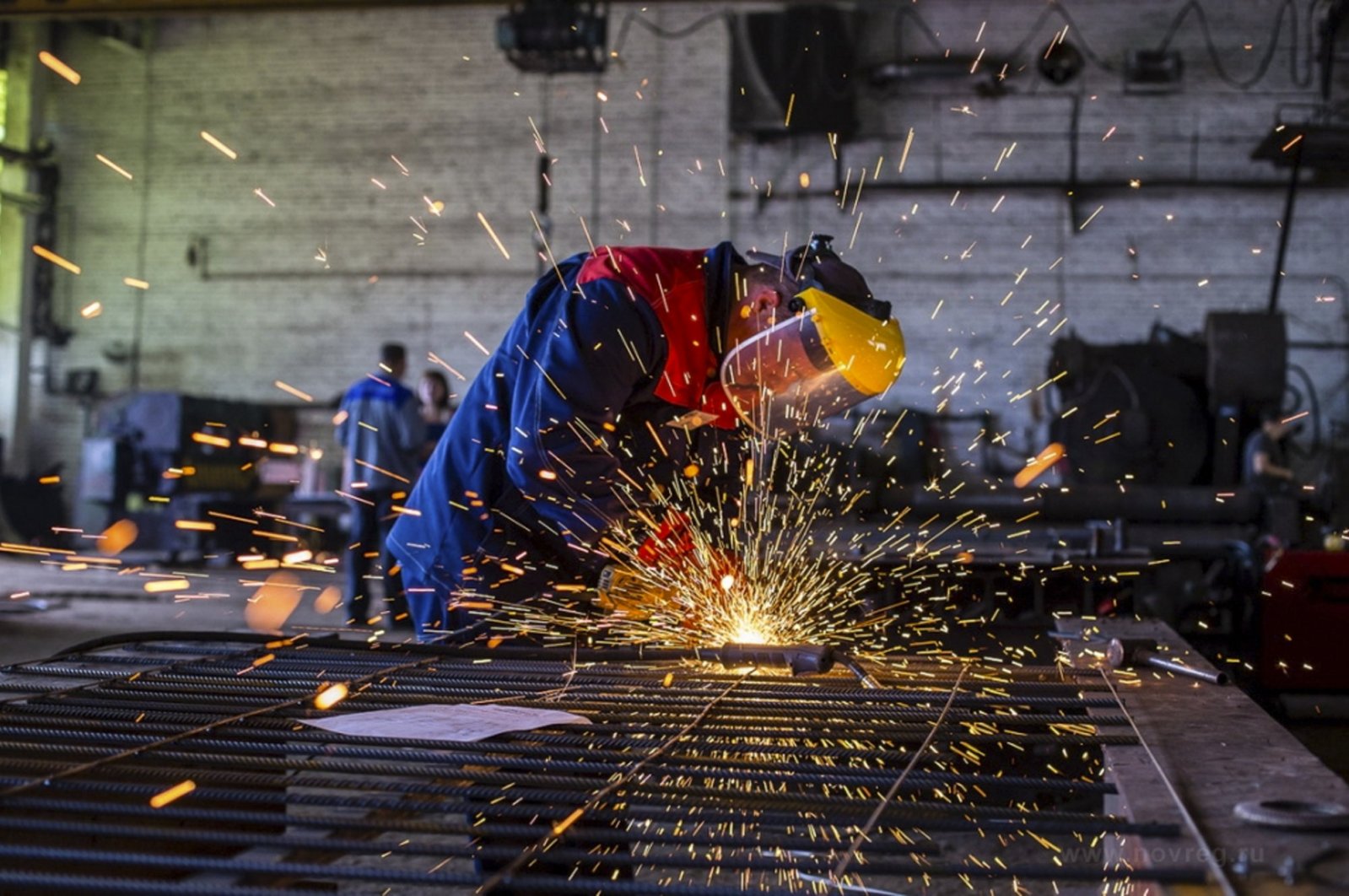 A worker is seen in a factory in this undated photo. (Sabah File Photo)
by DAILY SABAH WITH AA May 07, 2020 1:47 pm
RECOMMENDED

As Turkey eases coronavirus measures, the wheels of the manufacturing sector will turn again, and Turkish industrialists are hopeful about the future, according to industry representatives.

Varank's remarks came after President Recep Tayyip Erdoğan on Monday outlined Turkey's normalization process, saying the country will start easing measures gradually in May, June and July after the spread of the virus slowed over the past two weeks. Shopping malls, barbershops and some stores will be allowed to open on May 11 provided they abide by so-called normalization rules, Erdoğan said.

Tahsin Öztiryaki, the head of Istanbul Ferrous and Non-Ferrous Metals Exporters' Association (İDDMİB), said his sector has operated at 80% capacity during the period of the pandemic.

There is no harm in opening the factories by ensuring hygiene standards, which can be monitored by the Health Ministry, he stressed in a joint press release issued by industrial associations Wednesday.

"I guess, after May 15, the activities will resume across the world. It would help us if we act in parallel with the global activity," he added.

With the worldwide spread of the virus, several sectors – particularly aviation, tourism and manufacturing – have been affected by measures such as curfews and border restrictions.

Adnan Aslan, the head of the Steel Exporters' Association (ÇİB), stressed that as this virus deeply affects the world, the wheels of production will not start turning again in one day, but there is hope for industrialists.

"This decision (to reopen factories) will have a positive impact on our industrialists," he noted.

Turkey's export destinations should also recover for a normalization process of the country's exporters, added Aslan.

The country's exports and imports have both been negatively affected by the coronavirus, with a marked decline observed over the course of April.

Exports dropped by 41.38% year-on-year to $9 billion over the month, according to Trade Ministry data released Monday.

The country's foreign trade volume diminished by 34.31% year-on-year to $21.9 billion in April, the data showed.

Çetin Tecdelioğlu, the chairman of the Hardware Industrialists' and Businessmen's Association (HISİAD), highlighted that the hardware factories continued production at 30%-50% capacity during the outbreak.

"As the hardware sector, we have always expressed that production should not stop; it should continue at least part-time," he added.

Burak Önder, the head of Home and Kitchen Appliances Industrialists' and Exporters' Association (EVSİD), said there is a gradual normalizing process in different locations in the world, including Italy, Spain, Germany, Norway, Austria and the U.S.

"Our factories will start their activities as of May 11. This process gives our people and our business world confidence and hope," he added.

The home and kitchen appliances sector closed last year with an export volume of $3 billion.

Rüstem Çetinkaya, a member of the Sectors Council of the Turkish Exporters' Assembly (TİM), said the 40% drop in industrial exports in April is an indication of a contraction in manufacturing.

"Assuming a possible fall in tourism revenues until the end of 2020, exports and industry will gain more significance," Çetinkaya noted.

He added that industrialists will continue to be the driving force of Turkey's exports.

Gökhan Turhan, the chairman of the Armature, Valve, Faucet, Installation Equipment and Valve Industrialists Association, said the way to fight the pandemic is not to run from it but to learn how to fight.

He noted: "We should return to life by taking all measures, including social distancing. Our exports and production should continue, and we must show that Turkey can become the main supply center."