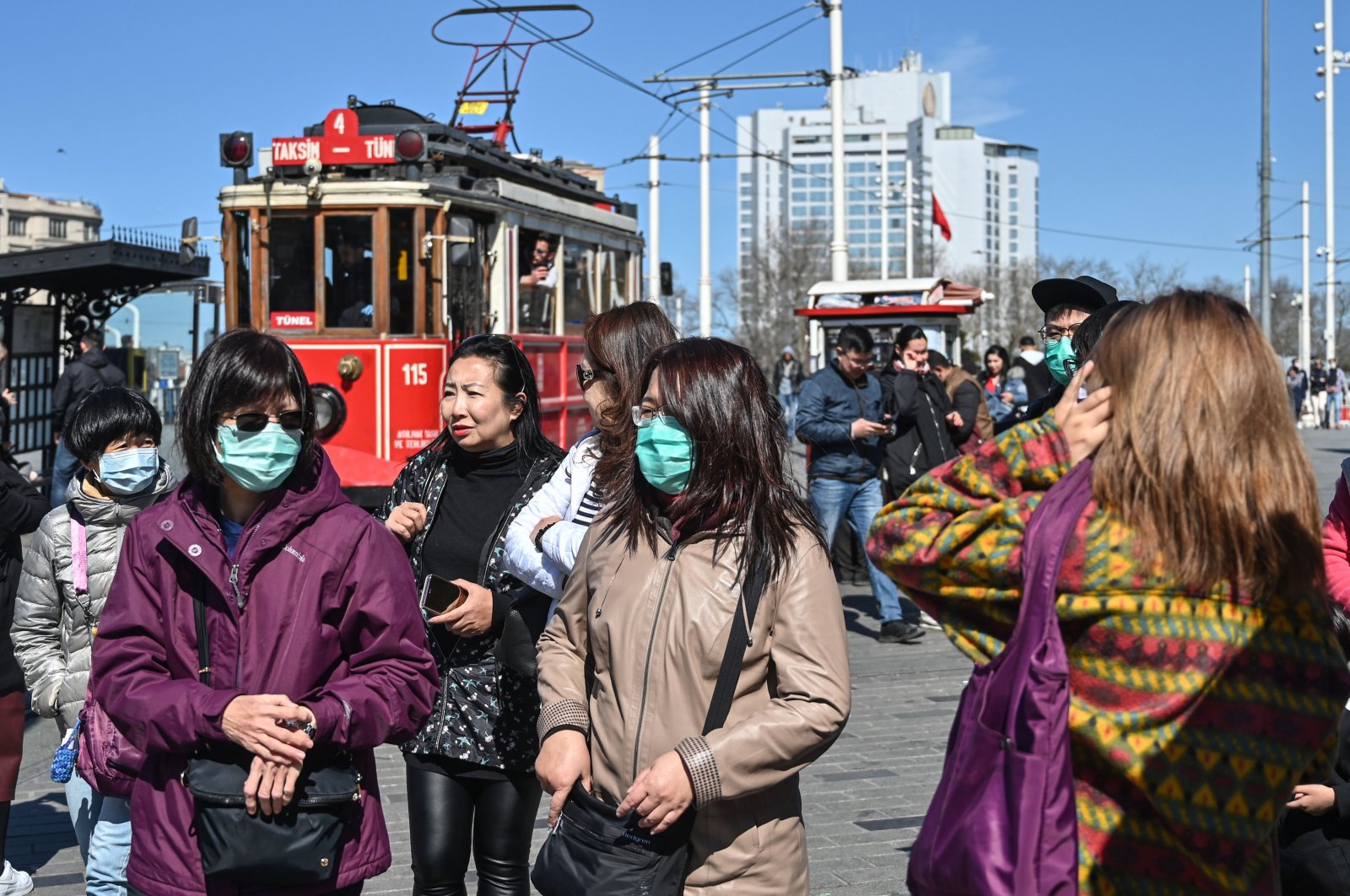 Tourists wear protective face masks as they walk at Taksim Square as the nation tries to limit the spread of the new coronavirus, in Istanbul, Tuesday, March 17, 2020. (AFP Photo)
by Daily Sabah with Agencies Mar 23, 2020 2:09 pm
Edited By Adil Girey Ablyatifov

To tackle effects of the pandemic, Turkish lenders have offered some flexible loan payment options for customers and corporate debt restructuring, especially for badly hit tourism and transportation sectors

Public and private lenders in Turkey announced Monday the launch of support packages for their customers as they moved to soften the economic impact of the coronavirus outbreak.

In a statement, Turkey’s Ziraat Bank said it will allow all individual and corporate clients to postpone interest and principal payments due on March 31.

The state bank said it will allow restructuring of loans with up to 12 months of additional time for sectors such as hard-hit tourism, as well as up to a six-month nonpayment period.

Ziraat Bank also said it will increase the limits of clients who pay wages through the bank by the amount equal to three months of employee wages, as long as the companies do not decrease their employment from end-of-February levels.

Commenting on the banks’ move, Treasury and Finance Minister Berat Albayrak said in a statement he shared on his Twitter account that the move from the public banks is important as part of the measures taken by the country to reduce the effects of the coronavirus pandemic on the economy. It prevents the citizens from getting unemployed while keeping the labor market alive, he said.

He also called for private banks to take similar steps, adding that “as a state, nation and the business world, we will come over this bad situation hand in hand.”

VakıfBank, also announcing its support package, said it will give clients flexibility in repaying loans until June 30, according to a statement published by the lender.

The bank also said it will allow restructuring of loans extended to companies, especially the ones operating in tourism and transportation sectors hard-hit by the coronavirus outbreak.

In order to facilitate the public payment obligations of companies such as social security taxes, cash management limits will be increased, and payments made from these limits will be provided with a three-month nonpayment period and up to 12-month for installments.

VakıfBank Mobile and VakıfBank branches will continue to operate in accordance with the measures announced by the Ministry of Health between 9 a.m. to 5 p.m. for transactions that cannot be done through internet banking and ATMs, the statement said.

The state-owned Halkbank said it will allow all individual and corporate clients to postpone interest and principal payments due on March 31.

The bank said it will allow restructuring of loans with up to a six-month nonpayment period, which may be extended to 12 months for sectors such as tourism.

It also said it will increase the limits of clients who pay wages through the bank equal to employee wages in the next three months, as long as the companies do not decrease their employment from end-of-February levels.

President Recep Tayyip Erdoğan announced earlier last week that Turkey would postpone debt payments and reduce the tax burden on some sectors in a package of measures to support the economy.

Among specific measures, he said Turkey's tourism accommodation tax was suspended until November to support the key tourism sector, which accounts for 12% of the economy.

Value-added tax for domestic aviation was cut to 1% from 18% and the limit of the treasury-backed credit guarantee fund – which guarantees loans to small- and medium-sized firms – would be doubled to TL 50 billion ($7.56 billion).

In a statement made Monday, the bank said, in accordance with customers' needs until April 30, postponement of principal, interest and installment payments will be allowed until June 30 without any additional condition.

All the necessary support will be provided on a case-by-case basis, regardless of the sector, especially for those more affected, like the tourism, logistics, shopping malls and retail sectors, the statement said.

Small and medium-sized enterprises (SMEs) and micro-enterprises will also be supported with the existing limits in order to allow them to be able to fulfill the commercial obligations that they undertook before the pandemic and if necessary, maximum efforts will be made to support those enterprises, the bank added in the statement.

According to the package, when necessary, an additional limit will be allocated to the clients for salary payments while no bank customers will be charged for Electronic Funds Transfer (EFT) and wire transfer transactions through digital channels, including card to card transfers, until April 30.

Credit card limits will also be increased according to the customers’ needs, especially for expenses on health and food.

Point of Sale (POS) and Payment Recording Device fees will be delayed for three months, it added.

Another private lender Akbank said it will allow all individual and corporate clients to postpone interest, principal and installment payments, due on April 30, until June 30.

Participation banks have also moved to ease the process to minimize the potential damage to economic life.

The state-run participation bank, Ziraat Katılım, announced that upon the request of their commercial and retail customers, the installment, dividend and principal payments due on March 31 will be postponed.

The bank said that appropriate term restructuring applications will be developed for the current financing of the customers whose cash flow was disrupted or could face disruption and may have payment problems accordingly, by providing an additional period of up to six months of a payment free period and up to 12 months for sectors with periodic activity.

Firms that pay their personnel salaries though the Ziraat Katılım will be provided with an additional limit of three months' staff salary expense, if necessary, on the condition of maintaining their employment levels the same as the end of February, the bank said in a statement.

One of the country's leading participation banks, Vakıf Katılım, will also provide flexibility in installment payments until June 30, upon the demands of customers using individual and corporate funds.

Besides, funding specific to the most affected sectors, including tourism and urban public transport, will be restructured for up to 12 months of a payment free period.

The Turkish Capital Markets Board also said Monday that it was extending the first-quarter financial reporting deadline by 30 days for companies with traded market tools in response to the coronavirus pandemic.

Turkey on Sunday confirmed nine more deaths from COVID-19, the disease caused by the new coronavirus, as the total number of confirmed cases in the country rose to 1,256.

Health Minister Fahrettin Koca said Sunday evening that all of the 30 people who have died from the disease were senior citizens.