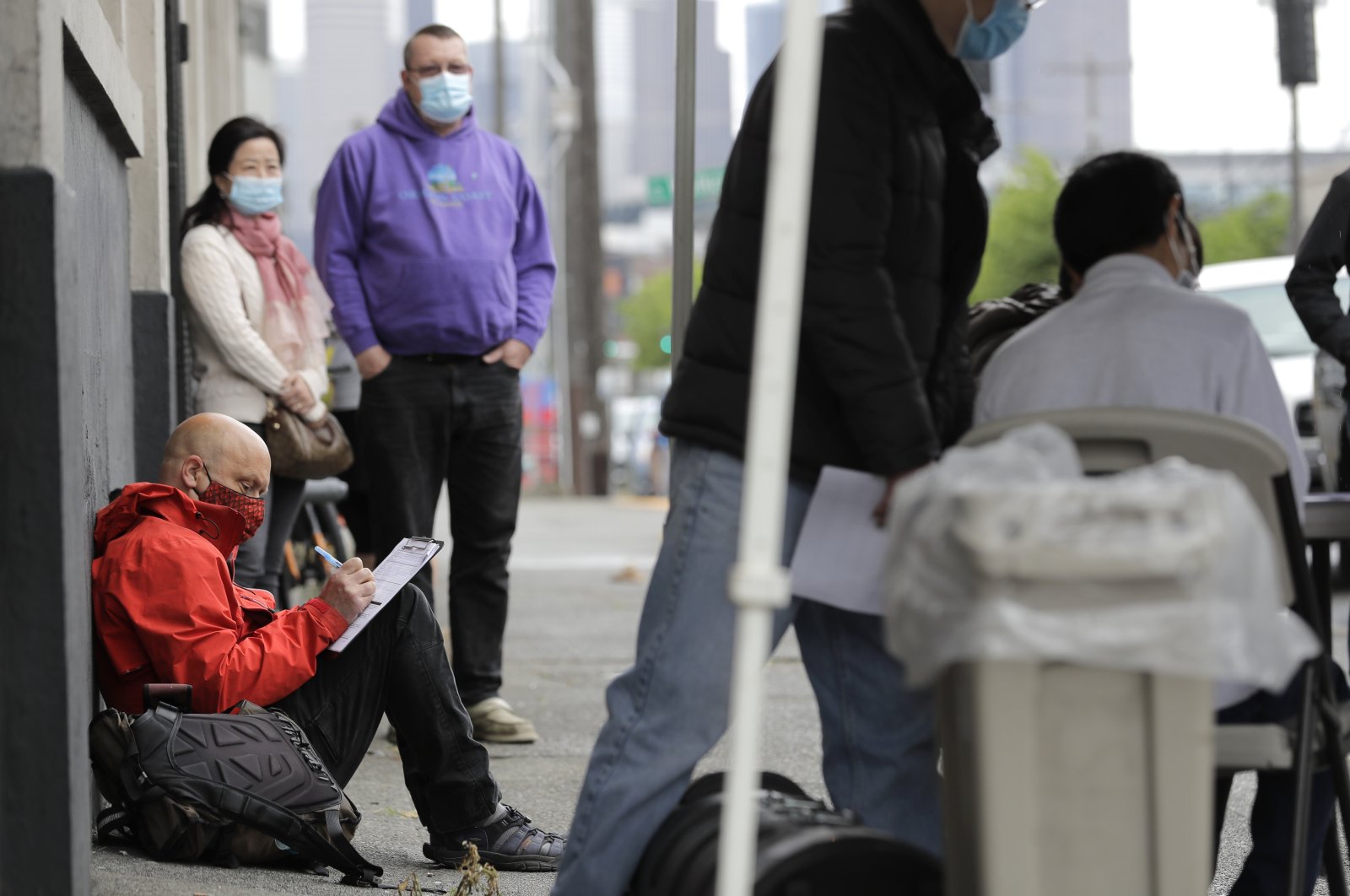 A man (L) fills out a job application during a walk- and drive-up job fair in Seattle for clothing maker Outdoor Research's new line of face masks and other personal protection equipment, Washington state, U.S., May 16, 2020. (AP Photo)
by ASSOCIATED PRESS
Jul 02, 2020 3:34 pm

U.S. employers added a substantial 4.8 million jobs in June, and the unemployment rate fell to 11.1%, as the job market improved for a second straight month yet still remained far short of regaining the colossal losses it suffered this spring.

The nation has now recovered roughly one-third of the 22 million jobs it lost to the pandemic recession. And with confirmed coronavirus cases spiking across the Sun Belt states, a range of evidence suggests that a job market recovery may be stalling. In those states and elsewhere, some restaurants, bars and other retailers that had reopened are being forced to close again.

The re-closings are keeping layoffs elevated: The number of Americans who sought unemployment benefits barely fell last week to 1.47 million. Though that weekly figure has declined steadily since peaking in late March, it's still more than double the pre-pandemic peak set in 1982. And the total number of people receiving jobless aid remains at a sizable 19 million.

California has re-closed bars, theaters and indoor restaurant dining across most of the state. Florida has also re-closed bars and beaches. Texas has reversed some of its efforts to reopen its economy. New York has paused its plans to allow indoor dining.

Credit and debit card data tracked by JPMorgan Chase show that consumers reduced their spending last week after having increased it steadily in late April and May. The reversal has occurred both in states that have reported surges in COVID-19 and in less affected states, said Jesse Edgerton, an economist at J.P. Morgan.

Nationwide, card spending fell nearly 13% last week compared with a year ago. That is worse than the previous week, when year-over-year card spending had fallen just under 10%.

And Kronos, which produces time management software, has found that in the past two weeks, growth in the number of shifts worked has slowed in the Southeast and is now rising at just half the rate of the Northeast.

"The pace of recovery is starting to slow,” said Dave Gilbertson, an executive at Kronos. "We are expecting to see more of a plateauing over the next couple of months.”

Thursday’s jobs report is based on data gathered in the second week of June, which helps explain why the figures reflect an improving trend. Last week’s plateau in work shifts will instead affect the July jobs figures, to be released in early August.

McDonald’s has paused its reopening efforts nationwide, and Apple says it will re-close 30 more of its U.S. stores, on top of 47 that it had already shut down for a second time.

Economists have long warned that the economic benefits of allowing businesses to reopen would prove short-lived if the virus wasn’t brought under control. Until most Americans feel confident enough to dine out, travel, shop or congregate in groups without fear of infection, restaurants, hotels and retailers will lack enough customer demand to justify rehiring all their previous workers.

Still, some bright spots in the economy have emerged in recent weeks. Manufacturers expanded in June after three months of shrinking, the Institute for Supply Management, a trade group, said Wednesday. New orders are flowing in, and factories are adding more jobs, the ISM said.

Record-low mortgage rates are also encouraging more home buyers. Purchases of new homes rose sharply in May, and a measure of signed contracts to buy existing homes soared by a record amount, a sign that sales should rebound after falling for three straight months.