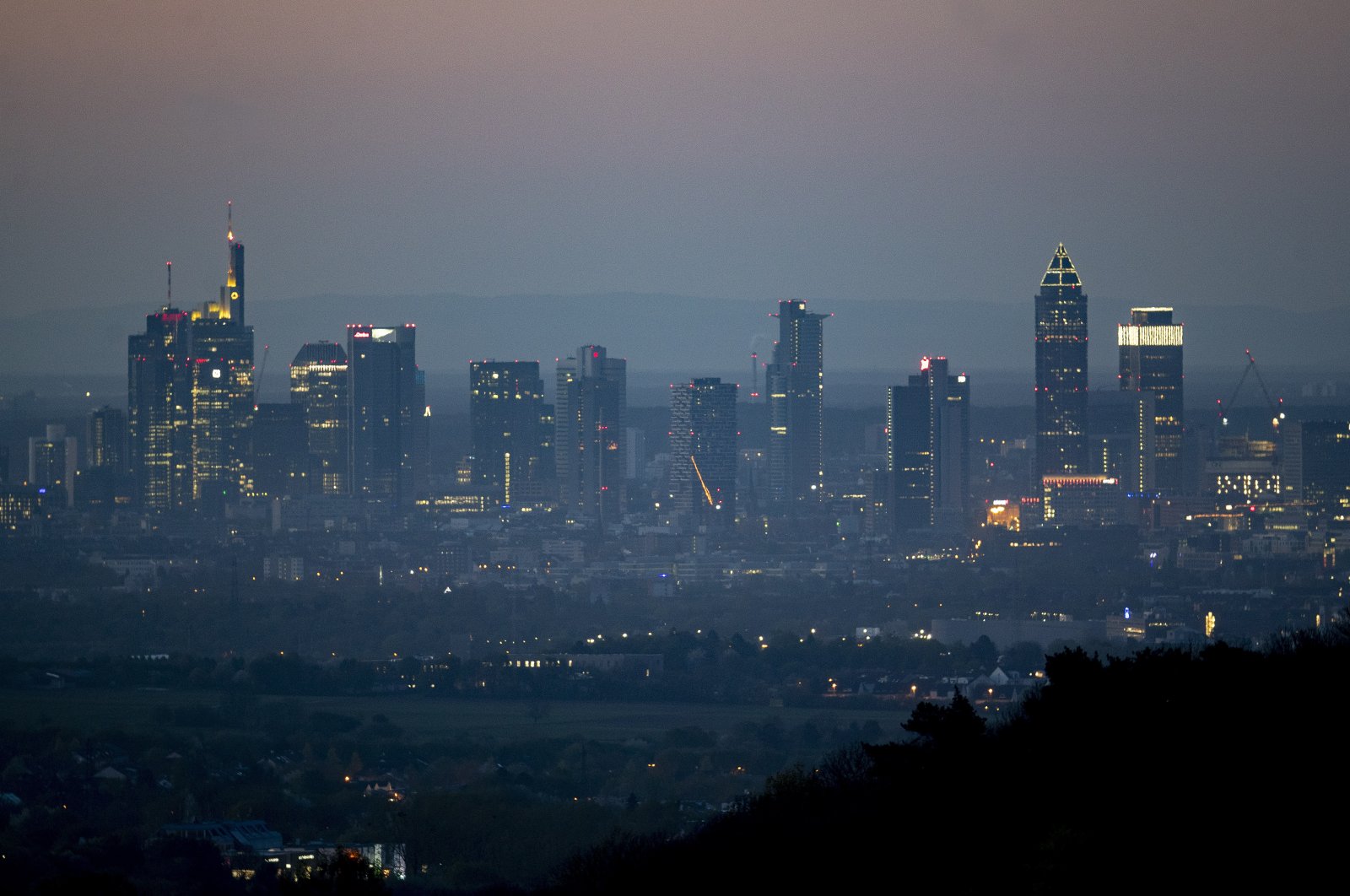 The buildings of the banking district in Frankfurt against an early morning skyline, Germany, April 14, 2020. (AP Photo)
by Daily Sabah with AFP Apr 15, 2020 1:55 pm
RECOMMENDED

Germany plunged into a recession in March set to last until the middle of the year, the economy ministry said Wednesday, as the government held key talks on whether to end crippling curbs imposed to fight the coronavirus pandemic.

With schools and most shops closed, travel halted and millions now working from home, Europe's biggest economy has been severely hit by the COVID-19 crisis.

As calls grow from industries for restrictions on public life to be gradually eased, Chancellor Angela Merkel will hold talks this afternoon with state premiers on whether to extend the curbs, which are currently due to run until April 19.

"Falling global demand, interruption of supply chains, changes in consumers' behavior and uncertainty among investors" had all made themselves felt in the export giant, the economy ministry said.

The economic blow from the virus fell just as Germany was beginning to recover from a 2019 marked by the impact of trade wars and Brexit fears.

Industry, in particular, had seen rises in new orders and activity as 2020 got underway, the ministry noted.

But "given the massive demand and supply shock at home and abroad from the coronavirus pandemic, economic developments reversed course" for manufacturers, it said.

Meetings like Wednesday's between Merkel's cabinet and state governments aim at bringing measures into line across Germany's 16 states, with some regional capitals backing toughness and others keen to gradually reopen society.

Annoyed with the social distancing rules, some Germans have pointed to neighboring Austria, where Chancellor Sebastian Kurz allowed many smaller businesses to reopen starting Tuesday, but with conditions such as wearing masks and maintaining a safe distance from others.

"Even if the first protective measures can be loosened somewhat (after April), growth will remain very muted and only revive bit by bit," the economy ministry forecast.

To cushion some of the blow, Berlin has passed a rescue package totaling 1.1 trillion euros ($1.2 trillion), ranging from guarantees for bank lending to businesses to a state fund that could buy up stakes in stricken companies if necessary.

The federal government also eased access to a scheme that tops off workers' wages if their employer slashes hours.

The Federal Employment Agency (BA) said some 725,000 companies had applied for assistance, adding that the number of workers affected will likely be "significantly" above the 1.4 million helped in the 2008-2009 financial crisis.

Berlin estimates that around 2.1 million workers will have to fall back on the support.

Meanwhile, all eyes are on a European Union heads of government videoconference on April 23 to lay the groundwork for recovery across the bloc.

Finance ministers from the eurozone single currency area agreed on 500 billion euros of immediate support last week, but economists and politicians warn more will be needed, especially for the hardest-hit southern nations like Spain and Italy.

The International Monetary Fund (IMF) on Tuesday said the world economy in 2020 will suffer its worst year since the Great Depression of the 1930s. In its latest forecast, the fund expects the global economy to shrink 3% this year – far worse than its 0.1% dip in the great recession year of 2009 – before rebounding in 2021 with 5.8% growth but stressed its forecasts were marked by "extreme uncertainty" and that outcomes could be far worse, depending on the course of the pandemic.

Predicting a contraction of up to 5.4% for Germany this year, some among Berlin's Council of Economic Advisers (SVR) warned in March of consequences if a European recovery program falls short.

"It's not much good if one country, hopefully, Germany, comes through the crisis relatively well but around us, the crisis is not yet over, then we won't be able to ramp up production," SVR member Achim Trueger said at the time.