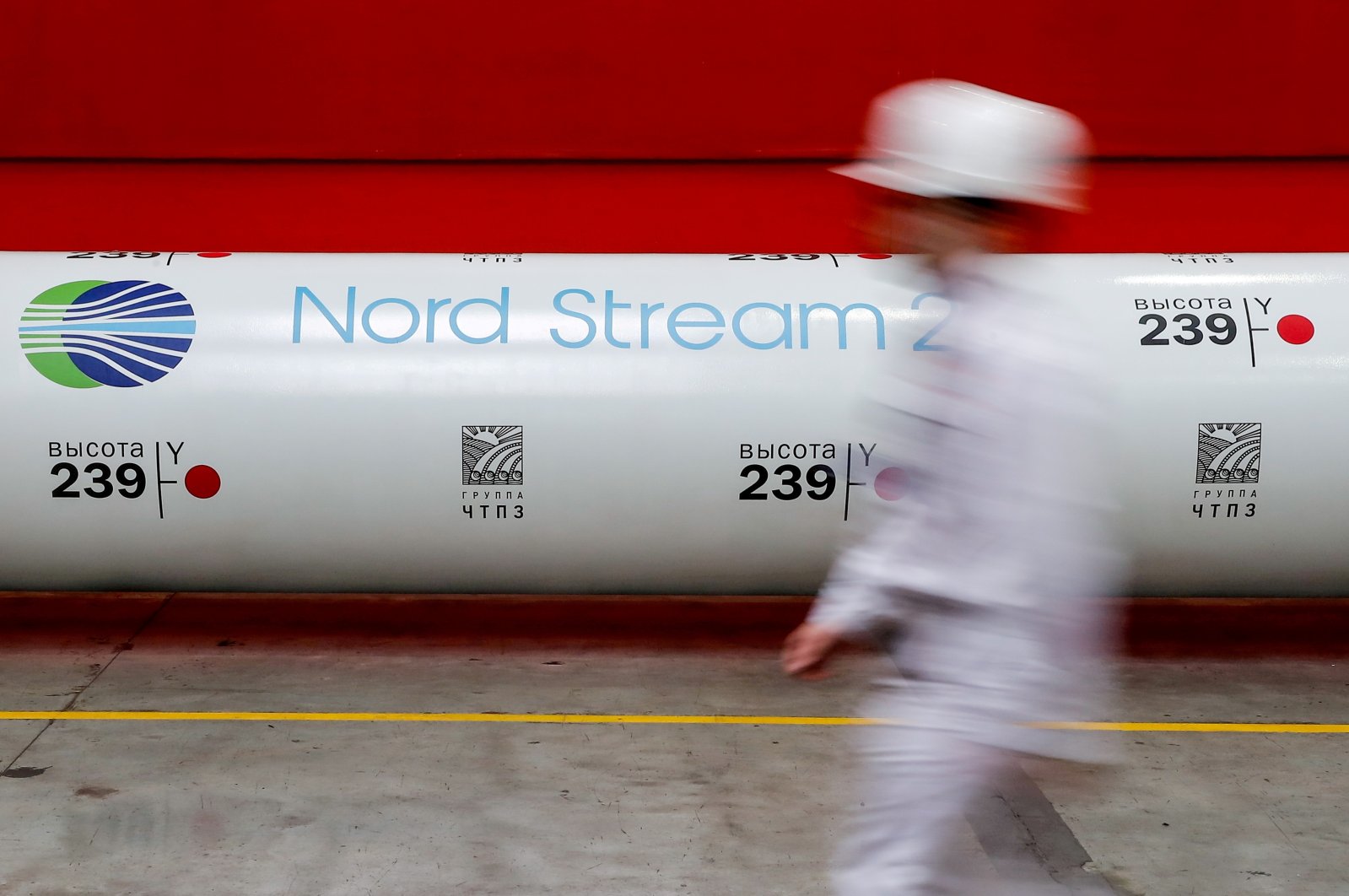 The logo of the Nord Stream 2 gas pipeline project is seen on a pipe at the Chelyabinsk pipe rolling plant in Chelyabinsk, Russia, Feb. 26, 2020. (Reuters Photo)
by Agencies Sep 10, 2021 10:39 am
RECOMMENDED

The controversial Nord Stream 2 project, which is expected to double natural gas supplies from Russia to Germany by bypassing Ukraine, had been completed, Russian energy giant Gazprom announced Friday.

"Chairman of the Management Committee Alexei Miller said that this morning at 8.45 Moscow time (GMT+3) construction of the Nord Stream 2 gas pipeline was fully completed," Gazprom said in a statement.

Nord Stream 2 has divided European capitals and raised tensions between the European Union and the United States.

A key controversy is that it diverts supplies from an existing route through Ukraine and is expected to deprive Europe's ally of annual transit from Russia.

The Nord Stream 2 project has posed a major foreign policy dilemma for the Biden administration. U.S. officials from both parties have long feared that it would give Russia too much power over European gas supplies, potentially also shutting off gas to Russian adversaries Ukraine and Poland. But the U.S. has been determined to rebuild ties with Germany that were damaged during the Trump administration.

Poland, Ukraine and other eastern and central European countries bypassed by the pipeline are concerned that Russia will use gas supplies as a political weapon. Lawmakers from both sides of the aisle in U.S. Congress and some members of the administration are sympathetic to that position

Under the terms of the expected U.S.-Germany agreement, Ukraine would get $50 million in green energy technology credits, a guarantee of repayment for gas transit fees it will lose by being bypassed by the pipeline through 2024, and a pledge from both Germany and the U.S. that sanctions will be revisited should Russia use the gas as a political weapon, according to the congressional aides.

In a nod to Poland, Germany will also agree to sign onto the so-called “Three Seas Initiative,” an EU and U.S.-promoted scheme that aims to boost investment, infrastructure development and energy security among the countries bordering the Baltic, Black and Adriatic seas, according to the aides.

Running from Russia's Baltic coast to northeastern Germany, the underwater, 1,200-kilometer (745-mile) pipeline follows the same route as Nord Stream 1, which was completed over a decade ago. The Nord Stream 2 is expected to deliver 55 billion cubic meters of gas per year.