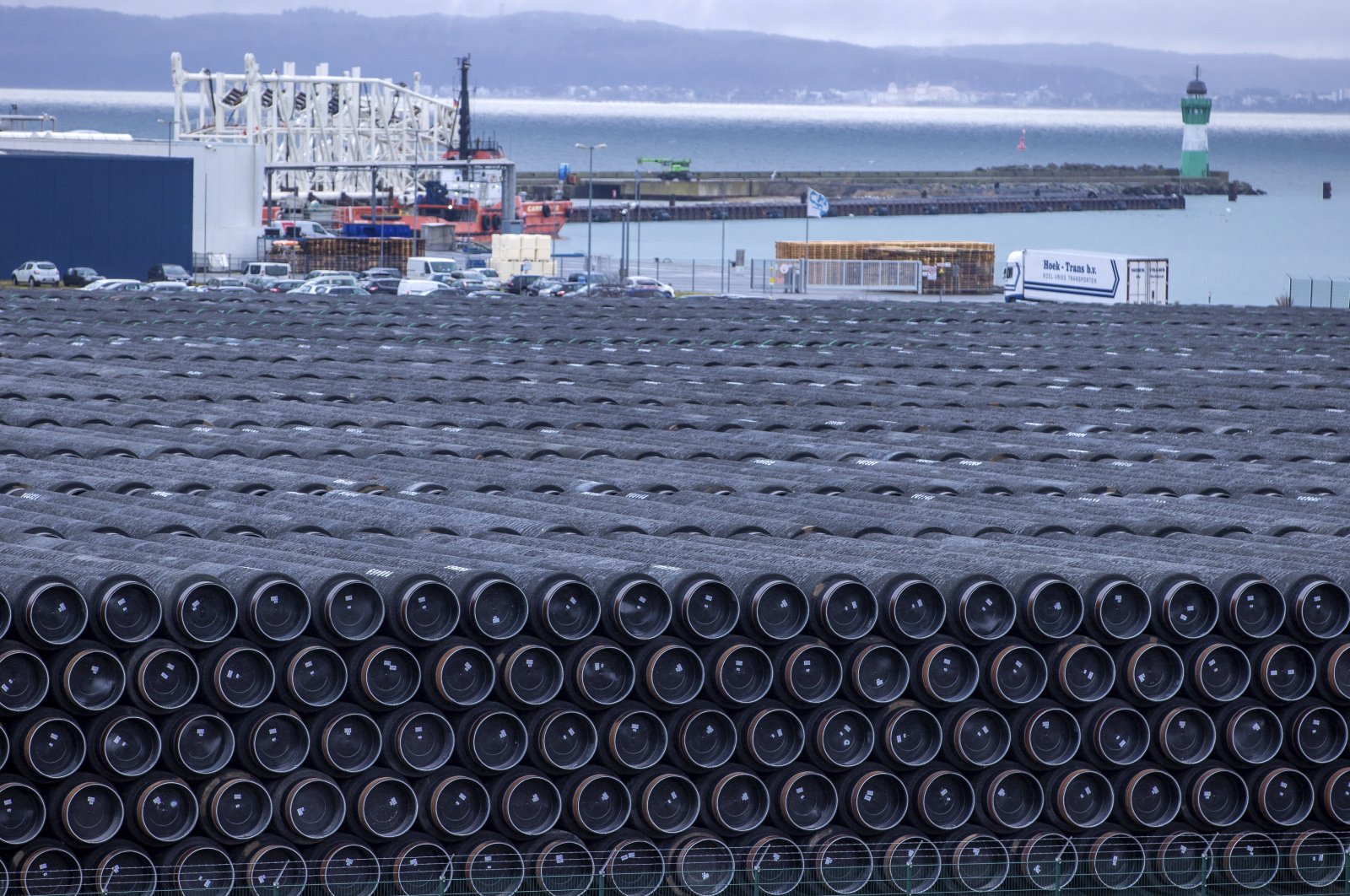 Pipes for the construction of the Nord Stream 2 natural gas pipeline from Russia to Germany and the Baltic Pipe from Denmark to Poland are stored at the port of Mukran in Sassnitz on the island of Ruegen, Germany, Jan. 6, 2021. (Photo via AP)
by ASSOCIATED PRESS Dec 22, 2021 11:38 am
RECOMMENDED

The pipeline is built and being filled with natural gas. But Russia’s Nord Stream 2 faces a rocky road before any gas flows to Germany. Its new leaders adopt a more skeptical tone toward the project and tensions ratcheting up over Russia’s troop buildup at the Ukrainian border.

The pipeline opposed by Ukraine, Poland and the United States awaits final approval from Germany and the European Union to bypass other countries and start bringing natural gas directly to Europe. The continent is struggling with a shortage that has sent prices surging, fueling inflation and raising fears about what would come next if gas supplies become critically low.

The U.S. has stressed targeting Nord Stream 2 as a way to counter any new Russian military move against Ukraine, and the project already faces legal and bureaucratic hurdles. As European and the U.S. leaders confer on how to deal with Russia's pressure on Ukraine, persistent political objections — particularly from EU members like Poland — add another challenge to one of Russian President Vladimir Putin's key projects.

Former longtime German Chancellor Angela Merkel backed the pipeline, and the country's new leader, Olaf Scholz, did so while serving as her finance minister. But his new government has taken a noticeably more distanced tone after the Greens party became part of the governing coalition. The Greens' campaign position was that the fossil fuel pipeline doesn't help fight global warming and undermines the strategic EU interests.

“Nord Stream 2 was a geopolitical mistake,” Habeck said in an interview published Sunday in the newspaper Frankfurter Allgemeine Sonntagszeitung. “The question is open if it will be able to start operating,” adding that further “aggression” meant “nothing is off the table.”

As chancellor, Scholz has been cautious in his comments, and it’s not clear if he’s willing to go as far as U.S. Secretary of State Antony Blinken, who has said it is “very unlikely” that gas will flow if Russia “renewed its aggression" toward Ukraine.

Deputy German government spokesperson Wolfgang Buechner, pressed on whether an invasion would halt the pipeline, said Nord Stream 2 is “an undertaking of a private business that is largely completed” and that regulatory approval “had no political dimension” but stressed that military aggression would have “high costs and sanction.”

Scholz "never makes things completely clear,” said Stefan Meister, an expert on Russian energy policy at the German Council on Foreign Relations. “So I am not sure under which conditions he would really agree to stop the pipeline."

Still, Meister said, there was “a new tone, a new rhetoric from the new German government.”

The pipeline would double the volume of gas pumped by Russian-controlled gas giant Gazprom directly to Germany, adding to a similar pipeline under the Baltic Sea and circumventing existing links through Poland and Ukraine. Gazprom argues it would allow more reliable long-term supply and help save billions in transit fees paid to Poland and Ukraine. Gazprom stresses that the pipeline is part of its role as a long-term supplier of affordable energy to Europe, which is heavily dependent on natural gas imports.

Pipeline critics say it increases Russia’s leverage over Europe, pits member states against each other and deprives Ukraine of key financial support. Europe also went into winter with scant gas reserves that have sent prices soaring to eight times what they were at the start of the year, with Putin using the crunch to underline his push for final approval of the project.

For now, the approval process for the pipeline is on hold. German regulators say they can only rule on an entity formed under German law, so Swiss-based Nord Stream 2 is forming a German subsidiary to comply; a decision won't come in the first half of this year. Then the European Commission must also review the project before it goes back to German regulators for a final look. Analysts say the decision is a legal and bureaucratic one that isn't subject to politics.

Critics of Nord Stream 2 argue it does not meet an EU requirement to effectively separate the gas supplier from the pipeline operator to prevent a monopoly that could hurt competition and mean higher prices for consumers. Nord Stream 2 is owned by a Gazprom subsidiary.

Asked about the separation issue, Nord Stream said that it “undertakes all necessary efforts to ensure compliance with applicable rules and regulations" and has been granted permits by the four EU countries through whose territory it passes.

Regarding Habeck's critical remarks, the company said that “we do not comment on political statement.”

Even if the pipeline passes regulatory review, it's not necessarily in the clear due to Poland’s opposition. That's because EU members can sue in the European Court of Justice if they disagree with regulators' decision, said Alan Riley, a senior fellow at the Atlantic Council and a lawyer specializing in European antitrust and energy issues. The anti-monopoly rules could bring years of litigation, and possibly a preliminary order halting pipeline operations until the case is decided.

“This could go on for some time,” Riley said. Final approval “is not a slam-dunk by any means.”

Konstantin Kosachev, a deputy speaker of the upper house of Russian parliament, deplored the “artificial” obstacles against quickly launching Nord Stream 2. While some argue that Europe has grown more dependent on Russian gas, the country has met all its obligations, he said.

“The opponents of gas projects by Russia and the EU nations fear not that Russian supplies would fail, but just the opposite, that all problems would be solved, leaving no opportunity to accuse Moscow of harboring ill intentions or using energy as a weapon,” Kosachev said.

While noting that German Foreign Minister Baerbock’s anti-Nord Stream 2 comments reflect her and her party’s views, Kosachev emphasized that she represents the entire country now.

“Explaining the failure to provide cheap fuel exclusively by tales about what Russia could allegedly do wouldn’t be the best start for the ruling coalition in Berlin,” he said. “That’s why I don’t think that the position of the ‘green’ minister would have a radical impact on the pipeline’s fate, although it’s obvious that she wouldn’t support it or speed it up.”

Even if it never starts, Nord Stream 2 has been worth it for the Kremlin's geopolitical goals because it has sowed division among EU members and between Germany, the EU and the U.S., said Meister of the German Council on Foreign Relations.

“Without being online, the pipeline has already repaid the Kremlin,” he said. “Politics and security always trump the economy in Russia.”