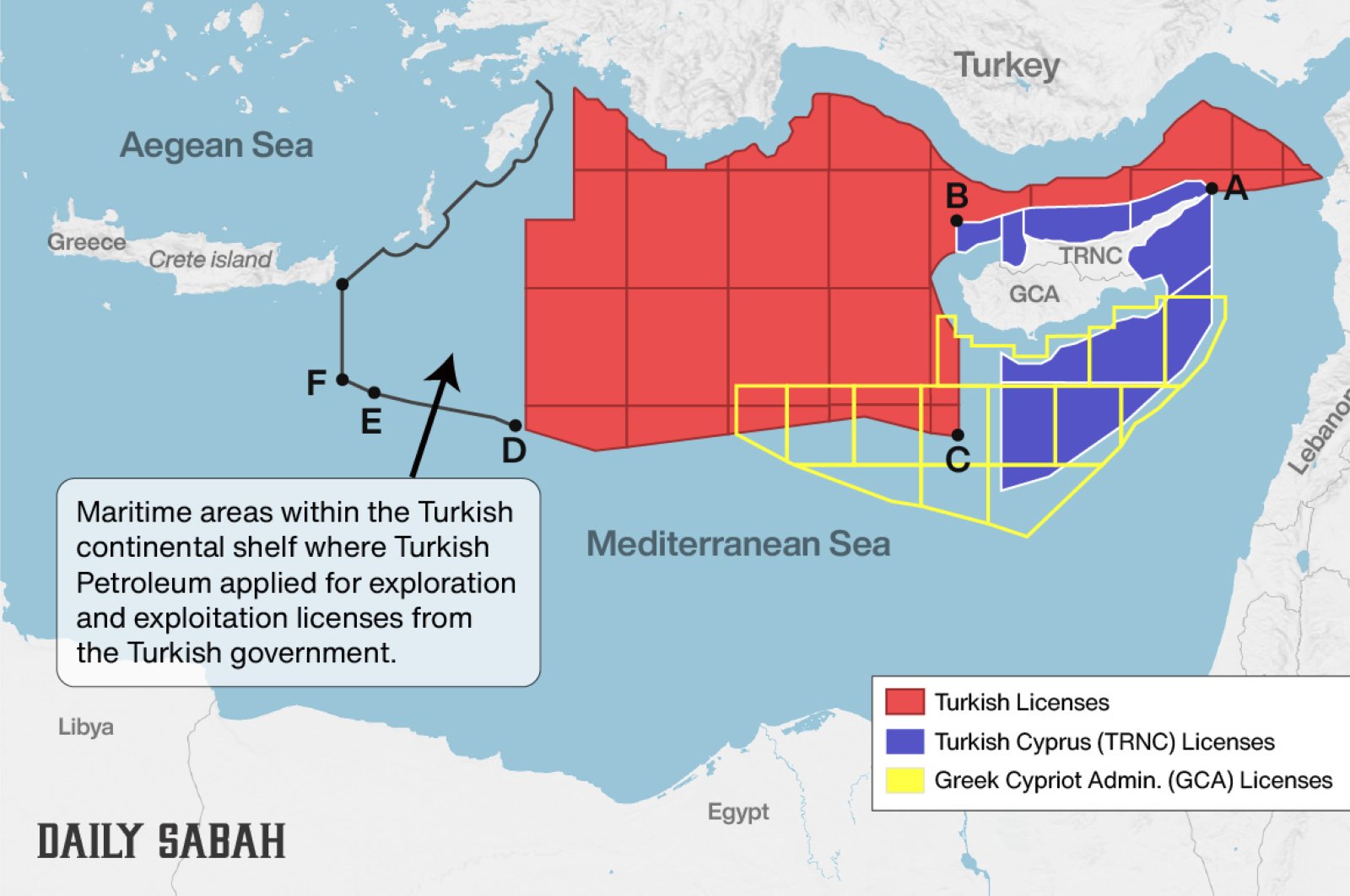 Turkey will continue protecting its rights and interests in the Mediterranean without any compromise, the country's National Security Council said on Tuesday.

"Negative approaches of some actors, who met on the common ground against Turkey, regarding Turkey's legitimate and legal steps in the Mediterranean were evaluated, and it is stated that protection of our country's rights and interests in land, sea, and air will continue without any compromise," the council, headed by President Recep Tayyip Erdoğan, said in a statement issued following its meeting.

Foreign Ministry spokesman Hami Aksoy on Tuesday also said the country is determined to "protect the rights of Turkey and Turkish Cypriots in the Eastern Mediterranean."

In a statement, Aksoy said Turkish Petroleum's recent application for a permit for additional oil exploration and drilling activities in the East Mediterranean is within the boundaries of the U.N.'s continental shelf for Turkey.

Underlining that Turkey "will resolutely continue to exercise its sovereign rights in this area," he said the country's "seismic research and drilling activities are carried out according to the previously determined program."

According to diplomatic sources, Özügergin attended a meeting at the Greek Foreign Ministry and said Turkey's position is known and transparent on various issues including hydrocarbon exploration and extraction.

Turkey has several times sought dialogue with Greece on these issues, but Athens has failed to make any response, he added.

Following Aksoy's statement, another Turkish diplomat shared a map on Twitter of areas in the Eastern Mediterranean in connection with Turkish Petroleum's recent request for new offshore survey and exploitation licenses.

Çağatay Erciyes, a senior Turkish Foreign Ministry official, also shared a map of the country's continental shelf and the borders of its Exclusive Economic Zone (EEZ) in the Eastern Mediterranean that were declared to the U.N.

The remarks also came after Turkey on Friday said it may begin oil exploration in the Eastern Mediterranean within 3-4 months as part of an agreement with the Libyan government.

Energy and Natural Resources Minister Fatih Dönmez said national oil company Turkish Petroleum (TPAO), which had applied for an exploration permit in the Eastern Mediterranean, would begin operations in areas under its license after the process was completed.

The maritime pact asserted Turkey's rights in the Eastern Mediterranean in the face of unilateral drilling by the Greek Cypriot administration, clarifying that the TRNC also has rights to the resources in the area. It went into effect on Dec. 8.

Since last year, Ankara has sent drilling vessels to the Eastern Mediterranean, asserting the right of Turkey and the Turkish Republic of Northern Cyprus (TRNC) to the resources of the region.

As a guarantor nation for the TRNC, the country has consistently contested the Greek Cypriot administration's unilateral drilling in the Eastern Mediterranean, asserting that the TRNC also has rights to the resources in the area.

The council said Turkey will resolutely continue its fight against terrorism with its operations both inside and across the border.

"The commitment to continue multi-dimensional works to protect the territorial integrity of Syria, to clear the region of terrorist organizations and return of Syrians to their countries was reiterated," it added.

Since 2016, Turkey has launched three successful anti-terror operations across its border in northern Syria to prevent the formation of a terror corridor and enable peaceful settlement by locals: Euphrates Shield (2016), Olive Branch (2018) and Peace Spring (2019).

In its more than 30-year terror campaign against Turkey, the PKK – listed as a terrorist organization by Turkey, the U.S. and EU – has been responsible for the deaths of 40,000 people, including women, children, and infants. The YPG is the PKK's Syrian offshoot.

Libya's internationally recognized government, the GNA, has been under attack by putschist Gen. Khalifa Haftar's forces since April 2019.

Libya has been in a civil war since the ouster of late ruler Moammar Gadhafi in 2011. Libya's new government was founded in 2015 under a U.N.-led agreement, but efforts for a long-term political settlement failed due to the military offensive by Haftar's forces.

The meeting also underlined the success of Turkey's health, economy, food, technology, public order and security during the fight against the coronavirus pandemic.

Turkey’s COVID-19 death toll rose by 22 to 4,585 on Tuesday as 786 new cases were confirmed in the past 24 hours, Health Minister Fahrettin Koca announced.

Daily coronavirus infections dropped for the fifth straight day in Turkey as the total cases exceeded 165,000.

In the past 24 hours, 974 more patients recovered from COVID-19, while the total number of recovered patients approached 130,000, Koca said on Twitter.

The pandemic has killed over 376,800 people worldwide, with more than 6.31 million confirmed cases, while recoveries surpassed 2.72 million, according to figures compiled by the U.S.' Johns Hopkins University.