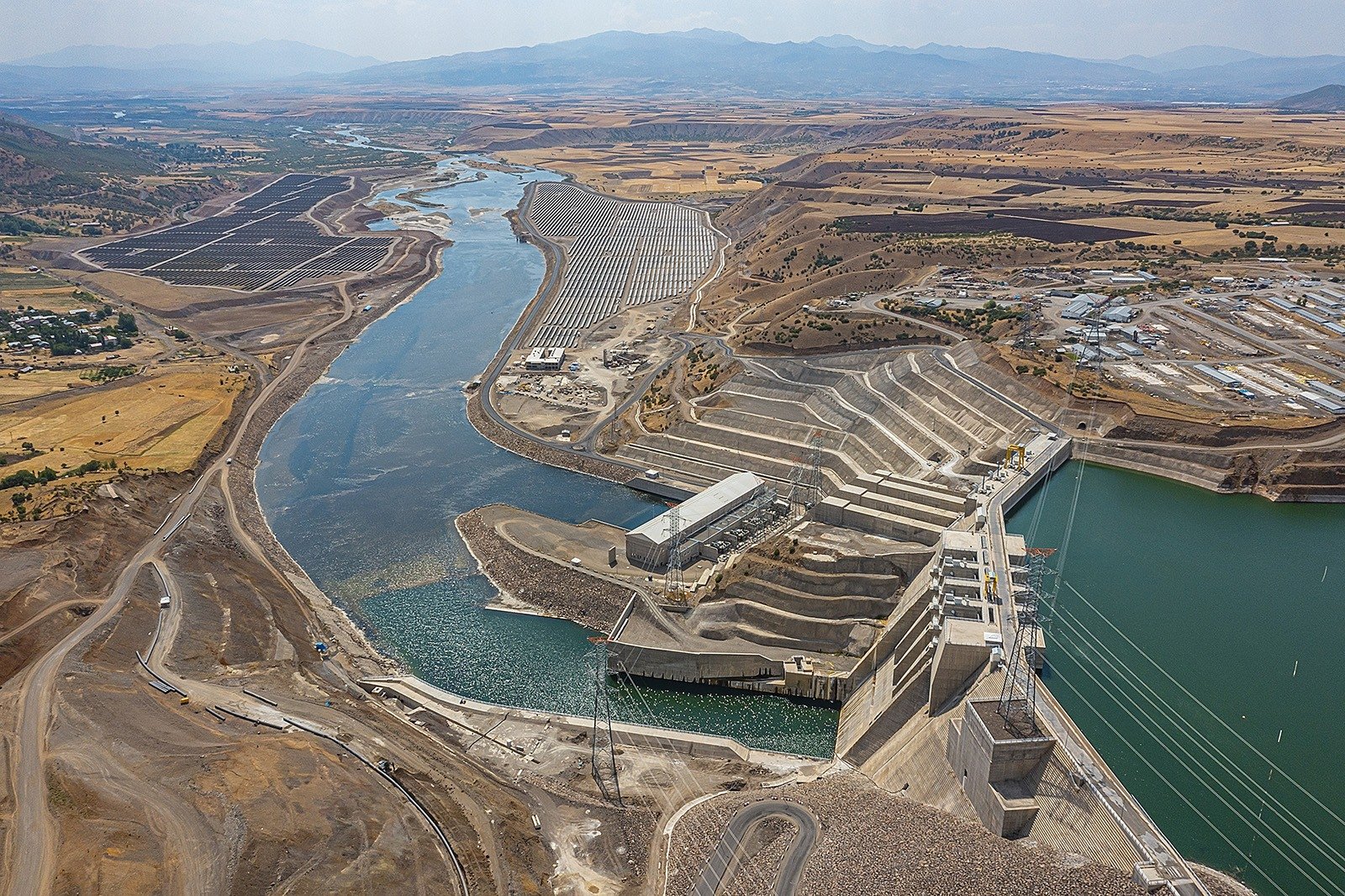 A dam built over the Murat River and a hydroelectric power plant are seen in the eastern Bingöl province, Turkey, July 27, 2021. (IHA Photo)
by DAILY SABAH WITH AA Jul 28, 2021 12:27 pm
RECOMMENDED

The growth of wind and solar electricity generation in Turkey in the first half of the year has steadily increased by 12.9%, placing Turkey 17th among European countries, the latest report from Ember, a London-based think tank, showed Wednesday.

However, the share of hydropower, which constitutes the major share of the country’s clean electricity, saw its lowest share in seven years at 21% due to water shortages that hindered the production capacity of hydropower plants.

Ember’s report covering European electricity generation in the first half of the year cited the drought as one of the biggest obstacles in Turkey for a fossil-fuel-free future.

Turkey’s share of wind and solar in 2020 reached 12.2% of total electricity generation, while hydropower accounted for 33.6%.

"Turkey performed better than a number of countries in wind and solar electricity in the last year. However, clean power is still very much dependent on hydroelectricity, and thus the share of fossil fuels and carbon intensity increase in drought years," Ufuk Alparslan, energy analyst at Ember, said.

Turkey ranked 18th in clean power among European countries in the first half of this year, dropping down from 10th place last year.

As a solution to bolster hydropower, Alparslan advised the use of hybrid installations at hydropower plants, using floating solar plants, which would boost electricity generation while also offering some protection from droughts.

The average share of hydropower of Turkey’s electricity generation in the first five years out of the last 10 years was 27.2%, according to the report.

The tangible drought Turkey has faced as of 2020 ramped up power generation from natural gas as an arid rainy season left the water levels in dams at historically low levels.

In Europe, progress has been made in emissions reduction, with Europe’s power sector emissions at 12% below pre-pandemic levels in the first half of 2021.

"Now that the pandemic's effect on the power sector has passed, the overall trend is clear: fossil fuels are in rapid decline as Europe cleans up its power sector,” said Ember’s Europe Lead Charles Moore.

Nonetheless, he warned that progress is nowhere near fast enough to meet the EU’s own emissions target, let alone reach 100% clean electricity by 2035.

“There’s never been a better time to accelerate the transition to wind and solar, as the costs of sticking with fossils are painfully clear,” he said.

According to the report, in the first half of 2021, Europe’s electricity demand was back to pre-pandemic levels.

Electricity generation from fossil fuels remained 10% lower than before the pandemic due to the 11% growth rate in renewable energy.

The report said fossil fuels could have fallen further, but nuclear output also declined by 8%. Overall, coal power was more affected, declining by 16% compared to a 4% drop in fossil gas.

The analysis showed it is now twice as expensive to generate electricity from existing fossil gas and hard coal power plants than new wind and solar plants in Germany, Spain, France and Italy.

Across the EU, fossil gas prices have almost doubled in the first half of this year, while imported hard coal prices surged by 70%.

In comparison, coal generated just 14% of Europe’s electricity and has almost halved since 2015.

"Renewables retained their lead over fossils as Europe’s main source of electricity, a milestone reached for the first time in 2020,” Ember noted.

In the last five years, the share of clean electricity increased year-on-year by an average of 1.2%

However, the report revealed that the EU has to double this progress throughout the next decade to reach its 2030 climate targets by reducing carbon dioxide emissions by 55% and 100% clean power by 2035.