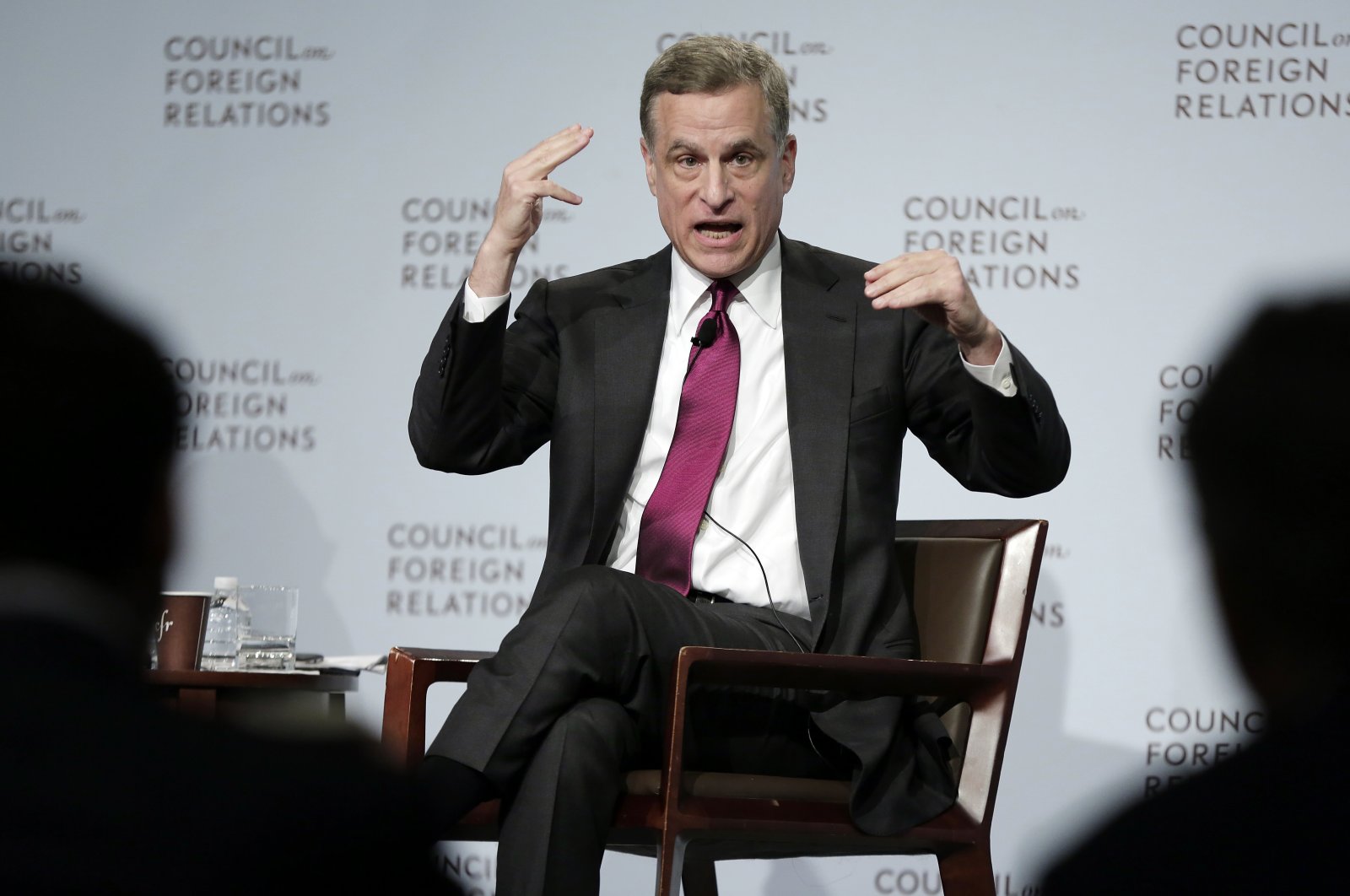 Federal Reserve Bank of Dallas President Robert Kaplan speaks to a breakfast meeting at the Council on Foreign Relations, in New York, U.S., May 31, 2017. (AP Photo)
by Agencies Sep 28, 2021 8:50 am
RECOMMENDED

In a rare moment of ethical controversy for the U.S. Federal Reserve (Fed), two top officials resigned Monday in the wake of revelations about their financial trading that exposed potential shortcomings in the Fed's rules on investments.

Robert Kaplan, the president of the Dallas Fed, said he will retire on Oct. 8, citing the "distraction" of the controversy over his investments. Boston Fed President Eric Rosengren said he will step down on Sept. 30, pointing to a long-term health condition.

The two officials’ financial disclosures sparked criticism from government watchdogs after they revealed extensive stock trading in 2020, when the Fed was spending trillions of dollars stabilizing financial markets and boosting the economy. Because of their trading, the two officials could potentially have profited from the Fed’s actions.

Though the investments by Rosengren and Kaplan were permitted under the Fed’s rules, they raised at least the appearance of conflicts of interest, which Fed policy discourages. Sen. Elizabeth Warren, a Massachusetts Democrat, sharply criticized the trades and called for a ban on stock ownership by Fed officials.

Fed Chair Jerome Powell, who is nearing the end of his term and under consideration for reappointment as Fed chief, will testify Tuesday before the Senate Banking, Housing and Urban Affairs Committee, which includes Warren, and will likely face questioning about the Fed's ethics rules. The resignations will give Powell a specific response he can point to, observers said.

“The departure of Rosengren and Kaplan should ease pressure on Powell, who notably failed to express confidence in the two presidents” at a news conference last week, said Krishna Guha, an analyst at the investment bank Evercore ISI.

The presidents of the 12 regional banks participate in the Fed’s private policymaking meetings, in which they discuss the central bank’s interest-rate policies and are privy to economic data not always available to the public. The Fed’s decisions can cause sharp swings in financial markets. So can the presidents’ speeches and comments to the media.

Fed Chair Jerome Powell said last week that the Fed would change its ethics policies in the wake of the disclosures. Yet the Fed may still face pressure to allow an outside investigation into whether the two officials, or any others, traded based on inside information about the Fed's actions.

“After this egregious breach of public trust, nothing but a full investigation and a referral to the (Securities and Exchange Commission) is acceptable,” said Jeff Hauser, director of the Revolving Door Project, a nonprofit group that monitors government appointments.

Last year, Kaplan made trades worth at least $1 million in 22 stocks and index funds, including Amazon, Chevron, Facebook and Johnson & Johnson.

“The Federal Reserve is approaching a critical point in our economic recovery as it deliberates the future path of monetary policy,” Kaplan said in a written statement. “Unfortunately, the recent focus on my financial disclosure risks becoming a distraction.” Kaplan said he would resign Oct. 8.

Rosengren had invested in funds that owned mortgage-backed bonds, the same kind that the Fed has been buying hundreds of billions of dollars’ worth this year.

Rosengren said he became eligible last year for a kidney transplant and said the stress of working at the Fed during the pandemic recession worsened his health.

“It has become clear that I should aim to reduce my stress so that I can focus on my health issues,” he said.

Rosengren and Kaplan were not voting members of the Fed's policymaking committee this year, but they contributed to forecasts of the Fed’s interest rate policy, which last week showed the Fed was considering hiking its short-term rate, currently at nearly zero, by the end of 2022. That was a shift from June, when the Fed's projections did not show any hike until 2023.

Powell's own financial disclosures show that he owned municipal bonds in 2020, even though the Fed began purchasing such bonds for the first time last year in order to stabilize that market. Powell, who was a private equity executive before being appointed to the Fed's board in 2012, said last week he had owned munis for years and cleared his continued ownership with the Office of Government Ethics.

At last week's press conference, Powell touched on a reason that these ethics concerns have flared: Previously, municipal bonds were seen as a safe asset for Fed officials to own, because the Fed didn't buy or sell them. Yet last year it did, and it also began buying corporate bonds for the first time.

Kaplan, 64, was hired to lead the Dallas Fed just over six years ago. The son of a traveling jewelry salesman, Kaplan had taught at Harvard Business School for about 10 years and before that was an executive at Goldman Sachs, where he worked for 23 years.

Rosengren, a PhD economist, has been the president of the Boston Fed since 2007, and has been part of its staff since 1985. Prior to becoming president, he was head of the bank's supervision and regulation division.

Dallas Fed First Vice President Meredith Black will serve as interim president after Kaplan steps down. The Boston Fed’s first vice president, Kenneth C. Montgomery, will take over as interim president during the search for Rosengren's replacement, which is already underway given his approaching retirement date.

Fed regional bank presidents are chosen by the six members of each bank's board of directors who are not bankers. Directors who are affiliated with banks are prohibited by law from participating.

The back-to-back resignations leave a suddenly wider opening for a potential overhaul of Fed leadership.

U.S. President Joe Biden is assessing whether to reappoint Powell and is poised to nominate as many as three others to the seven-member Washington-based Board of Governors, a group long criticized for mostly being comprised of white men.

The departure of the two Fed bank presidents could allow for a more diverse group of regional bank presidents, who are chosen by local boards of directors with the approval of the Fed governors. Currently, seven of 12 bank presidents are white men, three are white women, and two are non-white men.