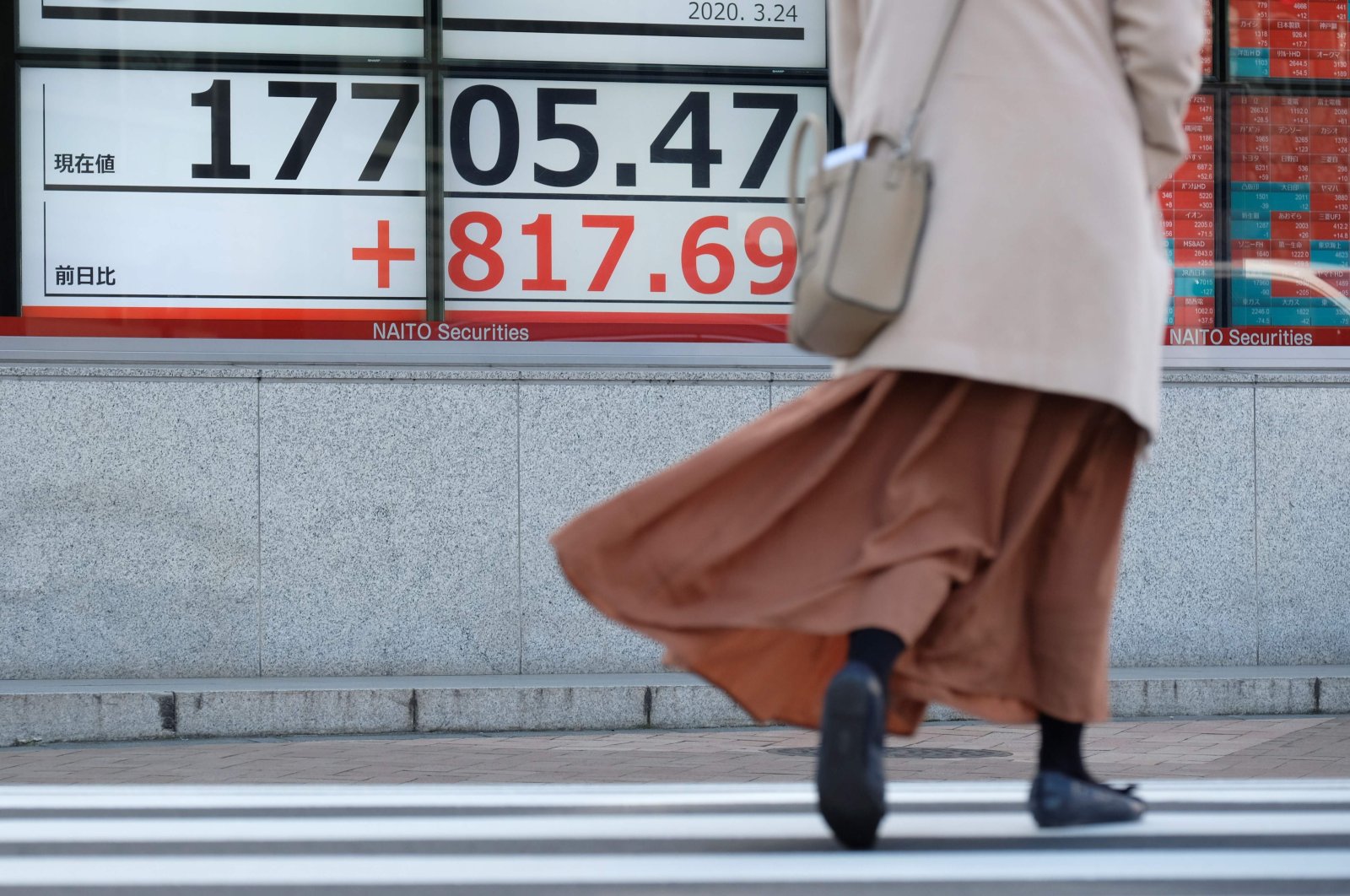 A pedestrian walks past a quotation board displaying the share price numbers during morning trading on the Tokyo Stock Exchange in Tokyo, March 24, 2020. (AFP Photo)
by Associated Press Mar 24, 2020 9:30 am
RECOMMENDED

Traders were encouraged by the Fed's promise to buy as many Treasurys and other assets as needed to keep financial markets functioning.

That came as Wall Street fell 3% after Congress failed to approve an economic support package. It would send checks to U.S. households and offer support for small businesses and the hard-hit travel industry, but Democrats say it favors companies too heavily at the expense of workers and public health.

“Asian investors like what they see from an all-in Fed which is being viewed in a very impressive light for both Main and Wall Street even as the U.S. congress dithers,” said Stephen Innes of AxiCorp. in a report.

In initial deals, London's benchmark FTSE 100 index rose 3.8% to 5,183.12 points, after Britain became the latest nation to impose a lockdown to combat COVID-19.

Also Tuesday, a measure of this month's Japanese factory activity fell to its lowest level since 2009 in another sign of the coronavirus's impact. The preliminary version of the Jibun Manufacturing Purchasing Managers' Index fell to 44.8 from February's 47.8 on a 100-point scale on which numbers below 50 show activity contracting.

The Fed's promise goes beyond the $700 billion in asset purchases announced last week.

The central bank said it will buy a wide range of investments, including corporate bonds for the first time, to improve trading in markets that help home buyers finance the purchase of houses, state and local governments borrow and businesses to get enough short-term cash to make payroll.

“The pressure is now on Congress to get its act together and provide the support that the Fed cannot do — helping the vulnerable people who face the biggest health and economic consequences," said James Knightley of ING in a report.

“The risk is that this wall of support from the Fed and the positive reaction in markets may give Congress a sense that it has more time and the pressure to deliver a package is reduced,” Knightley said.

As Congress was locked in stalemate, the number of known infections worldwide jumped past 380,000. After just a few weeks, the United States has more than 46,000 cases and more than 600 deaths.

For most people, the coronavirus causes only mild or moderate symptoms, such as fever and cough. Those with mild illness recover in about two weeks. Severe illness including pneumonia can occur, especially in the elderly and people with existing health problems. Recovery could take six weeks in such cases.

Also Monday, trading on the New York Stock Exchange went all-electronic for the first time after the trading floor was temporarily closed as a precaution. The exchange announced the move last week after two employees tested positive for the virus. The number of floor traders had dwindled sharply in recent years as more trading become electronic.

Wall Street and some other stock markets have lost nearly one-third of their value over the past month as business shutdowns spread and airlines, retailers and other industries suffer rising losses.

Economists increasingly say a recession seems inevitable. Analysts are slashing their forecasts for upcoming corporate profits. Forecasters say they cannot project how deep the downturn might be or how long it will last.

Professional traders say investors need to see a decline in numbers of new infections before markets can find a bottom.

Congress debated through the weekend on the rescue plan, but White House officials and congressional leaders are struggling to finalize it. Democrats blocked a vote to advance the package Monday. They want to steer more assistance for public health and workers.