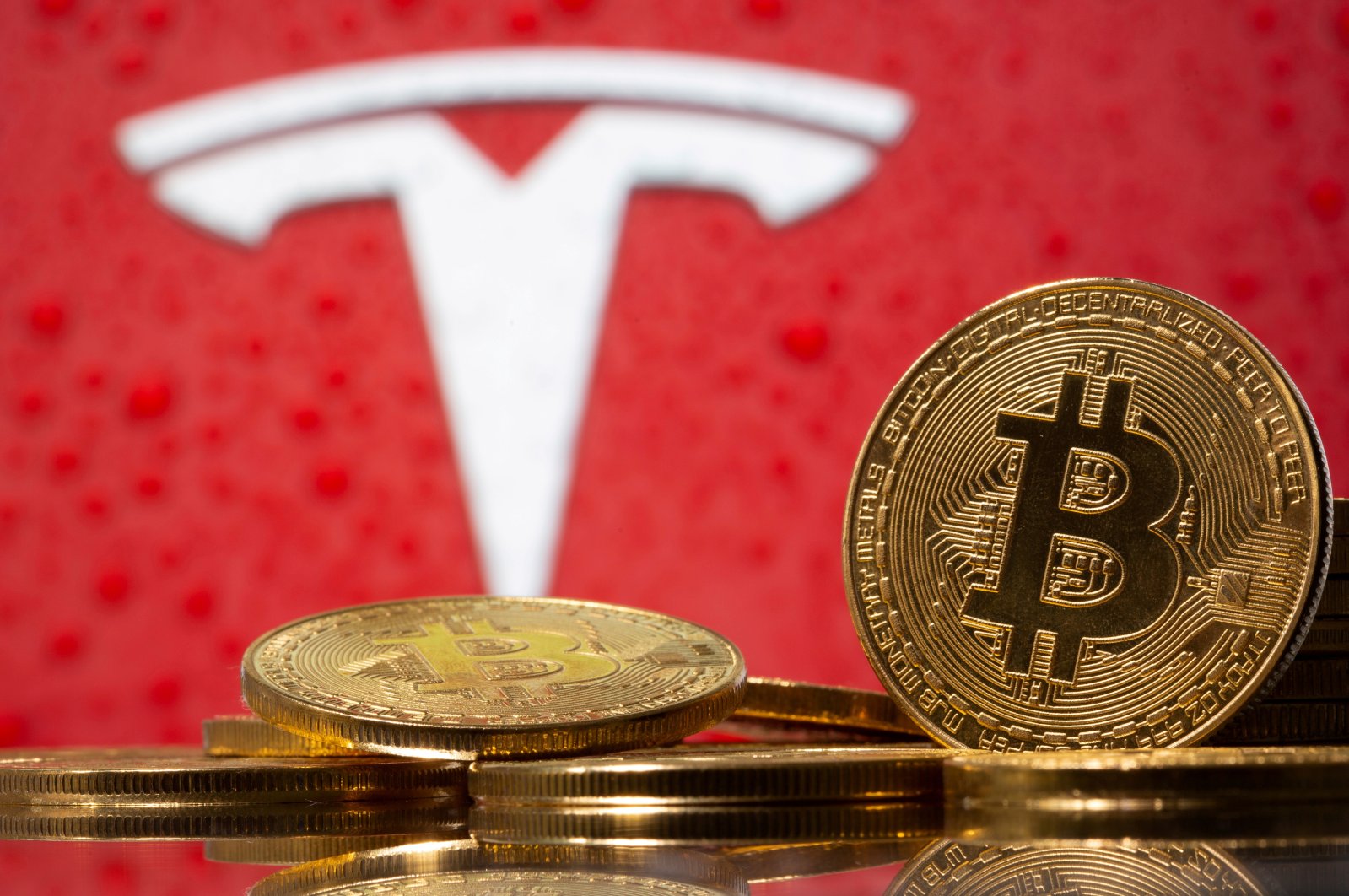 Representations of virtual currency Bitcoin are seen in front of Tesla logo in this illustration image, Feb. 9, 2021. (Reuters Photo)
by REUTERS May 13, 2021 10:12 am
RECOMMENDED

Bitcoin price topped $50,000 in Asian trade Thursday, recouping some of the 17% loss that followed Elon Musk's announcement that Tesla would no longer accept the cryptocurrency as payment for its cars.

The price of the world's largest cryptocurrency dropped from around $54,819 to $45,700, its lowest since March 1, in just under two hours following the tweet shortly after 10 p.m. GMT. It recovered about half of that drop early in the Asian session, and last traded about $51,099.

Ether, the world's second-largest cryptocurrency, followed a similar pattern, dropping 14% to touch a low of $3,550, before bouncing back above $4,000.

"We are concerned about rapidly increasing use of fossil fuels for Bitcoin mining and transactions, especially coal, which has the worst emissions of any fuel," Musk wrote.

Tesla's announcement on Feb. 8 that it had bought $1.5 billion of bitcoin and that it would accept it as payment for cars has been one factor behind the digital token's surging price this year.

As a result, Musk's comments roiled markets even though he said Tesla would not sell any bitcoin and would resume accepting the cryptocurrency as soon as mining transitioned to more sustainable energy.

The digital currency is still 30% higher than before Tesla's February announcement.

At current rates, bitcoin mining devours about the same amount of energy annually as the Netherlands did in 2019, data from the University of Cambridge and the International Energy Agency showed.

"The issue (of huge energy use by bitcoin miners) has been long known so it's nothing new, but taken together with Musk's recent comments about dogecoin, his latest comments seems to suggest his passion for cryptocurrencies may be waning," said Makoto Sakuma, researcher at NLI Research Institute in Tokyo.

Cryptocurrency dogecoin lost more than a third of its price on Sunday after Musk, whose tweets had stoked demand for the token earlier this year, called it a "hustle" on the "Saturday Night Live" comedy show. On Tuesday, however, he was asking his followers on Twitter if they wanted Tesla to accept dogecoin.

A broader selling of risk assets in traditional markets was another factor in the plunge, said Jeffrey Wang, Vancouver-based head of Americas at Amber Group, a cryptocurrency service provider.

"I don’t think everything is selling off just because of this news. This was kind of the straw that broke the camel’s back in terms of adding to the risk sell-off," he said.

Smaller cryptocurrencies were less affected by the news.

"The reason given in the tweet is fossil fuel use for the mining of BTC, but most cryptocurrencies have already found more efficient ways to do that and therefore outperformed."

By contrast, ether soared to a record $4,180.12 on Wednesday, and, even with the current pullback, is up 435% in 2021, eclipsing bitcoin's 75% rise. Its popularity stems in part from the ethereum network's growing number of uses, including non-fungible tokens (NFTs), which are used to certify unique ownership of things like online artwork.

The bitcoin dominance index, a ratio of bitcoin’s share of the total market cap of all cryptocurrencies, dropped to 42%, its lowest since June 2018.

"The trade we’ve been pushing for a while now is short bitcoin, long ether, and that trade has been a thing of beauty," said Chris Weston, head of research at broker Pepperstone in Melbourne.

"The question everyone is asking is at what stage will ether have a bigger market cap than bitcoin, and I think that day will come personally."