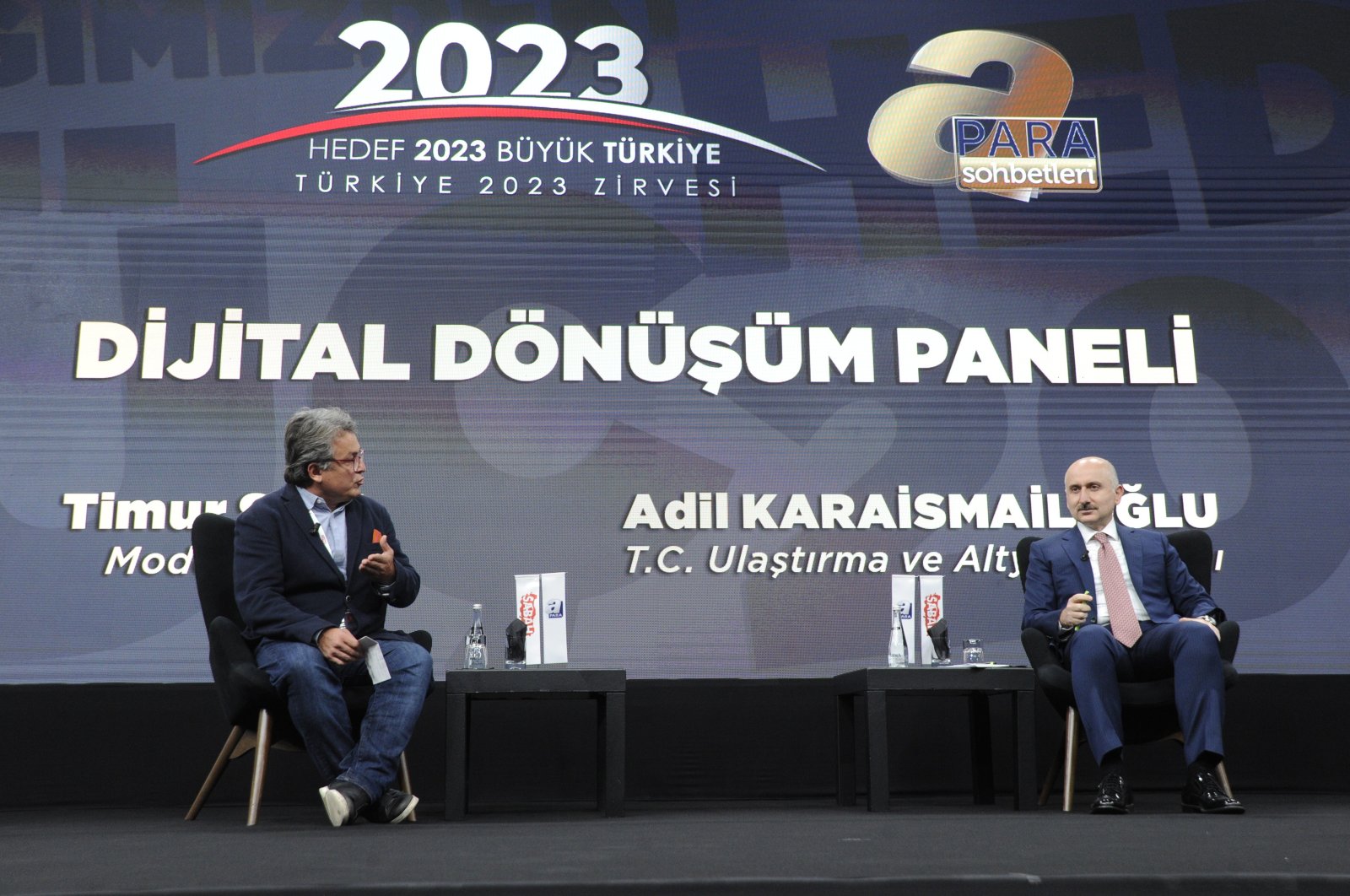 The term digital transformation has been among Turkey’s priorities, which it believes would help unleash the country’s potential as it moves toward its 2023 vision, marking the centenary of the Republic of Turkey.

In their speeches at the third Turkey 2023 Summit, organized by Turkuvaz Media Group’s Sabah daily on Thursday, Transport and Infrastructure Minister Adil Karaismailoğlu and Environment and Urbanization Minister Murat Kurum reiterated the government’s determination to spread the applications that will accelerate the country’s digital transformation and improve citizens’ lives.

The digital transformation is accelerating unpredictably, especially with the pandemic process, and its value is multiplying, Karaismailoğlu said.

The government’s 2023 vision includes specific targets for a full-fledged improvement of the country's economy via tailor-made energy, technology, health care, transport and infrastructure projects to make Turkey one of the top 10 global economies.

“As Turkey, we are experiencing the digital transformation at the highest level on land, in air, sea and space with our satellites that we send to orbit,” the minister stressed.

“It is necessary to integrate aircraft, trains, even cars and buses together. To connect them together, we have an intensive study that combines independent applications. We will bear the fruit of these in the coming days,” he added.

“As Turkey, we are preparing our infrastructure for this. The most important issue here is to use domestic and national technologies... We are continuing our preparations for 5G quickly. When the time comes, we will also shift to 5G together with the world,” Karaismailoğlu said.

The 5G networks will offer faster speeds and more reliable connections on smartphones and other devices.

Türksat 5A satellite to be launched in November

On the other hand, Turkey on Oct. 2 took delivery of its Türksat 5A satellite, Karaismailoğlu said. It looks to launch the broadcast satellite into space on Nov. 30, he announced.

“Our power in space will also begin to increase. In this way, our broadcasting power will increase. And when we send 5B into space in mid-2021, our internet network will be much stronger. We plan to integrate all of this into our lives,” he said.

The country aims to launch the Türksat 5B in the second quarter of 2021.

The government has been conducting smart city projects with the support of local institutions.

The Industry and Technology Ministry signed a cooperation agreement with the Environment and Urbanization Ministry and Istanbul’s Esenler district to establish a smart city in an 8 million-square-meter (86.1 million-square-foot) area.

The project looks to be the center for electric cars, autonomous vehicles, information technologies and software.

Karaismailoğlu also noted projects that are being conducted from smart cities, stressing that micromobility works were progressing intensively.

“This is very important to us. Our country is very, very ahead in smart city design and development. Now we make our highways in the form of smart highways. In this way, we try to use our road capacities with maximum benefit. I would say that our country is very ambitious in terms of urban transport and smart city building. These are projects that will make our lives easier,” he said.

Environment and Urbanization Minister Kurum said that with the smart cities' action plan, they are preparing the 81 provinces of Turkey for the future with new technologies.

All smart cities will be connected to each other with the action plan, he said.

The minister noted that today, it is time to speak of the smart municipalities as the cities that are not able to catch up to the times are doomed to lose their attractiveness.

“While preserving our history, we will catch up to the future with investments that are set to meet the changing needs,” Kurum said.

He stressed that the digitalization era necessitates the use of smart systems and that they are now preparing the cities for this transformation. The minister reiterated that a road map and an action plan were announced on Dec. 24, 2019.

Kurum said that the smart cities’ global market value is expected to reach $826 billion in 2024, noting that Turkey will present its smart city applications to global markets by 2023, enabling them to contribute up to $30 billion to the national economy.

“We will produce smart city technologies in our seven geographical regions,” he added.

Commenting on the development of Turkey’s first fully indigenous and fully electric car, the minister noted that there will be charging stations across the country that are included in the construction plans.

He added that the telecommunication firm is now investing in 5G, along with the technologies and infrastructure that will allow new generation technologies to be commissioned within the country.

“5G and technologies beyond that are prominent in the country’s digital transformation,” he added.

Murat Erkan, chairperson of Turkcell, said that the pandemic has shown the strategic importance of telecommunications, noting that the industry operates as a fundamental sector intertwined in the business of many other sectors.

Speaking at the summit, Türksat Satellite Communications and Cable TV Operations Company (Türksat A.Ş.) General Manager Cenk Şen emphasized that today the transformation of the technology has a rapid pace and that the companies should catch up with its speed, like getting ready for 5G.

Vodafone Turkey Deputy CEO Hasan Süel noted that the COVID-19 pandemic has fueled online businesses, adding that it is necessary to promote investments in the field to contribute to the digital transformation.