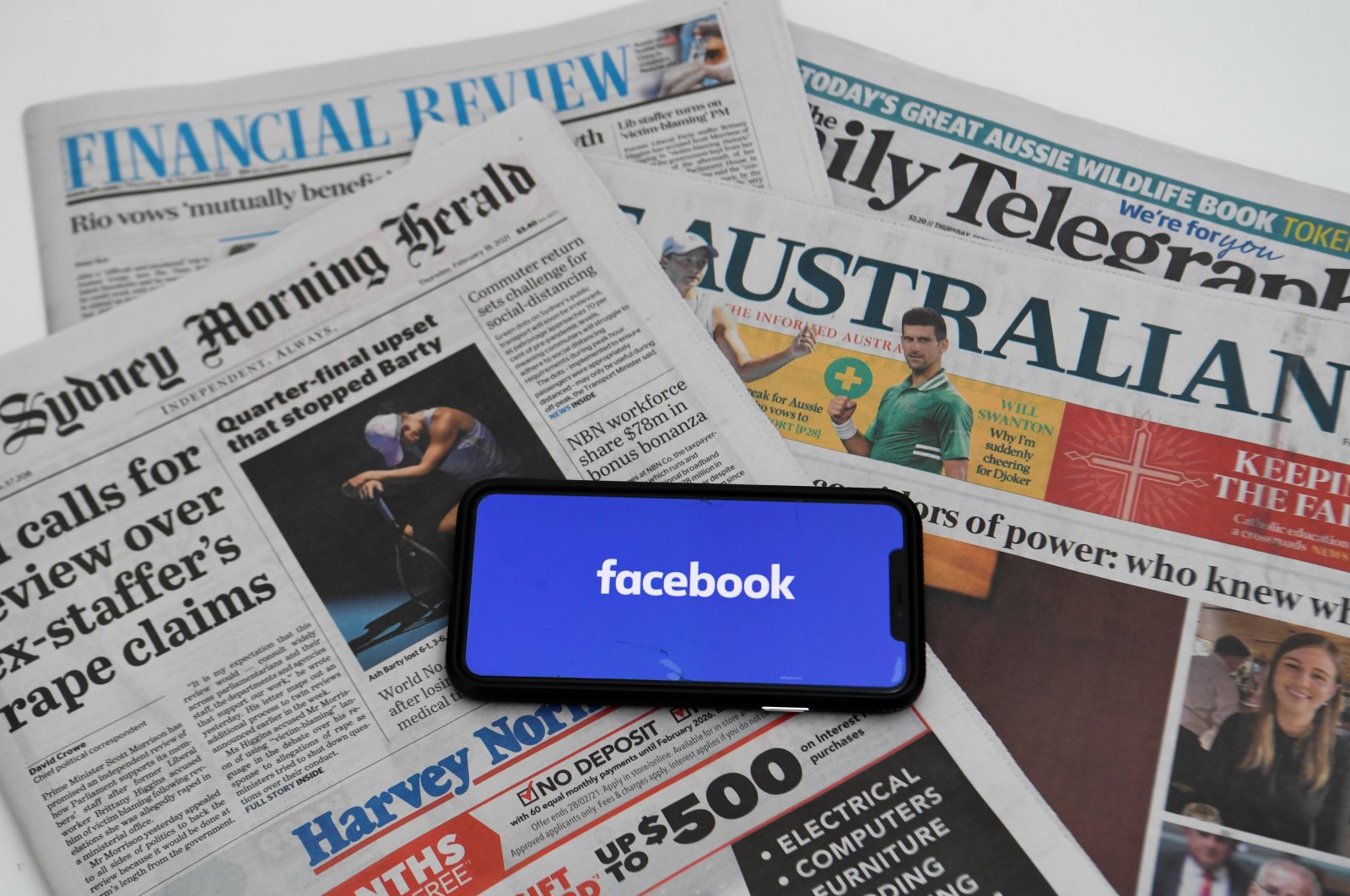 An illustration image shows a phone screen with the "Facebook" logo and Australian newspapers in Canberra, Australia, Feb. 18, 2021. (Reuters Photo)
by REUTERS Feb 18, 2021 11:44 am
RECOMMENDED

While Big Tech and media outlets have battled over the right to news content in other jurisdictions, Australia's looming law that would make the tech giants like Google and Facebook pay media publishers for content represents the most expansive reform and is being closely watched around the world. Facebook Inc, in a surprise and dramatic escalation of a dispute with the government over paying for content blocked all media content in the country Thursday.

The move was swiftly criticized by news producers, politicians and human rights advocates, particularly as it became clear that official health pages, emergency safety warnings and welfare networks had all been scrubbed from the site along with news.

“Facebook’s actions to unfriend Australia today, cutting off essential information services on health and emergency services, were as arrogant as they were disappointing,” Prime Minister Scott Morrison wrote on his own Facebook page, using the vernacular for cutting ties with another person on the site.

“These actions will only confirm the concerns that an increasing number of countries are expressing about the behavior of Big Tech companies who think they are bigger than governments and that the rules should not apply to them.”

Facebook’s dramatic move represents a split from Alphabet Inc-owned Google after they joined together for years to campaign against the laws. Both had threatened to cancel services in Australia, but Google has instead sealed preemptive deals with several outlets in recent days.

Rupert Murdoch’s News Corp was the latest to announce a deal in which it will receive “significant payments” from Google in return for providing content for the search engine’s News Showcase account.

The Australian law would require Facebook and Google to reach commercial deals with news outlets whose links drive traffic to their platforms or be subjected to forced arbitration to agree on a price.

Facebook said in its statement that the law, which is expected to be passed by parliament within days, “fundamentally misunderstands” the relationship between itself and publishers and it faced a stark choice of complying or banning news content.

The tech giant has said news makes up just 4% of what people view on its website, but for Australians Facebook’s role in news delivery is growing. A 2020 University of Canberra study found 21% of Australians use social media as their primary news source, up 3% from the previous year, while 39% of the population uses Facebook to receive news. The same study said 29% of Australian news video content is consumed on Facebook.

The changes made by Facebook wiped clean pages operated by news outlets and removed posts by individual users sharing Australian news, three days before the country begins a nationwide vaccination program to slow the spread of COVID-19.

The Facebook pages of Nine and News Corp, which together dominate the country’s metro newspaper market, and the government-funded Australian Broadcasting Corp, which acts as a central information source during natural disasters, were blank.

Also affected were several major state government accounts, including those providing advice on the coronavirus pandemic and bushfire threats at the height of the summer season, and scores of charity and nongovernmental organization (NGO) accounts.

“Demand for food relief has never been higher than during this pandemic, and one of our primary comms tools to help connect people with #foodrelief info & advice is now unavailable,” tweeted Brianna Casey, chief executive of hunger relief charity Foodbank.

“Hours matter when you have nothing to eat. SORT THIS OUT!”

A News Corp spokesperson did not respond to a request for comment. An advertisement on News Corp’s main Australian news site said, “You don’t need Facebook to get your news," alongside a link to the company’s smartphone app.

By mid-afternoon, many government-backed Facebook pages were restored but several charity pages and all media sites remained dark, including those of international outlets like the New York Times, the BBC, News Corp’s Wall Street Journal and Reuters.

A Facebook representative in Australia did not reply to a request for comment on the situation. A later Facebook statement said the ban should not affect government pages but “as the law does not provide clear guidance on the definition of news content, we have taken a broad definition."

Facebook’s own page was down for several hours in Australia before being restored.

“This is an alarming and dangerous turn of events,” said Human Rights Watch (HRW) in a statement. “Cutting off access to vital information to an entire country in the dead of the night is unconscionable.”

Australia has previously engaged in lengthy battles with major corporations. In 2012, the then center-left government became the first in the world to prohibit cigarette companies from using designs on their packaging to attract consumers. Big Tobacco companies mounted legal challenges but the courts ultimately upheld the law.