Hepsiburada valued at $3.9B in Turkey’s first Nasdaq IPO 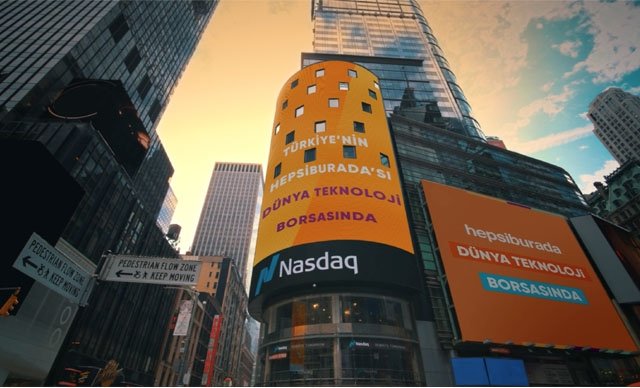 The logo of Hepsiburada is pictured on the display outside the Nasdaq Market Site in Times Square on the day of the company's IPO in New York, U.S., July 1, 2021. (DHA Photo)
by DAILY SABAH WITH AGENCIES Jul 01, 2021 3:31 pm
RECOMMENDED

Hepsiburada, a top player in Turkey’s fast-growing e-commerce sector, became the first Turkish company to list on the Nasdaq stock exchange Thursday, in a move to raise funds it plans to use to expand at home and in neighboring countries.

Hepsiburda was valued at $3.9 billion (TL 33 billion) in the initial public offering (IPO), said Hanzade Doğan, the founder and chairperson.

The company priced its shares at $12, the midpoint of its $11-$13 range, Doğan told a media briefing shortly before the first trade.

“I believe the company will make great strides in the next five to 10 years. That’s why I’m not selling any shares on the IPO, and neither are my sisters,” she said.

The company will raise around a net $470 million, all of which will be invested in the company to expand in the fast-growing Turkish e-commerce market, Doğan said.

“We will invest the proceeds in our logistics and last-mile delivery services, aiming for the most user-friendly system, giving customers peace of mind,” she said.

Along with a share sale by existing shareholder Franklin Templeton, the total IPO size was around $740 million.

Hepsiburada is also eyeing expansion outside Turkey, though the focus will be on its core market.

“Keeping in mind our local market’s proximity and our own capabilities, we are looking at the Middle East, North Africa, Balkans and some Eastern European countries,” Doğan said.

Hepsiburada operates not only an online marketplace but also its own logistics network, a last-mile delivery service for groceries, its own online payments system, a travel booking service and an inbound international courier service.

The company's listing comes after it more than doubled revenue as COVID-19 measures and stay-at-home orders led to a surge in online shopping.

Its gross merchandise value, a benchmark of trade on its marketplace, rocketed 89% to TL 17 billion last year.

The growth also brought an increase in its employment capacity. In 2020, Hepsiburada.com's employees increased from 1,218 to 2,432. By the end of the first quarter of this year, the figure had risen to 2,572.

Hepsiburada shares were to begin trading Thursday on the Nasdaq stock exchange with the ticker HEPS.

Doğan and the Doğan family will hold 65.4% and Franklin Templeton’s stake will be reduced to 14.6% after the listing.