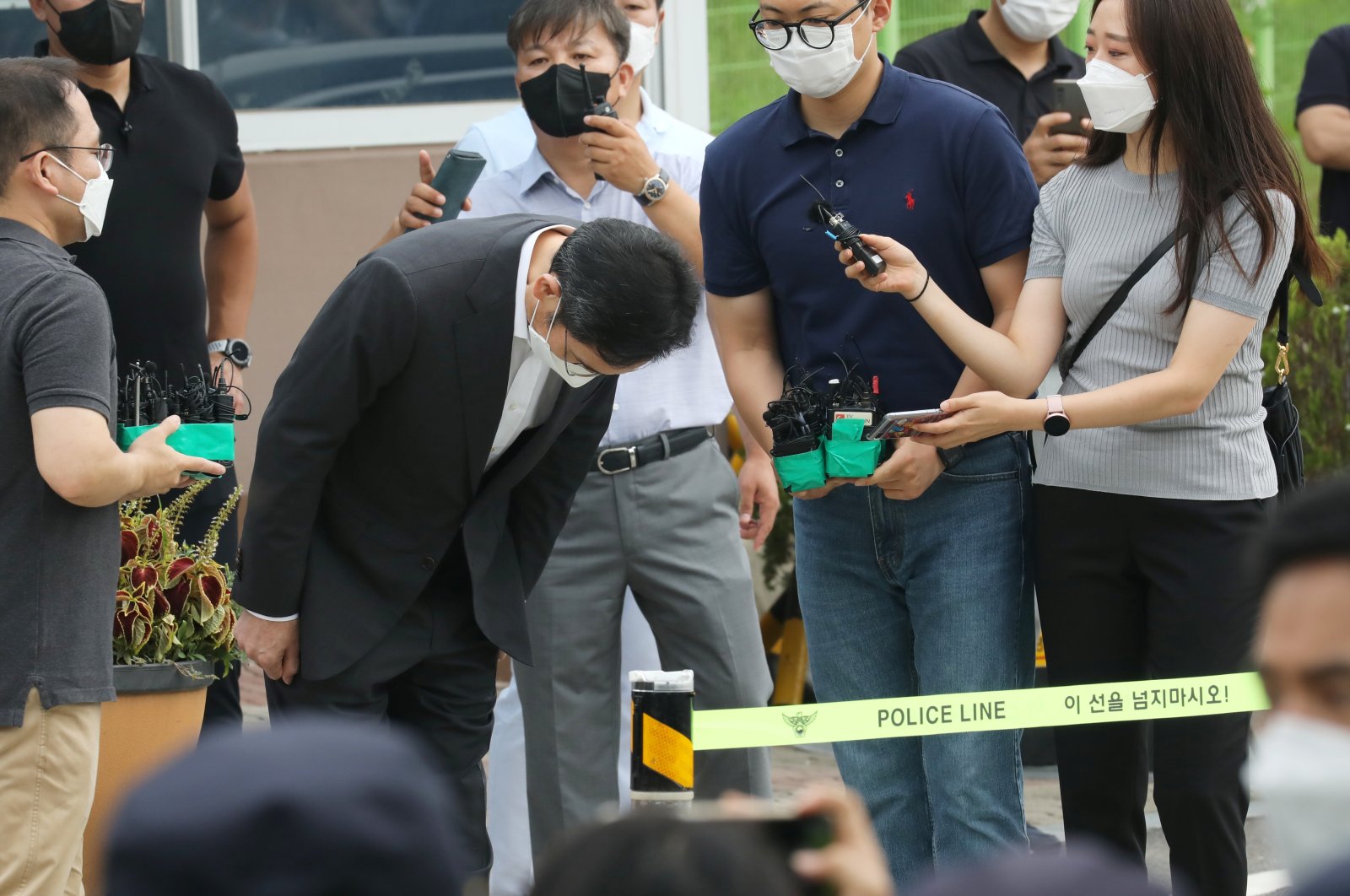 Samsung head Lee Jae-yong walked out of prison Friday, a year early in a parole decision demonstrating the conglomerate's immense influence in South Korea as well as continuing leniency for bosses who commit corporate corruption.

Wearing a gray suit and a mask, Lee left the prison near Seoul to a barrage of camera flashes and bowed in apology over the anger ignited by his case, which was related to the explosive corruption scandal that toppled South Korea’s previous president in 2017. Hundreds of demonstrators standing behind police lines simultaneously shouted slogans denouncing or welcoming his release.

“(I) caused too much concern to our people. I am very sorry,” said Lee, who had spent the past months in prison relaying his business decisions through visiting employees. He said he was keeping close attention to the “concerns, criticism and huge expectations” about him and then walked into a black sedan without answering reporters’ questions.

Lee, 53, is the third-generation heir of a business empire that runs everything from technology, construction and financial services companies to hospitals, an amusement park and baseball and soccer clubs. The crown jewel, Samsung Electronics, singlehandedly represents about 20% of South Korea’s entire stock market value and one-fourth of its total exports.

Lee’s parole marked an about-face for the government of President Moon Jae-in, who after being elected in 2017 pledged to curb the excesses of “chaebol,” or South Korea’s family-owned conglomerates, and end their cozy ties with the government. Park Soo-hyun, Moon's spokesperson, said in a statement that Lee's release benefited the “national interest” and pleaded for people's understanding.

"We are well aware that there are supporting and opposing views on Vice Chairman Jay Y. Lee's parole. The views of the people who are opposed are also right," the statement read.

"On the other hand, there have been many people who called for his parole in this severe crisis, hoping that he will help the country with respect to semiconductors and vaccines."

Freeing Lee became politically convenient for Moon after recent polls indicated South Korea’s public – years removed from the angry protests that filled the streets with millions of demonstrators in 2016 and 2017 – largely favored Lee’s release. With the next presidential election coming in March 2022, the ruling liberals are hoping to win votes among the millions of South Koreans who own Samsung shares, some experts say.

Lee served a total of 18 months of a 30-month sentence for embezzling millions of dollars from corporate funds to bribe then-President Park Geun-hye to ensure her government's support for a 2015 merger between two Samsung affiliates that tightened his control over the corporate empire.

His case was part of a massive corruption scandal that triggered nationwide protests and led to the impeachment and ouster of Park, who has been jailed since 2017 and won’t be released until 2039 if she fully serves her term.

Even with his release, Lee isn’t out of the legal woods. He appeared at the Seoul Central District Court on Thursday for another trial over alleged stock price manipulation, auditing violations and other financial crimes related to the 2015 merger. His lawyers have insisted the allegations in that case were not criminal acts but were normal business activities.

In including Lee among some 800 prisoners who were granted paroles ahead of Sunday’s Liberation Day, which celebrates Korea’s independence from Japanese colonial rule at the end of World War II, the Justice Ministry cited unspecified economic concerns related to the pandemic and global markets.

Lee runs the Samsung conglomerate in his capacity as vice chairperson of Samsung Electronics, a major global provider of computer memory chips and smartphones.

Lee was originally sentenced in 2017 to five years in prison on the corruption charges but was freed after 11 months in February 2018 following a Seoul High Court ruling that reduced his term to 2 ½ years and suspended his sentence, overturning key convictions and reducing the amount of his bribes.

The Supreme Court returned the case to the high court in 2019, ruling that the amount of Lee’s bribes had been undervalued. Lee was jailed again in January this year following a retrial.

Almost no one had expected Lee to serve his full sentence through July 2022.

After avoiding the issue for months, Moon signaled a step toward change in May when he told reporters that his government will consider both the intensifying competition in the semiconductor sector and public feelings before deciding whether to grant Lee an early release.

Moon’s office initially distanced itself from Lee’s release, saying paroles are up to the Justice Ministry, before using its statement Friday to address criticism that it revived a tradition of preferential treatment for convicted tycoons.

While Lee has always been in control of Samsung regardless of whether he was in the boardroom or a prison cell, it’s unclear how quickly he could formally resume his management role. He would need the justice minister to officially approve his return to work as the law bans people convicted of major financial crimes from returning to work for five years after their release. He is widely expected to get that approval.

Samsung showed no obvious sign of trouble while Lee was in prison. It has reported robust profit during the coronavirus pandemic, seeing larger demands for its consumer electronics products and chips used in computing devices and servers as the virus forced millions to stay at home.

But there were also views that Lee’s prison term compromised Samsung’s speed in major investments when it needs to spend aggressively to stay competitive in semiconductors and other technologies.

While Samsung remains dominant in memory chips, which are used to store information, it’s apparently falling behind rival Taiwan Semiconductor Manufacturing Co. in the race for high-tech chips designed to perform a broader range of functions.

The demand for advanced chips is expected to grow rapidly in the coming years, driven by 5G wireless services, artificial intelligence and self-driving cars. Some analysts say Samsung will become more active in pursing merger and acquisition deals to gain such technologies as Lee will be able to sign off on investments more easily.