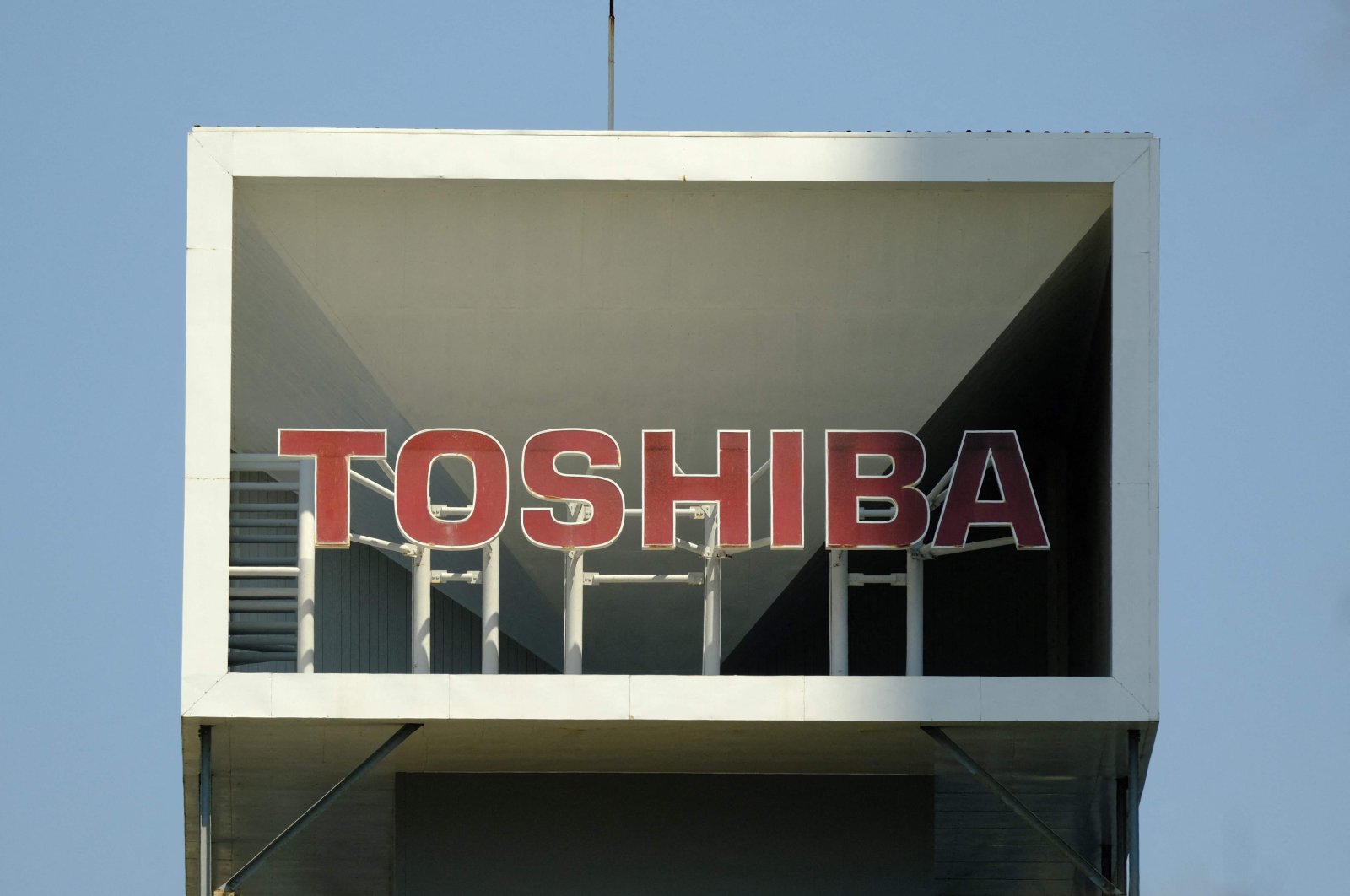 The logo of the Japanese industrial group Toshiba is seen on top of its headquarters in Tokyo, Japan, April 7, 2021. (AFP Photo)
by ASSOCIATED PRESS Apr 07, 2021 4:19 pm
RECOMMENDED

Japan's Toshiba Corporation is considering a preliminary acquisition proposal that would take the technology conglomerate private. Toshiba said Wednesday that it asked for more details on the proposal it received on Tuesday, was giving it "careful consideration” and would make an announcement "in due course.”

CVC is an international private equity and credit company, which has committed nearly $162 billion in funds, managing more than 300 investors. It declined to comment. It's headquartered in Luxembourg, and its main office is in London, according to the company.

Toshiba, founded in 1875, was long revered as one of Japan’s most respected brands, developing the nation’s first radar and microwaves, electric rice cookers and laptop computers. It also invented flash memory, the ubiquitous computer chips that store and retain data for digital cameras, cell phones and other gadgets. Toshiba no longer makes laptops and it has sold its computer chips division. Toshiba’s sprawling businesses, besides nuclear power, include railways, elevators and storage for digital data.

Last month, Toshiba held a general shareholders’ meeting, and approved a proposal from Effissimo Capital Management, a major shareholder, to appoint independent investigators to look into possible interference last year with shareholders’ voting rights. Company management had opposed the proposal. The move by CVC to make Toshiba a private company, if realized, would help quiet dissenting voices from shareholders.

Toshiba President Nobuaki Kurumatani previously served as the head of CVC in Japan before taking his post at Toshiba in 2018. Japanese media quoted him as saying a board meeting will be held, but he did not say when.

Atul Goyal, an analyst with Jefferies, noted the reported offer is at a premium, but launching a tender offer will require regulatory and government approval. "Privatization could be positive as it may provide Toshiba much needed flexibility and cover from limelight," Goyal said, adding, "It is not a done deal.”

In recent years, Toshiba has been dogged by ethical questions and has been mired in scandals. In 2015, Toshiba acknowledged it had been systematically falsifying its books since 2008, as managers tried to meet overly ambitious targets. An outside investigation found it had inflated its profits and hidden massive expenses.

Toshiba invested heavily in nuclear power. But after the March 2011 nuclear disaster in Fukushima, costs of the business ballooned because of growing safety concerns and a souring of sentiment toward nuclear power in countries like Germany. After Toshiba had acquired Westinghouse in 2006 with much fanfare, the United States nuclear unit filed for bankruptcy protection in 2017.

Toshiba is now tasked with decommissioning nuclear plants in Japan, including the one in Fukushima, where critical tsunami damage set off reactor meltdowns. For the nine months through December, Toshiba returned to a profit of 43.6 billion yen ($396 million), a reversal from the 145.6 billion yen loss racked up the previous year over the same period. It reports results for the fiscal year in May.