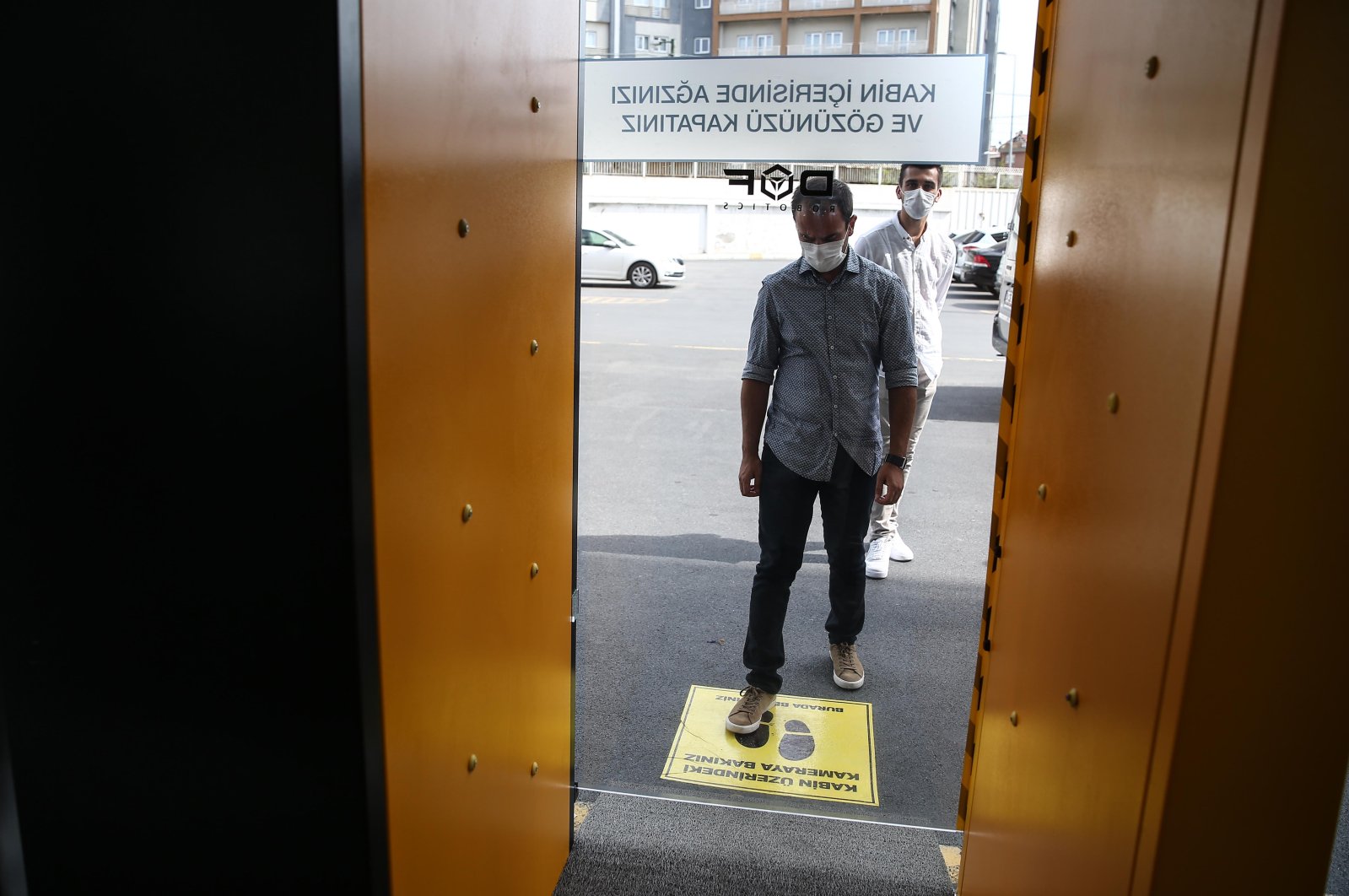 A man is seen in front of a smart disinfection and sanitation cabin developed by DOF Robotics. (AA Photo)
by DAILY SABAH WITH AA Sep 10, 2020 1:16 pm
RECOMMENDED

A smart disinfection and sanitation cabin developed by a Turkish firm and used at many facilities, including airports and shopping malls, is seeing rising international interest.

DOFense has been developed to prevent the spread of infections by disinfecting people’s clothes and shoes within 10 seconds, according to DOF Robotics Chairman Mustafa Mertcan.

The automatic door takes the initial temperature measurement of people entering and is equipped with technology enabling face mask detection. Additionally, it is also capable of preventing access to people with a temperature higher than a predetermined limit.

“It checks whether you have a mask. It also automatically opens the door for you to enter if you have a mask and no high body temperature. Then you go in and it performs the disinfection process,” Mertcan told Anadolu Agency (AA).

He said the cabin provides maximum protection not only against COVID-19 but also against other viruses through its disinfection process. It sprays the disinfectant liquid through the nozzles placed on various spots in the cabin.

The cabins are easy to install and require only two hours to be ready for operation.

Mertcan said the production process has been ongoing for two months. DOF Robotics has so far sent the system to Qatar, the U.S. and several countries in Europe, he added.

“We most recently made an agreement with New York’s John F. Kennedy (JFK) Airport and these devices will also be used at the entrance doors there. We also have our solution in shopping malls and FEC (family entertainment center) playgrounds in Qatar,” he noted.

The company is seeing high demand from around the world, most of which comes from European and Gulf countries and the U.S., the chairman said.

“We have already carried out our shipments to countries such as Qatar, Saudi Arabia and Italy. Our shipments will also go to the United States, Kuwait and Austria,” he added.

The average sales price of the product is $10,000, Mertcan said, stating that they completed the R&D and prototype production of the project in about 45 days.

The company’s platinum model disinfection cabin has an online health condition data monitoring and reporting system, he noted, adding that the device can be integrated into the government’s monitoring applications such as Hayat Eve Sığar (HES).

HES, meaning Life Fits into Home in English, is a mobile application pioneered by Turkey’s Health Ministry that tracks the contraction of the COVID-19 virus and shares maps of health services and risk areas.

The pandemic has initiated a process that will lead to a further increase in security measures in the upcoming period, Mertcan noted.

“Checking whether a person has a fever will continue to be very important in the coming period. We have made our long-term plans for production and sales. We have already reached serious markets, especially in the U.S., Europe, China and the Middle East. Our expectation from now on is to be able to sell in large quantities in these markets,” Mertcan said.