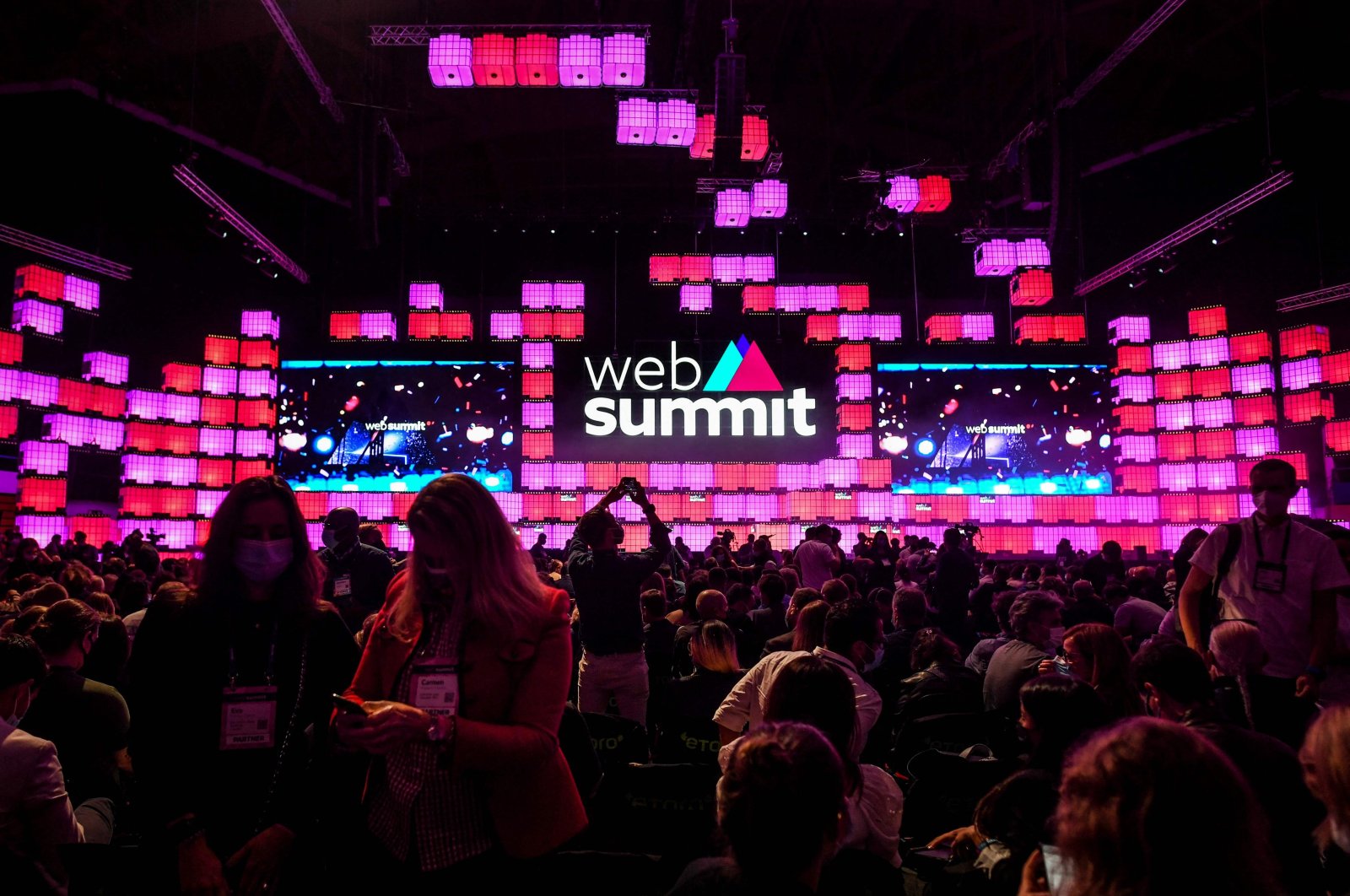 Having held its first in-person event in two years, Europe’s biggest tech conference Web Summit drew over 42,750 attendees from 128 countries, and for the first time in its 10-year history, there were more women than men in attendance

Thousands flocked to the Portuguese capital, Lisbon, this week as Europe’s biggest and one of the world’s best-known technology events held its first in-person conference in two years, after it was held online last year due to the coronavirus pandemic.

In what is said to be the biggest tech gathering since the beginning of the pandemic, the Web Summit, held on Nov. 1-4, welcomed more than 42,750 attendees from 128 countries.

The event also saw a first in its 10-year history: There were more women than men in attendance. Some 50.5% of the attendees this year were women.

This doesn't come as a surprise as the percentage of women participating in the event has been on the rise since 2016 after the launch of the Web Summit’s “Women in Tech” initiative. Female representation has grown from 46.3% in 2019 and 45.8% in 2020, according to organizers.

Figures regarding the conference were shared by its founder and CEO Paddy Cosgrave, who said the attendees used the event’s operating system, Summit Engine software, which was used during the United Nations Development Programme (UNDP) event in March this year.

The Web Summit’s second client for its software will be the world’s largest tech convention, the Consumer Electronics Show (CES), which will use it at its 2022 event in Las Vegas, Cosgrave said.

Cosgrave said that by the opening night, there had already been 500,000 connection requests sent in the Web Summit app.

He had said the event would be the largest entrepreneur gathering in the world this year. This is reinforced by the fact that the conference is said to have seen the participation of 1,519 startups.

Thousands of founders have had a chance to meet with 872 investors to make deals.

Cosgrave had said as many as 70 unicorns were expected to take the stage throughout the course of the event, the Web Summit's highest number ever.

The Web Summit partners range from Fortune 500 companies to startups and exhibitors representing all levels and sectors of the global high-tech industry.

Among the attendees at the event were top executives from giant tech companies such as Amazon Web Services, Meta (previously Facebook) and Apple.

Entrepreneurs from every country

Artificial intelligence (AI), security, blockchain, cryptocurrencies as well as non-fungible tokens (NFTs), one the most popular topics recently, were among the most discussed issues at the Web Summit.

An NFT is a crypto asset, representing an intangible digital item such as an image, video or in-game item. Owners of NFTs are recorded on a blockchain, allowing an NFT to be traded as a stand-in for the digital asset it represents.

The event saw entrepreneurs and investors taking the stage in each hall to discuss different topics, while countries were represented by their entrepreneur booths.

Turkey was represented by the Presidency’s Investment Agency and entrepreneurs, while Germany, Britain, France, Belgium, Qatar, Tunisia, Brazil and Italy were also among the countries that set up booths for their startups.

Most personal device under threat

Among matters also discussed during the Web Summit were app stores and security.

Installing software on a device from places other than the official app stores, including a website or a third-party app store, increases the consumers’ right to choose.

Yet, Apple is against proposed requirements for sideloading apps onto iPhones, claiming that even though it provides a preferential right to consumers, the move threatens security and would make phones the target of malware and cyberattacks.

Apple has noted that malware and security and privacy threats are becoming increasingly common, and that this is mainly happening on platforms that allow users to install applications from outside the official app store.

Apple’s head of software engineering Craig Federighi has tried to convince viewers of the risk posed by other platforms and third-party app stores.

Federighi stressed that mobile devices carry the most personal data out of all our technological devices.

“As an engineer who wants iPhone to stay as secure as possible for our users, there is one part I worry about and that’s the provision that would require iPhone to allow sideloading. In the name of giving users more choice, that one provision would take away consumers’ choice of a more secure platform. All of this comes at a time where people are keeping more personal and sensitive information than ever on their iPhones,” he said.

“And I can tell you there have never been cybercriminals more determined to get your hands on it.”

Among this year’s speakers at the Web Summit was arguably 2021’s biggest name in tech, Facebook whistleblower Frances Haugen.

In her first public address since she leaked a trove of damaging documents about Facebook’s inner workings, Haugen urged her former boss, Mark Zuckerberg, to step down and allow change rather than devoting resources to a rebrand.

“I think it is unlikely the company will change if (Mark Zuckerberg) remains the CEO,” Haugen said.

The former Facebook product manager replied positively to the question of whether Zuckerberg should resign, and added: “Maybe it’s a chance for someone else to take the reins ... Facebook would be stronger with someone who was willing to focus on safety.”

The social network, with nearly 3 billion users, changed its name to Meta last week, in a rebrand that focuses on building the “metaverse,” a shared virtual environment that it has tapped as the successor to the mobile internet.

But early adopters of the virtual worlds known as the metaverse blasted Facebook’s rebranding as an attempt to capitalize on growing buzz over a concept it did not create to deflect from recent negative attention.

Commenting on the rebranding, Haugen said it made no sense given the security issues that have yet to be tackled.

“Over and over Facebook chooses expansion and new areas instead of sticking the landing on what they’ve already done,” she said.

The Web Summit also welcomed top executives from the company. Chris Cox, the chief product officer at Meta, gave the audience a glimpse into the metaverse.

In addition, the event was also joined by Nick Clegg, vice president of global affairs and communications at Meta and former deputy prime minister of the U.K. from 2010 to 2015.

Moved from Dublin to Lisbon

Dubbed one of the largest tech conferences in the world, the Web Summit was founded in 2009 by Cosgrave, Daire Hickey and David Kelly.

It started in Dublin, Ireland, where it was held until 2016, before it moved to Lisbon, where it has continued to grow.

The founders of Web Summit hold events around the world, including the RISE Conference in Hong Kong, Collision in Toronto, SURGE in Bangalore and MoneyConf in Dublin.

The Web Summit gives the Portuguese capital and the country itself much to celebrate, drawing dozens of thousands of tech enthusiasts.

Cosgrave drew attention to the successful vaccination campaign in the host country, which is one of the world’s most vaccinated nations with around 85% of its population fully inoculated.

To enter the summit, people had to have their EU digital COVID-19 certificate or a negative test. All attendees were required to wear masks indoors and outdoors.

Also taking the stage, Lisbon Mayor Carlos Moedas emphasized that they will continue to support the entrepreneurship ecosystem with their focus on innovation and attention to detail.