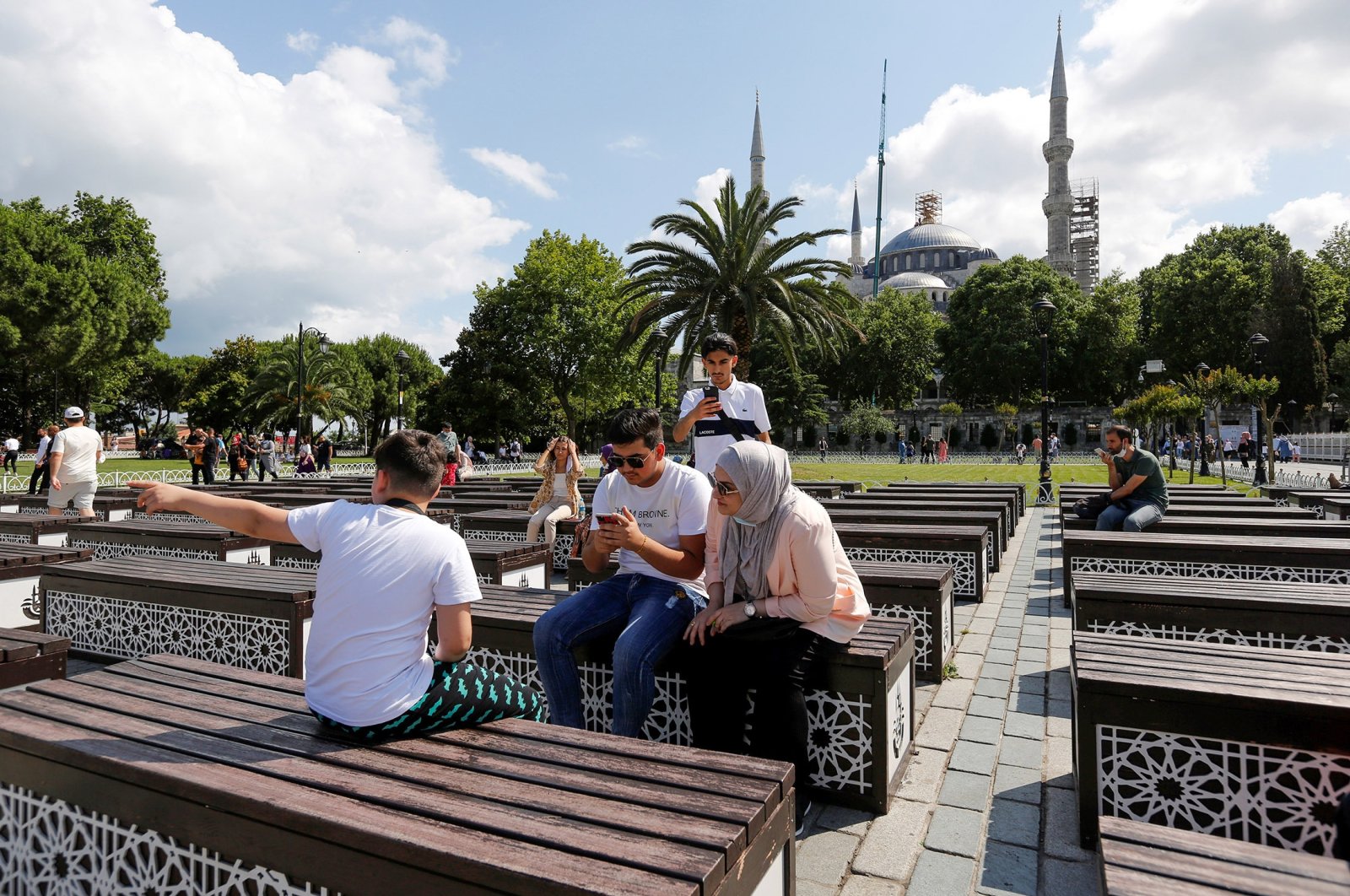 Foreign tourists pause at Sultanahmet Square as they visit the old part of Istanbul, Turkey, July 8, 2021. (Reuters Photo)
by Daily Sabah with Reuters Jul 15, 2021 8:54 am
RECOMMENDED

Arab visitors attracted by quarantine-free travel and affordable prices are helping bolster a rebound for Turkey’s tourism industry, as it looks to plug the gap left by Britons, for whom the country remains off-limits.

Holidaying with his family in Istanbul, Jordanian Omar Zahra, 48, said flying there from Amman was a better choice than Gulf destinations, where a failed COVID-19 test would lead to quarantine, or ones in the European Union, which briefly banned travelers from Jordan.

“You don’t have to go to Europe. It is a lot more expensive ... and they still have some restrictions,” he said this week on a Bosporus strait boat tour as nine Jordanians sipped Turkish coffee and snapped pictures of Ottoman-era palaces.

His sister Muna Abuzahra asked the tour guide whether they would sail near the Abud Efendi Mansion on the waterfront, where the Turkish TV series “Noor” – one of the most popular shows in Arab nations – is filmed.

“This is the best place to go for price, culture, nature, food and weather,” Zahra added.

Turkey’s tourism sector accounts for up to 12% of the economy and is a key source of foreign revenue to offset big trade imbalances.

Officials expect this year's profit margins will return closer to pre-pandemic levels, despite the surge of COVID-19 cases that prompted a partial lockdown in May.

The figure was still a fraction of the 4 million who came in 2019 before the pandemic hit.

In the first week of July, airport passenger numbers were at their highest since the pandemic struck, according to the State Airports Authority.

But the absence of Britons, for whom it remains a red list destination restricted for all but essential travel, in part meant Turkey’s international air traffic was still down 52% in June compared to June 2019.

Qataris and Kuwaitis too

“We see a huge demand and high-budget reservations from Jordan ... For now, it seems to be our top market in the region,” said Serdar Ali Abet, chair of Karnak Travel, which mainly specializes in Gulf and Middle East markets.

With holiday traffic from Qatar and the Palestinian territories also on the rise, he estimated Arab holidaymakers would reach 50% of pre-pandemic levels this year, held back in part by political friction with Saudi Arabia and the United Arab Emirates (UAE) and by Lebanon’s economic crisis.

Jordanian Abuzahra had returned after vacationing in the Mediterranean resort city of Antalya a few years ago.

“We heard about Istanbul so much,” she said. “If you want to go to (Jordan’s) Bethany, the Dead Sea or Aqaba, you will spend much more than here. It is a good choice and a good price.”