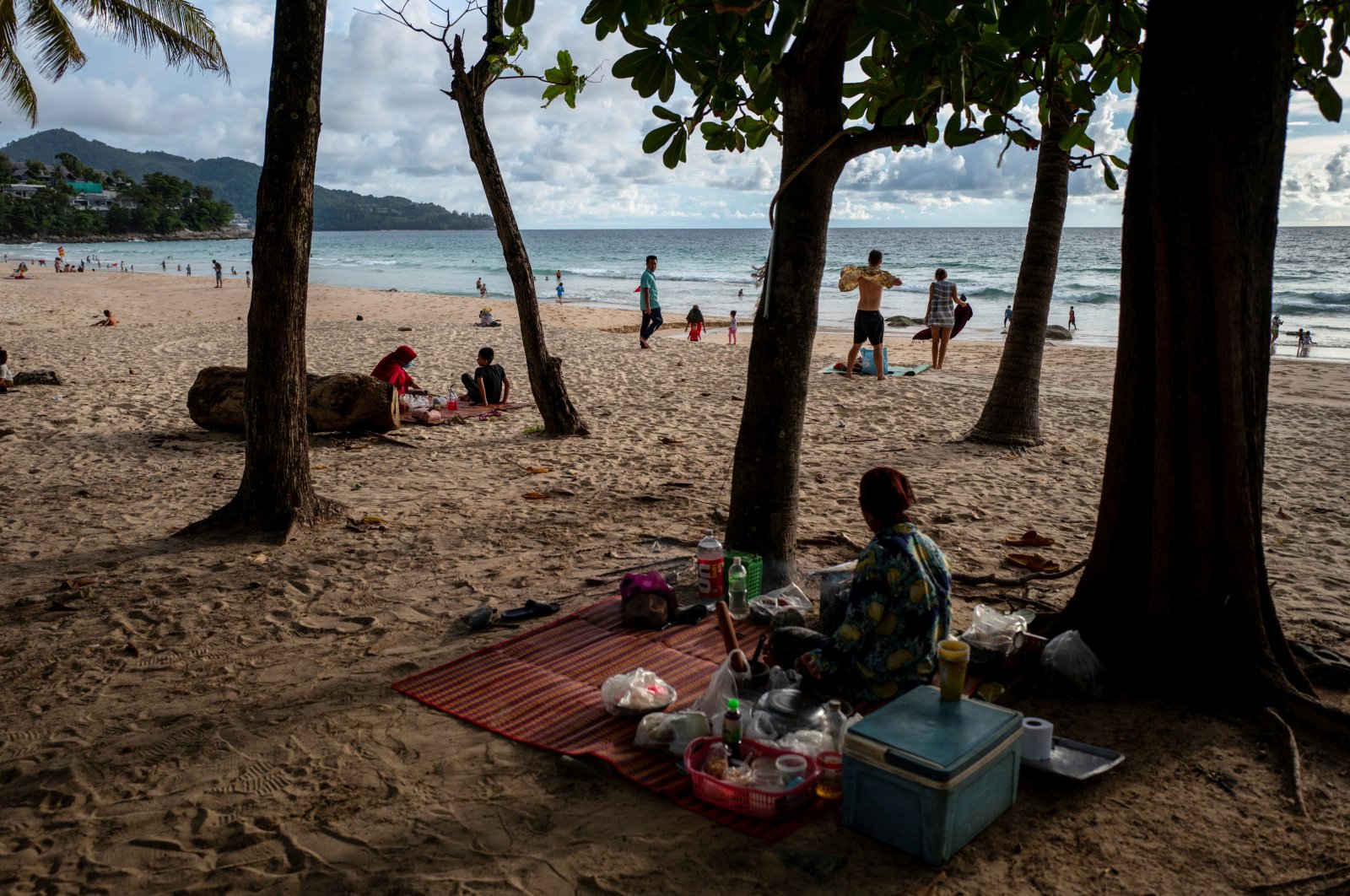 People enjoy the beach as Phuket opens for foreigners, who are fully vaccinated against the coronavirus, to visit the resort island without quarantine, in Phuket, Thailand, Sept. 19, 2021. (Reuters Photo)
by REUTERS Nov 04, 2021 10:29 am
RECOMMENDED

Asia's gradual easing of international travel curbs is proving a welcome relief for the region's hard-hit tourism operators slowly opening up to visitors from around the world – with one giant exception.

China, previously the world's largest outbound tourism market, is keeping international air capacity at just 2% of pre-pandemic levels and has yet to relax tight travel restrictions as it sticks to zero tolerance for COVID-19.

That has left a $255 billion annual spending hole in the global tourism market for operators such as Thailand's Laguna Phuket to try and fill.

Managing director Ravi Chandran says Laguna Phuket's five resorts have shifted their marketing focus to Europe, the United States and United Arab Emirates (UAE) to make up for the loss of Chinese visitors, who accounted for 25%-30% of its pre-COVID-19 business.

"Up to today, we have not done significant marketing or promotion in China... because we don't feel anything coming our way," Chandran said.

The pandemic has cost Thailand an estimated $50 billion a year in tourism revenue, as the Chinese were above-average spenders based on tourism ministry data.

Thailand hopes to receive 180,000 foreign tourists this year, a fraction of around 40 million it received in 2019, as it opened places beyond Phuket to tourists on Monday.

Many experts expect China to keep stringent measures, such as an up to a three-week quarantine for those returning home, until at least the second quarter of next year and possibly then open gradually on a country-by-country basis.

"Destinations have to identify new source markets and learn how to market and cater to different cultures," Pacific Asia Travel Association (PATA) Chief Executive Liz Ortiguera said, citing the Maldives as a rare example of a successful pivot during the pandemic.

The string of islands in the Indian Ocean promoted itself heavily at trade shows and attracted more Russian and Indian visitors to its luxury resorts and sparkling waters.

China had been its greatest source of tourists before the pandemic, but the Maldives saw overall arrivals in the first nine months of 2021 fall just 12% versus the same period in 2019.

"When we realized that Chinese travelers weren't coming to the Maldives any time soon, we switched our focus to other key markets including Russia," said a spokesperson for COMO Hotels and Resorts, which has two Maldives resorts.

Travel data firm ForwardKeys estimates it will take until 2025 for Chinese outbound travel to recover to pre-pandemic levels. That will also force airlines to re-evaluate their routes given that its data shows 38% of Chinese tourists took foreign carriers in 2019.

Even as Singapore, Thailand and Indonesia's Bali gradually open up for international travelers, Thai Airways and Garuda Indonesia are drastically shrinking their fleets as part of restructuring plans amid the absence of Chinese tourists.

When China does open its borders, industry surveys show a reluctance by many to travel internationally due to COVID-19 fears.

There has also been a boom in domestic holidays to Hainan Island which now offers duty-free shopping in a threat to future visits to nearby destinations such as Hong Kong and South Korea.

"I honestly do not have much enthusiasm for international travel," said Kat Qi, 29, a researcher in Beijing who traveled to Southeast Asia and Britain before the pandemic. "A lot of places that I wanted to visit are in less developed countries with gorgeous natural scenery and they tend to be the least vaccinated countries."

Her preference for natural scenery is also a trend emerging in surveys of Chinese travelers. Many are focused on the outdoors at a time when domestic camping holidays have become popular. Tourism operators will need to adapt accordingly, experts say.

"The market will have changed so the Chinese people traveling in 2022 will be different from the Chinese traveling in 2019," said Wolfgang Georg Arlt, CEO of the China Outbound Tourism Research Institute. "I think the trends will go away from this shopping and rushing around."

Large group tours that have also fallen out of favor on domestic trips could also be a thing of the past, to be replaced by independent travel and smaller customized tours with family and friends, said Sienna Parulis-Cook, director of marketing and communications at advisory firm Dragon Tail International.

"You might have organized travel and everything but it would be with a small group of people that you know, rather than 50 strangers on a tour bus," she said.