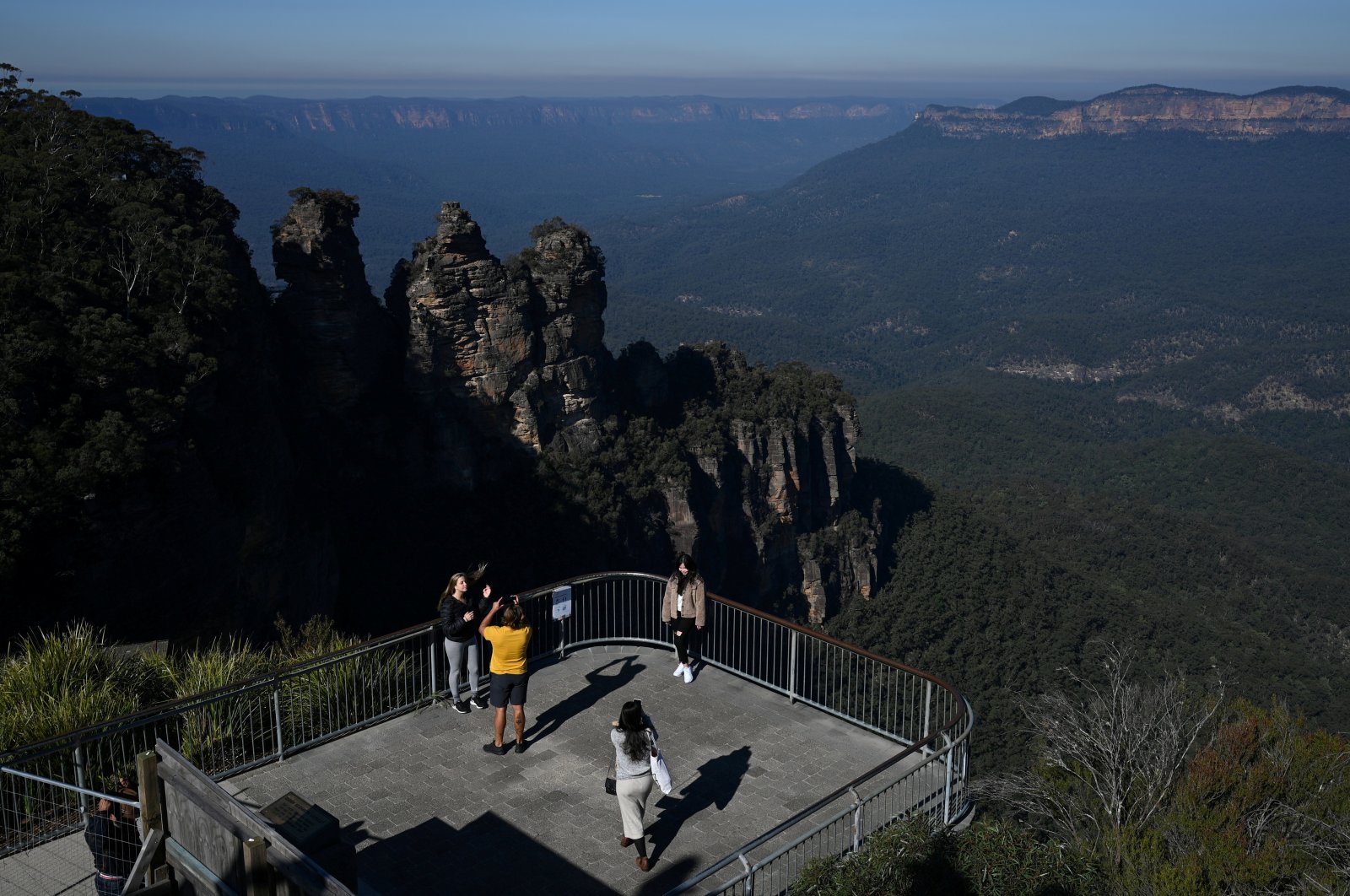 Tourists pose for photos at the Three Sisters rock formation in the Blue Mountains National Park in the wake of regional travel reopening as COVID-19 restrictions are eased, New South Wales, Katoomba, Australia, June 5, 2020. (Reuters)
by REUTERS Mar 11, 2021 11:58 am
RECOMMENDED

Australia aims to boost local travel while international routes remain closed because of the COVID-19 pandemic. In line with the goal, the government unveiled an AU$1.2 billion ($928 million) tourism support package Thursday.

The basket of airline ticket subsidies for travelers, cheap loans to small tour companies and financial aid for the country's two largest airlines is designed to keep the critical sector ticking until foreign tourists return.

"This package will take more tourists to our hotels and cafes, taking tours and exploring our backyard," Australian Prime Minister Scott Morrison told reporters in Sydney.

"That means more jobs and investment for the tourism and aviation sectors as Australia heads toward winning our fight against COVID-19 and the restrictions that have hurt so many businesses."

Tourism is a major growth driver for the Australian economy, generating AU$60.8 billion in gross domestic product (GDP) in 2018-19 and employing around 5% of the country's workforce.

The sector was hard hit when Australia closed its international borders – with a few exceptions for returning nationals and some others – a year ago to prevent the spread of COVID-19. A series of internal state and territory border closures sparked by COVID-19 outbreaks also exacerbated the downturn.

The country's two major airlines, Qantas Airways Ltd. and Virgin Australia, slashed flights and put planes into hibernation while thousands of people across the industry became reliant on a federal government wage subsidy program, which expires this month.

"This program allows those people to stay connected with Qantas so we don't lose them ... because when the borders open up, we need the capability to start as many flights as possible," Qantas Chief Executive Alan Joyce said.

Qantas hopes to resume some international flights by the end of October, when Australia expects to complete its national COVID-19 immunization drive. Morrison said it was "too early" to confirm a projected date for the international border to reopen.

The 50% subsidies on some 800,000 plane tickets will be focused on destinations that usually rely heavily on foreign tourists, including Alice Springs and Kangaroo Island, and will be available from April 1 until the end of July.

Shares of travel-related stocks led gains on the Australian sharemarket, with travel agents Flight Centre Ltd. up more than 10% and Webjet Ltd. up more than 3% to trade near one-year intraday highs. Qantas was up 2% in early afternoon trading.

However, not all industry groups were happy with the support package, which also includes cheap 10-year loans for small tourism companies, many of which are struggling under mounting debt.

"This narrowly targeted package is disenfranchising for many hard-working operators in the tourism industry whose plight is being ignored," said John Hart, executive chair of the tourism division of the Australian Chamber of Commerce and Industry.

"The package also fails to acknowledge that up until the COVID-19 pandemic, the tourism industry was poised for enormous growth."