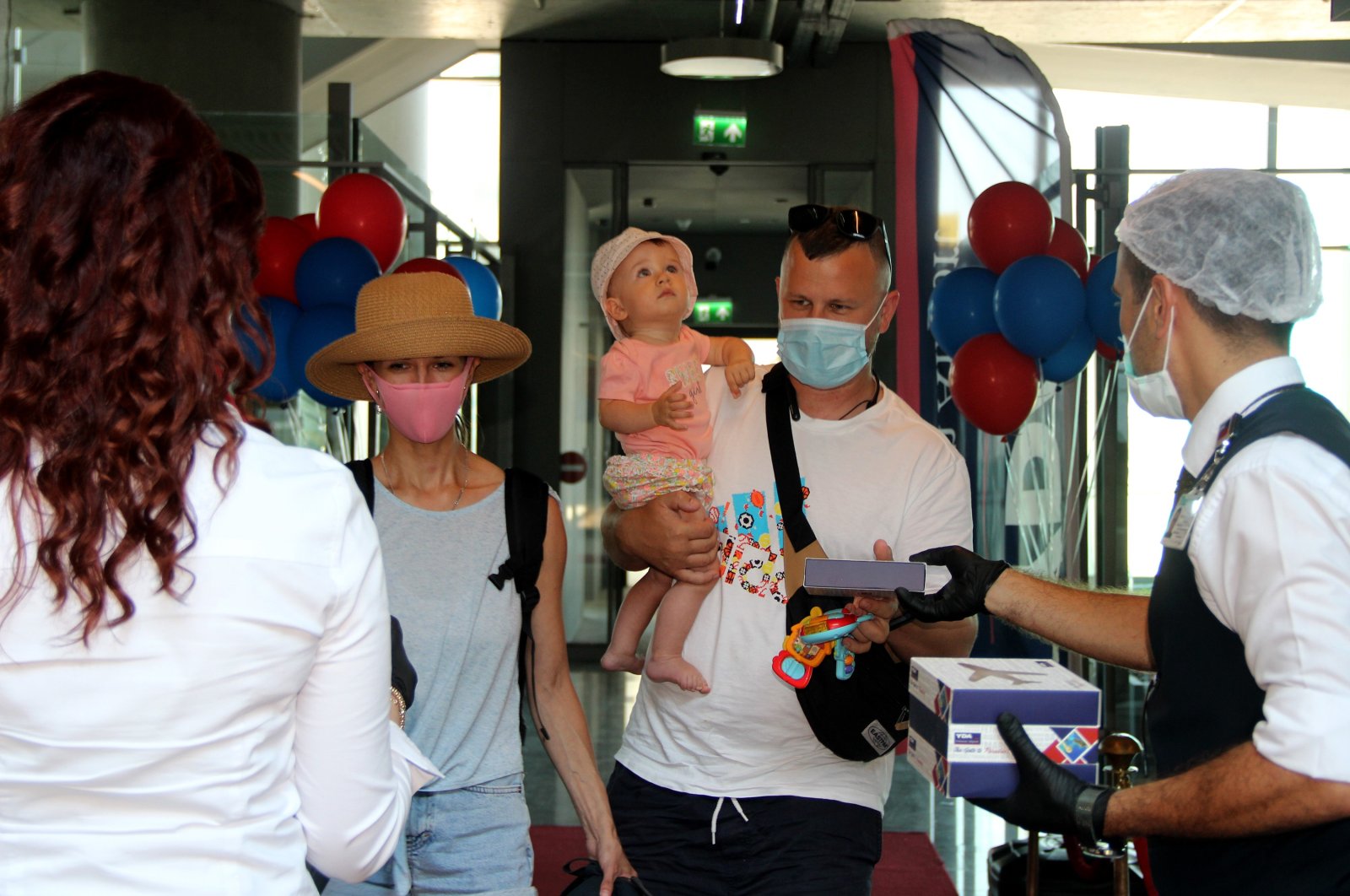 Holiday destinations along Turkey's Mediterranean and Aegean coastlines have once again started to attract tourists after a short break due to the coronavirus pandemic and an increasing number of the vacationers in the coming days are expected to come from the U.K.

The first of dozens of planned British charter flights will arrive in Turkey on July 15 and local sector representatives expect over 500,000 tourists from the U.K. this year.

Following London’s removal of Turkey from their travel-restricted countries list, 76 flights were planned between July 15 and July 31 via British airline company Jet2.com and package tour operator Jet2holidays. British Airways is also resuming its flights to Turkey as of July 16. EasyJet and TUI, meanwhile, will launch their first flights to Turkey on Aug 1.

The industry recently recorded a significant increase in the number of tourists in the southern and western coasts. Antalya on the Mediterranean welcomed over 21,000 tourists in June, a figure that jumped to 27,000 in the first week of July alone. While Ukrainians made up that majority, British guests are expected to push those statistics ever higher with the new scheduled flights.

Airlines from various countries, including Ukraine, Switzerland, Kazakhstan and Norway, have also increased their scheduled flights to Turkey, especially those to the resort city of Antalya.

London has also lifted its 14-day quarantine rule for those returning from Turkey, a decision expected to have a positive impact on the revival of the sector.

Referring to the planned 76 flights in 15 days, Uysal said this number of flights is normally conducted in a week, however, in such extraordinary pandemic times, “we find this to be a very hopeful figure,” Uysal said.

The planned flights will use aircraft with a capacity of up to 300 passengers.

"If the first group coming for a holiday see that the rules are applied at the highest level at the airports and the facilities ... we may see that the demand can increase further," Uysal said, noting that perhaps "we can even have a very good autumn period."

Hilton Dalaman CEO Tunç Batum said that the region has been welcoming a large number of tourists from the U.K., noting that the hotel occupancy rate in the area is now around 15%, but it will jump up to 55% with the coming British wave.

These travelers will provide approximately 10% of the hotel occupancy rates in the Mediterranean and the Aegean, he said, adding that the real impact will be reflected in the August figures.

"We specifically noticed an increase in the number of Ukrainian flights. We expect Turkey to be removed from Germany’s travel restriction list as well," he said, noting that despite the decision, planes are scheduled to come from Germany every day.

"We expect good returns from Europe, albeit slowly," he added.

Turkey Hoteliers Federation (TÜROFED) Chairperson Sururi Çorabatır said the move by the U.K. is set to affect the European Union’s decision as well, stressing that they expect the bloc to lift the ban on Turkey next week.

Professional Hoteliers' Association (POYD) Chairperson Ülkay Atmaca, meanwhile, noted that on July 5 alone, tourists came to Antalya from 36 cities and nine countries with charter planes, saying, "Tourism mobility, which started with the Ukrainian market, is expected to continue with vacationers from different countries when their flight bans are lifted."

During the first week of July, more than 10,000 Ukrainian tourists came to Turkey, he added.

"This year, not everyone has the motivation to go on vacation. There are reasons such as health and economics. We have received reservation requests extensively for 2021 ... As of Aug. 1, we are starting our flights as Easyjet. Capacities are adjusted according to demand. There will be flights to four important airports, Izmir, Antalya, Bodrum and Dalaman," Tonbul said.

Engin Sertoğlu, the chairperson of the U.K. Turkish Travel Agencies Association and a partner of Caria Holidays, has also said that there is growing interest from British tourists for holiday in Turkey.

Saying that the season will be extended to the end of November, Sertoğlu noted that they expect over 500,000 Britsh tourists by the end of this year and that number will increase even more in 2021, according to indicators.