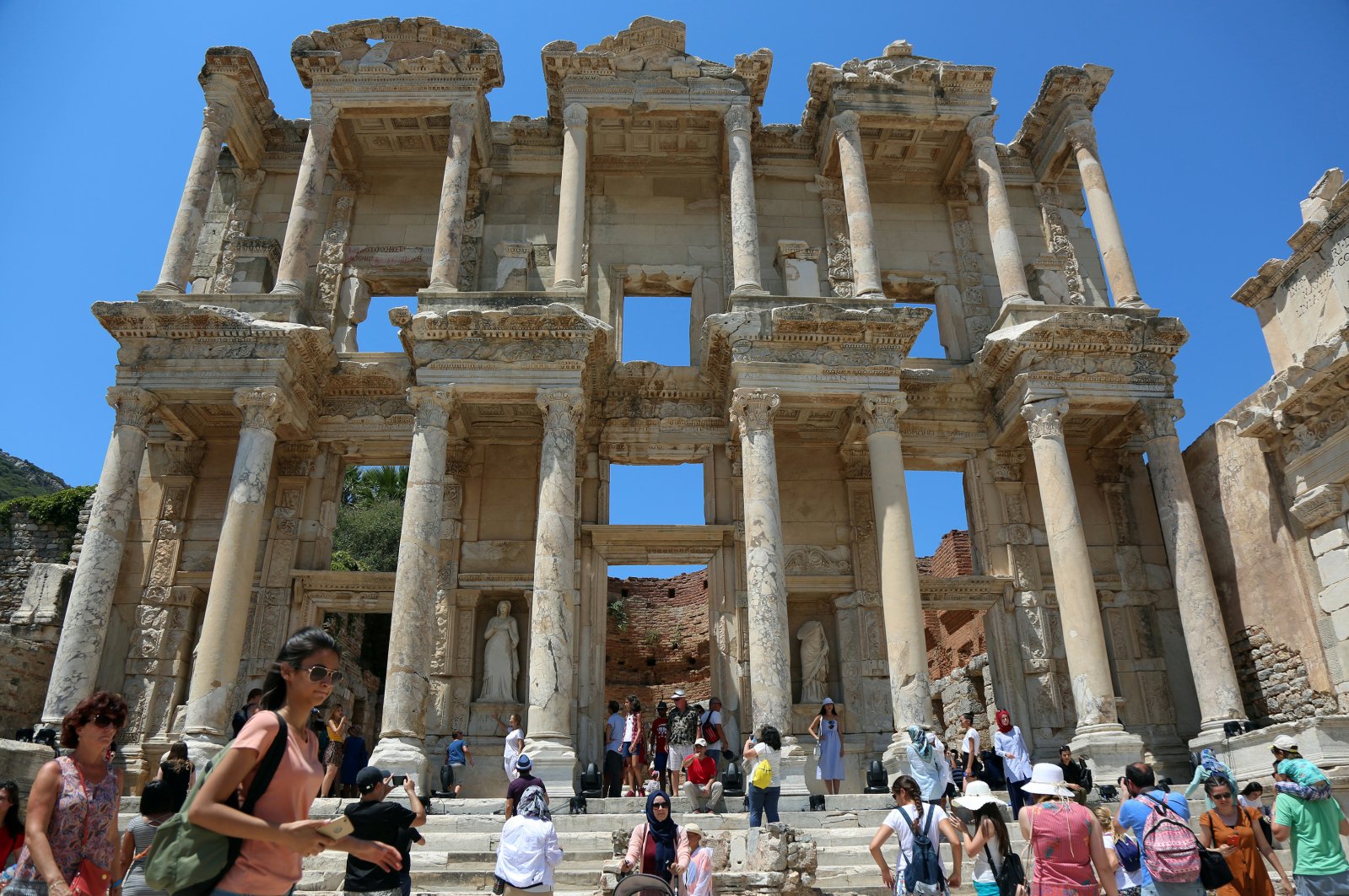 Tourists visit the Celsius Library in the ancient city of Ephesus near İzmir in the western Aegean region, Turkey, Aug. 5, 2018. (Reuters Photo)
by DAILY SABAH WITH AA May 27, 2020 2:55 pm

A large portion of early bookings by foreign tourists during the coronavirus pandemic has not been canceled but rather delayed, which shows travelers haven't given up on Turkey, tourism representatives say.

The COVID-19 crisis has frozen international tourism with the widespread introduction of travel restrictions and the closure of airports and national borders, bringing one of Turkey's key economic sectors grinding to a halt.

The country is now looking to bring back tourists by gradually restarting flights and issuing certificates for businesses that have taken necessary steps against the coronavirus.

The initial test from the end of this month will be the resumption of domestic tourism, with an eye on foreign visitors in the coming period.

Hotels in Turkey's Mediterranean resort city of Antalya are said to be nearing the end of their preparations for the tourism season in accordance with the notice on mandatory measures issued by the Culture and Tourism Ministry. They have been designing their facilities, including buffets, beaches, lobbies and pools, to ensure social distancing.

The "healthy tourism certificate" program aims to convince travelers that despite the pandemic, Turkey’s beaches and historic treasures will be safe to visit this year, with rigorous checks on airlines, local transport and hotels.

The new certificates set criteria for health and hygiene in airlines, airports and other transportation hubs, as well as hotels, restaurants, bars and cafes. They will be awarded by international institutions and information will be sent to tour operators and will be accessible to tourists.

Culture and Tourism Minister Mehmet Nuri Ersoy recently said COVID-19 testing centers were being set up at airports. Passengers in terminals will be required to wear masks and temperatures will be taken with forehead thermometers.

Although tourism activities have paused across the globe during the pandemic, many people from different countries have been consistently calling about vacations in Turkey, Professional Hoteliers' Association (POYD) Chairman Ülkay Atmaca said.

Many foreigners love to come to Turkey for vacation, and they have made a habit of it, Atmaca told Anadolu Agency (AA) Wednesday.

"Reservations for the summer are usually made for later dates. A small proportion of early bookings that have their dates approaching were canceled; dates were mostly postponed," he noted.

"The fact that pre-made bookings were not canceled during the pandemic but moved to a later date shows that tourists did not give up on Turkey," Atmaca said.

He added that the owner of a tour company said that only a small proportion of the 800,000 early bookings they received were canceled. "This is very important to the industry," Atmaca said.

Turkey ranks sixth globally in tourist arrivals and the sector accounts for around 12% of the nation's economy. The number of foreigners visiting the country plunged 51% on an annual basis to 4.3 million from January to April this year, according to Culture and Tourism Ministry data, down from 8.7 million in the same period last year.

Indicating that bookings continue, Yağcı noted that flights should start as soon as possible.

"Reservation sales are open. Foreign guests looking to make reservations from abroad can make their transactions through the relevant tour operators," Yağcı added.

Atmaca noted that the industry has made preparations within the scope of criteria announced by the ministry.

"It is not obligatory to get the health tourism certificate, but only those hotels that have the certificate will be able to open their spa centers," he said.

"One of the most important issues in the new era is personnel. We have been applying the majority of the articles described in the notice for years, but we were not recording it. All will be recorded in the new period," he added.

Atmaca stressed the importance of staff keeping their own social distance as much as customers, adding that the certification program would enable the sector to move foward faster.