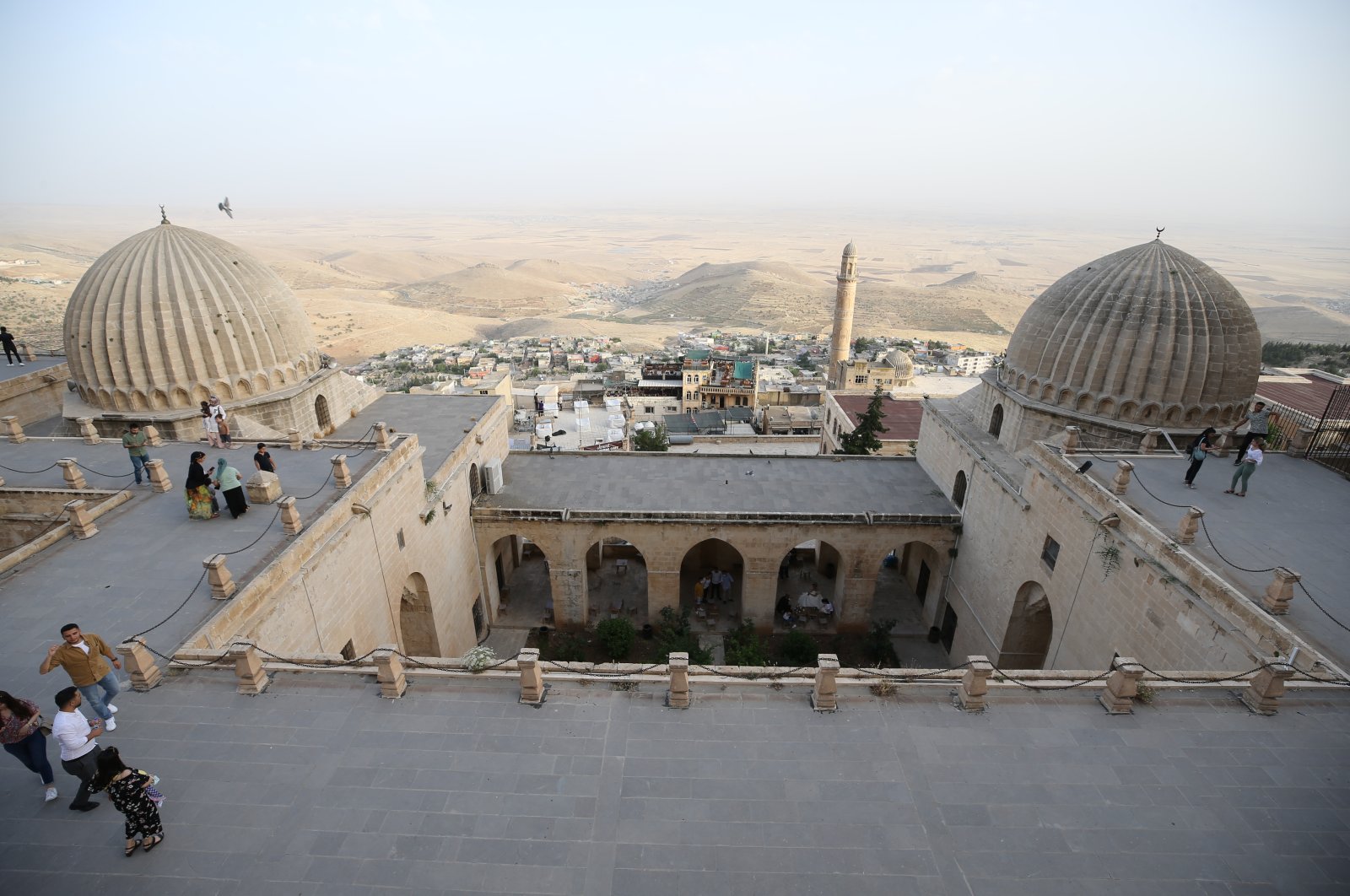 People are seen in the southeastern province of Mardin, home to many civilizations throughout history, Turkey, July 3, 2021. (AA Photo)
by Anadolu Agency Jul 04, 2021 1:08 pm
RECOMMENDED

As part of the tourism-oriented promotion and branding project within the Southeastern Anatolia Project (GAP) Region, which was launched to put the rich cultural heritage of Adiyaman, Batman, Diyarbakır, Gaziantep, Kilis, Mardin, Siirt, Şanlıurfa and Şırnak on the radar of tourists and to ensure regional development, the region will gain a global tourism identity through the brand.

"Mesopotamia" will bring the tourism circulation in the region under one roof.

The brand provides domestic and foreign visitors a mobile travel guide that will include maps, dining, accommodation and city routes.

Foreign tourists who want to travel the southeastern provinces with their ever-increasing historical and cultural values will be able to visit all of the cities that host beautiful places with their unique history, culture, gastronomy and nature, planned and programmed in a period ranging from three to nine days.

Göbeklitepe, Mount Nemrut, Diyarbakır Castle and Hevsel Gardens, Gaziantep with its unique tastes, Mardin with its churches and monasteries, Halfeti with natural beauties, Hasankeyf, Botan Valley and Mount Cudi stand out as historical and tourist attractions in the region.

Tourists have shown interest, especially in cultural routes in the region, said Müslüm Çoban, chairman of the Supervisory Board of the Turkish Tourist Guides Association and President of the Şanlıurfa Regional Chamber of Tourist Guides.

"The whole world knows the region as Mesopotamia. It was a very nice launch and promotion. We believe that we will receive the benefits and returns of this in a positive way in a short time," Çoban told Anadolu Agency (AA).

He added that with the coronavirus pandemic slowly ending, the attention to the region and the brand would increase.

Mehmet Kamil Türkmen, a member of the Mesopotamian Tourism Platform, said the region was previously referred to by GAP tours, but the name is especially difficult for foreign tourists to recognize.

He emphasized that "Mesopotamia" is a concept that expresses the historical and cultural past very well.

"Mesopotamia is a world brand. The region is already called Al Jazeera in Islamic civilization and Mesopotamia in Greek culture," said Türkmen. "Tourists living abroad can perceive this region when it is called Mesopotamia."

"If our guests from abroad want to visit the entire region, they travel in nine days. If their time is very limited, they travel in the main provinces of the region and they are subject to four-day travel plan programs," he said. "We look forward to welcoming all our tourists. Let them come to Mesopotamia, and we will travel through history together."

Soner Bacaksız, a member of the Board of Directors of the Association of Turkish Travel Agencies (TÜRSAB), said the new brand created a new expectation for the region's tourism.

"The brand 'Mesopotamia' contributes to the growth of interest and demand in the region in the coming days. We are talking about a very large destination that completely covers the southern line with the tour route starting from Gaziantep," he said.

He also emphasized that the brand will allow tourists to visit the entire region with one plan.

Mehmet Akyıl, chairman of the executive board of TÜRSAB Diyarbakir region, believes the brand will help the region's name to be well-known around the world.

Akyıl, who said GAP tours were previously limited to Gaziantep, Sanliurfa and Mardin, expressed that the new brand is much more inclusive with nine provinces.