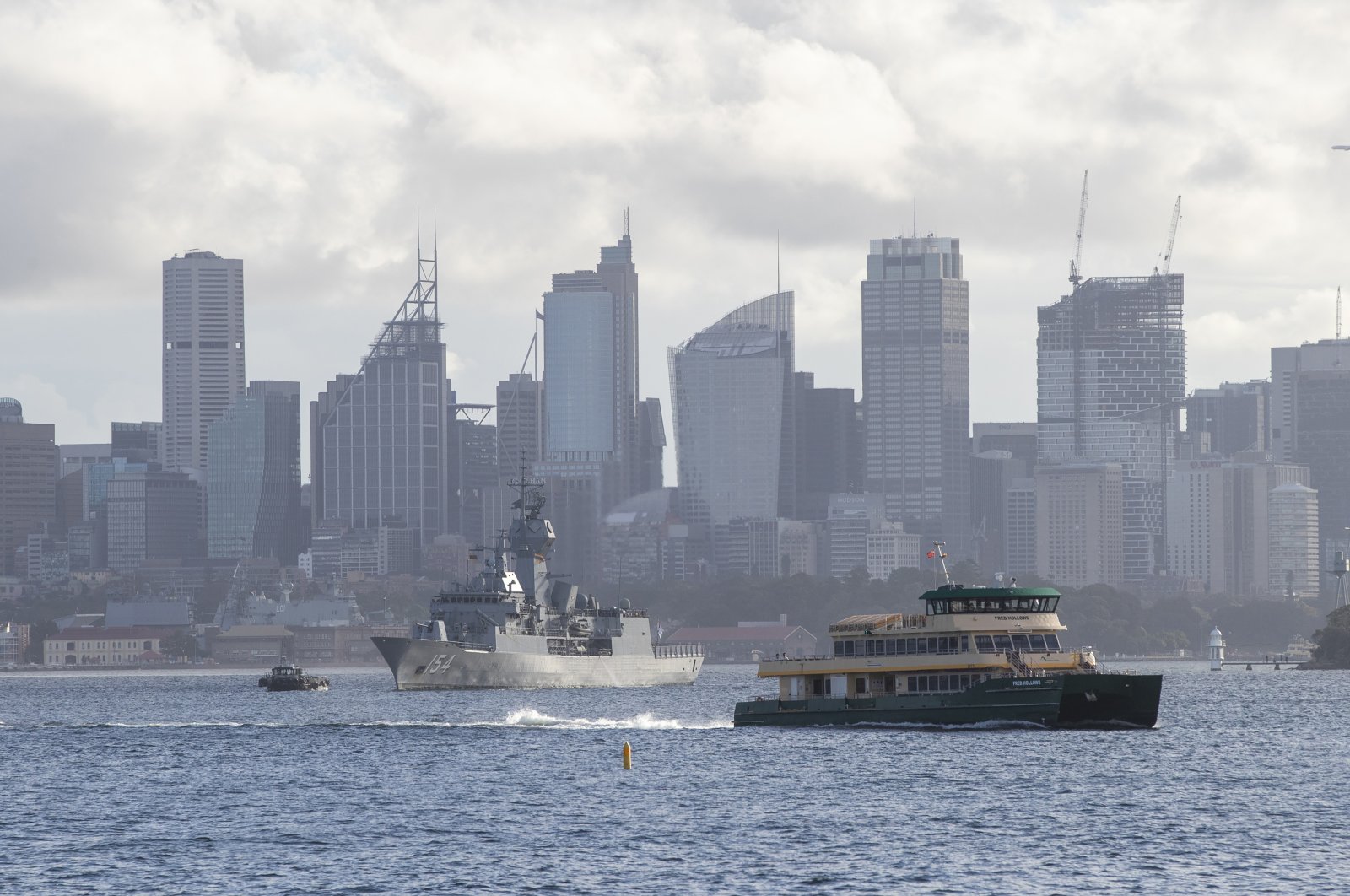 A ferry sails across the Sydney harbor past the HMAS Arunta, an Anzac-class frigate of the Royal Australian Navy, moored in Sydney, Australia, April 6, 2021.
by Agencies Apr 06, 2021 1:44 pm
RECOMMENDED

New Zealand on Tuesday announced it would open the long-awaited travel bubble with Australia that will allow a two-way, quarantine-free travel corridor starting on April 19, allowing families to reunite and giving a big boost to the struggling tourism industry.

The move to allow cross-border travel without mandatory COVID-19 testing is one of the first such agreements since the pandemic prompted countries to block foreign arrivals to stop the virus from spreading.

The start of quarantine-free travel will come as a relief to families who have been separated by the pandemic, as well as to struggling tourist operators.

New Zealand Prime Minister Jacinda Ardern said health officials believe the risk of the virus being transmitted from Australia is low and that travel is now safe.

“The bubble will give our economic recovery a boost and represents a world-leading arrangement of safely opening up international travel while continuing to pursue a strategy of elimination and keeping the virus out,” Ardern told reporters in the New Zealand capital Wellington.

“The Trans-Tasman travel bubble represents a start of a new chapter in our (COVID-19) response and recovery, one that people have worked so hard at,” she said.

Australian Prime Minister Scott Morrison called the agreement “the first of many more steps to come ... as we get back to a more normal position, not only over the course of this year but beyond.”

The virus has effectively been eradicated in both countries, with minor outbreaks the result of leakage from quarantined returned travelers. Australia has recorded about 29,400 virus cases and 909 deaths since the pandemic began, while New Zealand has had just over 2,100 confirmed cases and 26 deaths.

About 568,000 New Zealand-born people live in Australia, according to 2018 figures, equivalent to 2.3% of Australia’s population and Australia’s fourth-largest migrant community.

Australians made up 1.5 million, or 40%, of arrivals to New Zealand in 2019, the year before the pandemic shut borders, contributing $2.7 billion New Zealand dollars ($1.9 billion) to its economy, according to New Zealand figures. Arrivals were forecast to reach 80% of that level by early 2022, Ardern said.

Jim Boult, the mayor of New Zealand’s Queenstown, called the move a “savior for businesses.”

“This is the lifeline we needed; this is what we’ve been asking for,” he was cited as saying by The Associated Press (AP).

Flights to and from some Australian states could still be suspended if there are local outbreaks, Ardern warned. She added that travelers must wear masks on flights and undertake New Zealand contact tracing, while the travel bubble did not apply to people transiting via Australia from other countries.

The bubble would operate under a “flyer beware” system, with no new support from the New Zealand government for people stuck in Australia by cancelations at short notice, Ardern said.

Air New Zealand and Qantas Airways said they would ramp up flights between Australia and New Zealand to more than 70% of pre-pandemic levels, reducing the airlines' cash burn when they are almost wholly reliant on domestic markets for revenue.

A spokesperson for Qantas said tickets to New Zealand were “selling like hot cakes” with a strong “load” to Queenstown, which is billed as the country’s “adventure capital.”

The bubble offered an upbeat development for Australia’s Morrison who faces criticism domestically after falling short of plans to have one-sixth of the population vaccinated by the end of March. The government has blamed the shipping delays on export curbs by the European Union.

The bloc has blocked shipments of 3.1 million doses of AstraZeneca’s COVID-19 vaccine to Australia and the country has little hope of getting the remaining 400,000 doses it has been pledged on time, a government source told Reuters Tuesday.

The export curb underscores massive shortfalls of the AstraZeneca shot across the EU bloc and complicates Australia’s inoculation campaign, which is already 83% behind its original schedule.

“They've blocked 3.1 million shots so far,” said the Australian government source, adding that it had only received 300,000 doses and a further 400,000 doses were scheduled to arrive by the end of April.

“We haven’t given up hope but we’ve stopped counting them in our expected supplies,” the source said.

Australia had until Tuesday only confirmed the block of 250,000 doses of the AstraZeneca vaccine from the EU, which Canberra said then would not delay its inoculation timetable.

Morrison said on Tuesday the missing shipments were responsible for it not meeting its inoculation schedule.

“In early January, we anticipated we would have the 3.1 million vaccines. Those vaccines were not supplied to Australia,” Morrison told reporters. “That is the reason.”