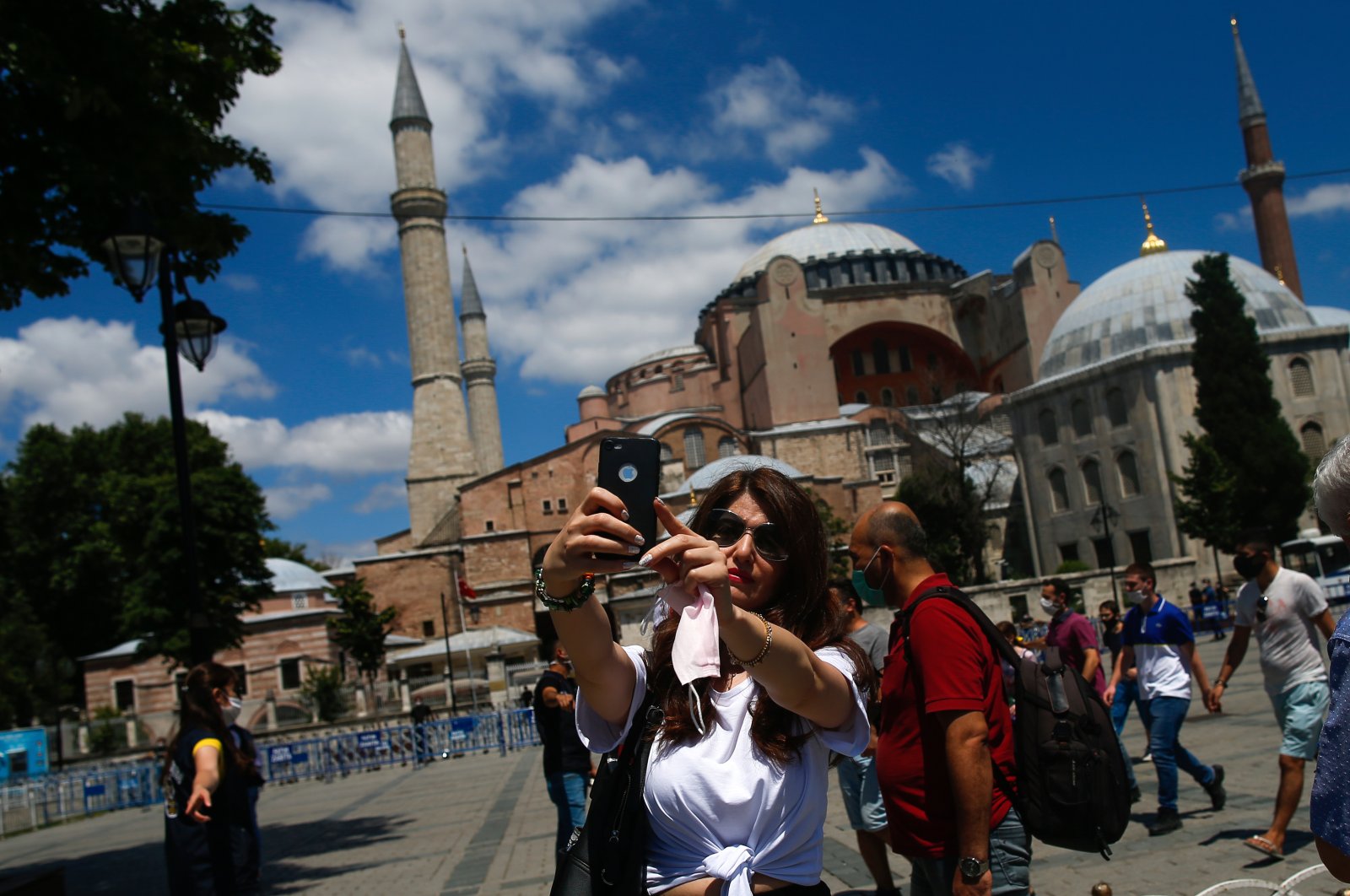 A woman uses her mobile to take a selfie outside the now closed Byzantine-era Hagia Sophia, one of Istanbul's main tourist attractions in the historic Sultanahmet district of Istanbul, July 11, 2020. (AP Photo)
by DAILY SABAH WITH AA Jul 17, 2020 6:22 pm
RECOMMENDED

The reversion of Hagia Sophia into a mosque is Turkey’s internal matter, the Kremlin’s spokesman Dmitry Peskov said Friday, adding that Moscow believes the decision will benefit tourists.

"We have an official position of the state, which is that this is Turkey’s internal affair," Peskov said in an interview to local broadcaster Avtoradio.

Last week, a top Turkish court annulled a 1934 Cabinet decree, under which Hagia Sophia was turned into a museum the following year, paving the way for its use again as a mosque after 85 years.

"Our Turkish partners explained that everything will be preserved in the best possible way, and everyone will be able to visit Hagia Sophia. Moreover, I will tell you, there were quite expensive tickets to Hagia Sophia,” he said.

"And now there will be no tickets, the entrance will be free. In this regard, our tourists will benefit.”

Peskov said the Russian government respects the position of the Patriarch of Moscow and all of Russia on the matter, which is different from the state’s position.

The Kremlin spokesman said he does not expect the Hagia Sophia issue to affect ties between Russia and Turkey.

He praised the relationship between Russian President Vladimir Putin and his Turkish counterpart Recep Tayyip Erdoğan, saying the two leaders share a similar style of working.

He said such an approach was key to finding solutions to difficult problems, "as it was in the Syrian issues and in other situations.”

The Hagia Sophia mosque will be open to prayers on July 24. The preparations for the big day have already begun with the removal of the museum signboards and ticket sales office. Before opening for prayers, the structure witnessed a massive flow of both Turkish and foreign visitors.

A group of people, on the other hand, attempted to have their Friday prayers in the structure. The security forces directed the group to the Sultanahmet (Blue) Mosque, located right across from Hagia Sophia.

On Wednesday, Ankara and Moscow agreed to resume flights between the two countries following a three and a half month suspension due to the coronavirus outbreak, in a decision highly sought by the Turkish tourism industry.

According to Turkey's Culture and Tourism Ministry, Russian citizens topped the list of foreign tourists and accounted for 15.6% of all arrivals in Turkey in 2019. Some 7 million Russians visited Turkey last year.