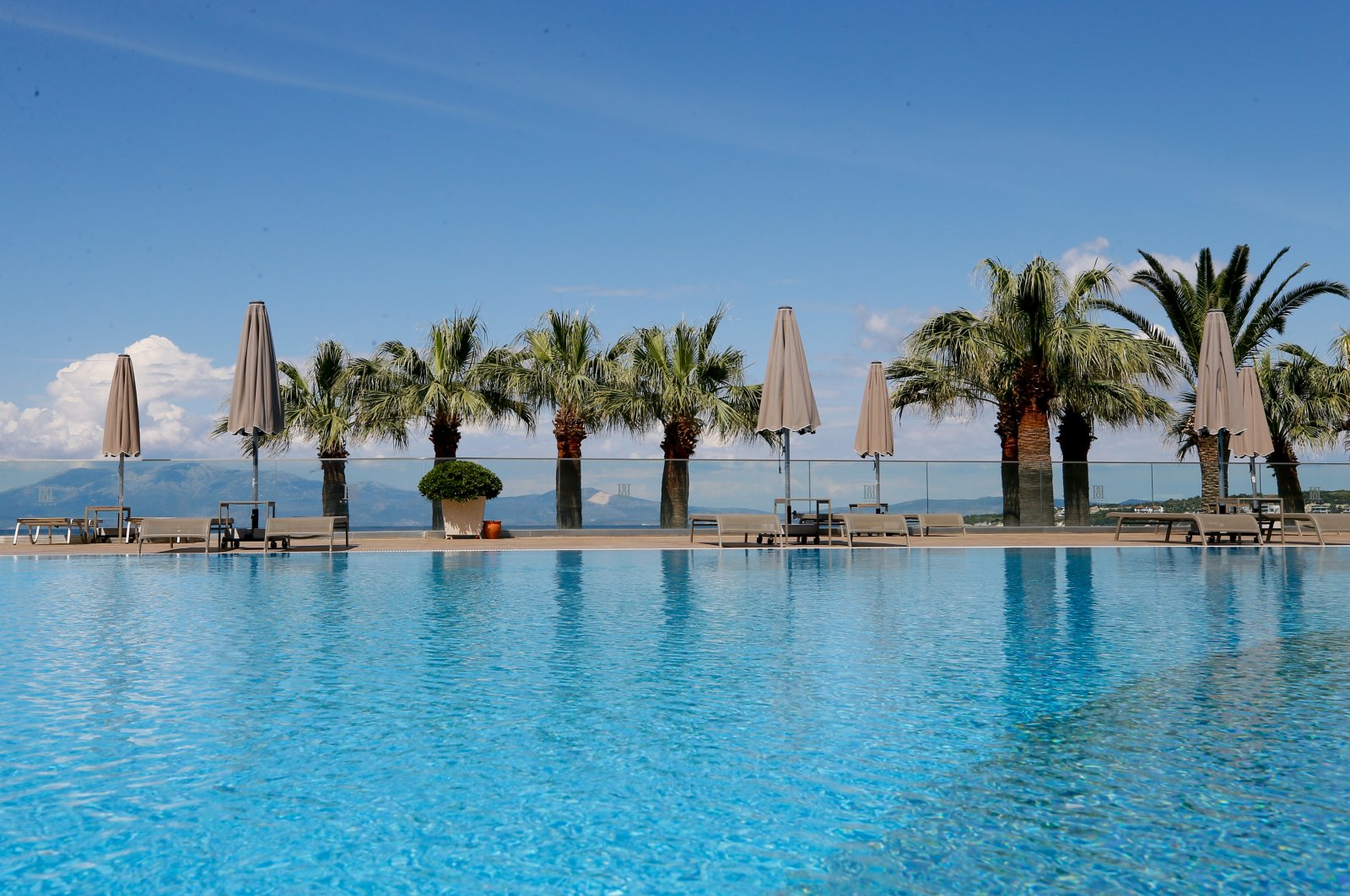 Touristic hot spots and holiday resorts in Turkey’s Aegean region expect their first customers after halting business for a limited time due to the coronavirus outbreak. The measures to create a virus-free and “controlled” vacation have been completed as restrictions around the country have eased in tandem with declining inflection rates.

The hotels, beaches and historical sites in the popular touristic destinations, Çeşme, Kuşadası and Didim in western Turkey’s Izmir and Aydın provinces are among the places ready to open to visitors again in line with coronavirus preventative measures.

With the drop in new virus cases, Turkey has declared that the outbreak is under control in the country, launching a new process of “normalization.” As part of this process, the country is lifting almost all restrictions on June 1, including opening intercity travel and gradually resuming domestic and international flights.

To ensure the safety of local and foreign tourists and employees along with providing the continuation of tourism-related businesses, one of the sectors most affected by the virus outbreak, Turkey has most recently kicked off a program to provide a “healthy tourism certificate.”

Hotels in Aegean are said to be nearing the end of their preparations for the tourism season in accordance with the notice on mandatory measures issued by the Culture and Tourism Ministry following those in Turkey's Mediterranean resort city of Antalya, as part of the program. They have been designing their facilities, including buffets, beaches, lobbies and pools, to ensure social distancing.

The new certificates set criteria for health and hygiene in airlines, airports and other transportation hubs, as well as hotels, restaurants, bars and cafes. They will be awarded by international institutions, and information will be sent to tour operators and will be accessible to tourists.

Culture and Tourism Minister Mehmet Nuri Ersoy recently said COVID-19 testing centers were being set up at airports. Passengers in terminals will be required to wear masks and temperatures will be taken with forehead thermometers.

The COVID-19 regulations also included cultural and historical sites and necessary arrangements to keep social distance were made in sites such as the Ephesus, Aphrodisias and Acropolis in the Aegean, which are on the UNESCO World Heritage List.

Accordingly, guests will be subjected to temperature measurement at the entrances of the sites and those without face masks will not be allowed inside. Staff working at the historic sites will keep liquid disinfectants at the entrances while they will warn those who do not comply with the social distancing rules within the sites.

At the hotels, temperatures of the customers will also be checked and they will wait at the reception abiding by the social distancing markers. Front desk personnel will have to wear visors and face masks.

Tables in restaurants will be arranged in accordance with the social distancing rules and the customers will no longer be allowed to take food from “open buffets;” instead the food will be served by the restaurant staff.

The number of people who are allowed to enter the swimming pools and beaches will also be limited depending on the size of the facility, to prevent overcrowding and hotel staff will regularly warn customers to maintain social distancing even at the sea.

Orhan Belge, vice chairman of Çeşme Touristic Hoteliers Association (ÇEŞTOB), said that preparations have been completed according to the circular provided by the ministry and some hotels have also taken additional measures.

The hotel staff received training in accordance to new rules, Belge said, adding that they will be subjected to health screening more frequently from now on.

Belge, who also serves as the general manager of a hotel in the region, said that they had closed the hotel at the end of March, shortly after the emergence of the first case in the country.

He noted that although there were a few cancellations in March, April and May, most of the preorders by holidaymakers were postponed.

Our foreign guests who were supposed to come in May postponed their holidays to June and July, he said, adding that they expect the foreign visitors to start coming as of June 15 while domestic tourists are expected to come on the first day of June.

Although tourism activities have paused across the globe during the pandemic, many people from different countries have been consistently calling about vacations in Turkey, Professional Hoteliers' Association (POYD) Chairman Ülkay Atmaca also said previously.

"Reservations for the summer are usually made for later dates. A small proportion of early bookings that have their dates approaching were canceled; dates were mostly postponed," he noted.

Stressing that they expect the number of the visitors to increase through October, November and December when compared with last year, Belge also said that the sector is, therefore, hoping to survive the season without any major losses.

He further highlighted that there has been no increase in accommodation prices so far, as the season’s prices are always determined a year before and the agencies are being informed accordingly.

“There is no price increase in any of our hotels due to the pandemic,” he added.

Turkey ranks sixth globally in tourist arrivals, and the sector accounts for around 12% of the nation's economy. The number of foreigners visiting the country plunged 51% on an annual basis to 4.3 million from January to April this year, according to Culture and Tourism Ministry data, down from 8.7 million in the same period last year.