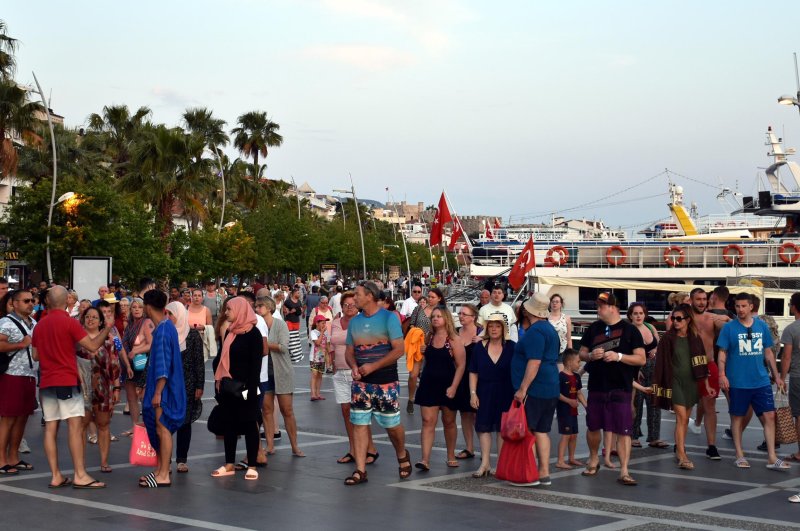 Tourists seen in the town of Marmaris in the western province of Muğla, one of the favorite holiday destinations. (DHA Photo)
by DAILY SABAH Feb 27, 2020 4:53 pm
RECOMMENDED

As governments rev up efforts to battle a looming global pandemic of COVID-19 – the novel coronavirus – amid its rapid spread across Europe, the Middle East and Asia, Turkey is seen among the safest tourism hotspots as it remains free from the coronavirus.

Flights to affected regions have been gradually canceled and fears of the fatal virus have been a cause for concern for those with vacation plans. This has particularly been the case for many Britons who are gearing up for vacation as the Easter holiday approaches.

In addition to the fact that it is already a popular destination for British tourists, Turkey remains unaffected by the virus.

Travel expert Nicky Kelvin – director of content at The Points Guy U.K., express.co.uk – listed Turkey among the short-haul and long-haul hot spots that remain free from the coronavirus.

Resort towns such as Antalya and Muğla have been among British tourists’ favorites in recent years. Just last year, some 2.5 million tourists from the U.K. arrived in Turkey.

What’s more, Turkey holidays are about to get a lot cheaper for Brits, as the country announced last week that it will lift visa restrictions for citizens from six countries, including the U.K., starting March 2.

British citizens will no longer have to pay a fee of approximately 27 pounds for the visa. The new regime will allow entry for up to 90 days per 180-day period.

Association of British Travel Agents (ABTA) has recently listed Turkey as one of its favorite destinations for winter sun. Post Office Travel Money’s recent report has also found Turkey to be the home of the cheapest resorts out of 42 destinations surveyed.

“No city in the world compares to Istanbul,” Kelvin told British daily Express, as he called the large metropolis that spreads across two continents the cultural heart of Turkey and full of history.

He also suggested the Aegean province of İzmir and its Selçuk district – a gateway spot full of history and culture – to British citizens.

“The city of İzmir might be the axis of Turkey’s mid-Aegean region, but the nearby town of Selçuk has all the charm without the city crowds. Selçuk has wide boulevards lined with orange trees and ancient ruins sprinkled throughout the town center,” he said.

Turkey's tourism enjoyed another buoyant year in 2019 with more visitors and soaring revenues. Tourism revenues hit $34.5 billion last year, a record high. This is a 17% increase compared with the sector's revenue of $29.5 billion in 2018.

According to the Culture and Tourism Ministry, the number of foreigners visiting the country surged 14.1% on an annual basis, surpassing 45 million last year. Turkey was the sixth most-visited country in the world last year, according to the U.N. World Tourism Organization (UNWTO). In 2018, 39.5 million international visitors came to Turkey.

In the meantime, the coronavirus’ rapid spread around the world left alarmed governments and people across the globe rushing to implement emergency measures.

The outbreak has wreaked havoc on global aviation and tourism as airlines cancel flights, countries ban visitors from hot spots and nervous passengers put off travel.

The coronavirus has mainly battered China, causing more than 80,000 cases and nearly 2,800 deaths.

Turkish Airlines (THY) Thursday said it was reducing flight frequency to South Korea’s capital Seoul and has temporarily suspended flights to Azerbaijan's autonomous Nakhchivan region as part of measures.

The carrier’s chairman İlker Aycı said if necessary, the company could initially reduce flights to Rome and Milan, and later on, could suspend them. THY earlier this week canceled its flights to Iran, along with flights to China.

Saudi Arabia early Thursday temporarily suspended entry for individuals aiming to perform the Umrah pilgrimage or to visit the Prophet's Mosque in Medina over concerns of the spread of coronavirus.

Turkey brought a number of Turkish citizens home from Iran on Tuesday on a specially arranged evacuation flight carrying 142 people, including crew members, and placed all under quarantine in the capital Ankara. None of the 142 people tested positive for coronavirus, Health Minister Fahrettin Koca said.

Turkey has already closed its land border with Iran as a precaution to stop the potential spread of the coronavirus.

Visiting eastern Ağrı province Thursday where he was investigating measures against coronavirus at Gürbulak-Bazargan customs gate between Turkey and Iran, Koca informed that the Turkish citizens living in Iran will have to undergo a 14-day compulsory quarantine period in case they want to return to Turkey.

Koca noted that Turkey started thermal screening of all passengers coming to the country even before the warnings of the World Health Organization (WHO) on the issue.

The WHO has declared the outbreak an international health emergency.