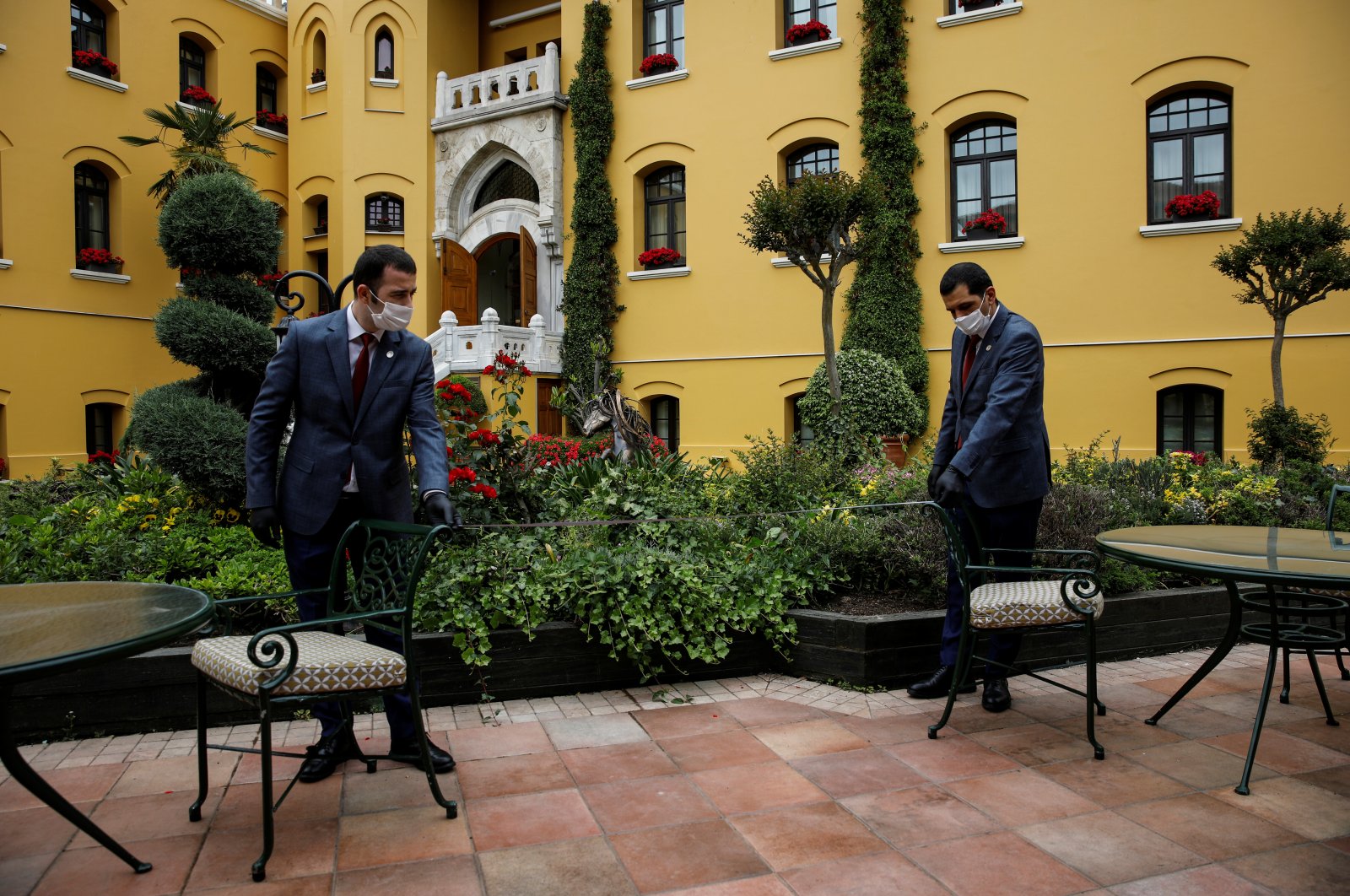 Four Seasons Sultanahmet Hotel staff members measure distance between tables and chairs as they check the readiness of the hotel to the Healthy Tourism Certificate Program, Istanbul, Turkey, May 21, 2020. (Reuters Photo)
by REUTERS May 22, 2020 8:20 pm
RECOMMENDED

At a luxury hotel in Istanbul, staff in gloves and masks space out and disinfect tables as they prepare for a scheme which Turkey hopes will rescue part of its $35 billion tourism industry from the ravages of coronavirus.

The “healthy tourism certificate” program aims to convince travelers that despite the global pandemic, Turkey’s beaches and historic treasures will be safe to visit this year, with rigorous checks on airlines, local transport and hotels.

“The more transparent and detailed information we give, the more we will earn the confidence of tourists,” Tourism Minister Mehmet Ersoy told Reuters, setting out plans to open at least half of Turkey’s hotels this year.

With so much at stake, the government is intensively lobbying 70 countries to convince them that Turkey will be a safe destination as it gradually eases its domestic lockdown.

The new certificates set criteria for health and hygiene in airlines, airports and other transport, as well as hotels, restaurants, bars and cafes. They will be awarded by international institutions and information will be sent to tour operators and will be accessible to tourists.

“If you put all these together, we create a better chance for Turkey to recover faster,” Mourad said on a terrace overlooking Hagia Sophia, once Christendom’s foremost cathedral and then a mosque before becoming a leading tourist attraction as a museum.

Travel company TUI said it had offers for travel from June 15. Leisure airline Corendon hopes to launch a summer package in late June, whereby Dutch holidaymakers will be tested for the virus before flying and will remain restricted to hotel grounds.

Ersoy said COVID-19 testing centers were being set up at airports.

“Those guests who come without having been tested in the last 72 hours will all be tested,” he said.

Passengers in terminals will be required to wear masks, and temperatures will be taken with forehead thermometers.

The project has drawn support from the tourism sector but there are worries about the level of international interest.

“We have to be realistic; this will be a slow process. The opening of 50% (of hotels) in July would be a big success in my opinion,” said Erkan Yağcı, chairman of the Mediterranean Touristic Hoteliers and Investors Association.

Turkish Travel Agents Association Chairman Firuz Bağlıkaya said the main foreign arrivals would not be until September-October, and Russia, the leading market, which sent 7 million tourists last year, would start later than others.

Foreign currency earnings from tourism may fall 60-70% this year, with the domestic market halving in size, he said.

The initial test from the end of this month will be the resumption of domestic tourism, but the real prize in terms of visitor numbers and revenues is foreign tourists.

In the Mediterranean tourism hub of Antalya, domestic tourists made up less than 20% of some 100 million annual overnight stays, according to the owner of a holiday complex in the region who declined to be named.

“The rest is... foreign visitors. Without them, there is no point in opening,” he said.