Trading halted on Wall Street after stocks plunge 7% at open 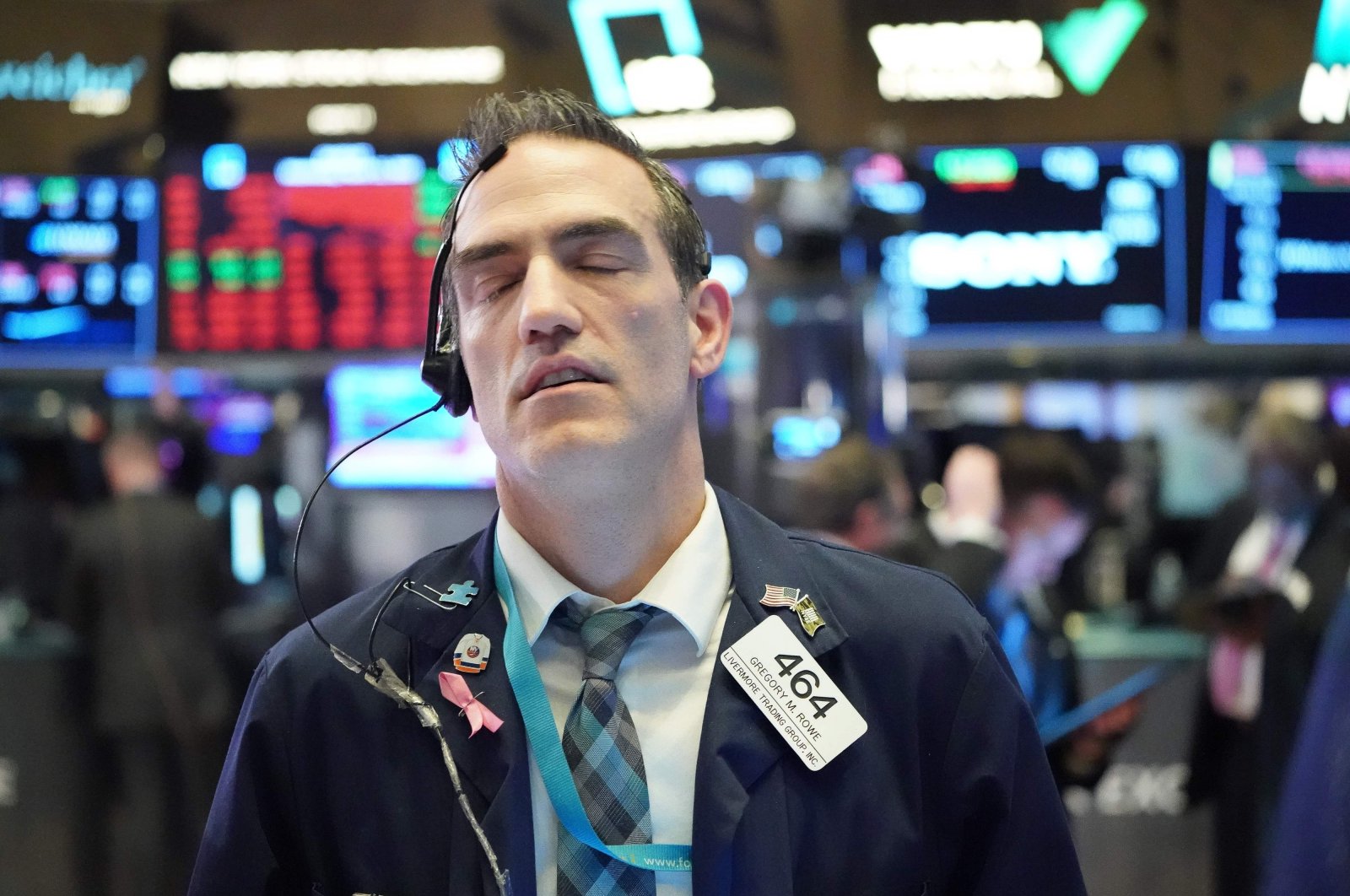 Traders work on the floor at the closing bell of the Dow Industrial Average at the New York Stock Exchange on March 11, 2020 in New York. (AFP Photo)
by Associated Press Mar 12, 2020 4:47 pm
RECOMMENDED

An early plunge of 7% on Wall Street triggered a trading halt as a sell-off slamming global markets continued. The Dow Jones industrials dropped more than 1,600 points, or 7%, the S&P 500 fell a similar amount. Trading resumes after 15 minutes.

The rout came after President Trump imposed a travel ban on most of Europe and offered few new measures to contain the economic impact of the coronavirus outbreak. Benchmarks in Europe fell more than 7% even after the European Central Bank announced more stimulus measures. World markets are enduring violent swings amid uncertainty about how badly the outbreak will hit the economy.

Global stocks plunged Thursday after U.S. President Donald Trump imposed a travel ban on most of Europe and offered little in the way of new measures to contain the economic impact of the virus outbreak.

European markets sank, with shares in airlines like Air France and Lufthansa down about 10%. Wall Street futures were down about 5%, likely putting the S&P 500 in a bear market when trading starts, like the Dow a day before.

Global markets began falling again after Trump's address to the nation late Wednesday, in which he announced vast travel restrictions on Europe that aim to limit the virus from spreading but will further hurt the travel industry.

His move also raises the specter of more drastic measures by governments that will hurt business between the world's top economies.

Trump hinted at plans for tax cuts and other economic relief, has yet to unveil details. Lawmakers have resisted his proposal for a cut to payroll taxes.

"The market judgement on that announcement is that it’s too little too late. And while travel restrictions on people coming from Europe are good from a health point of view, from the point of view of the economy, it’s very, very bad news," said Michael McCarthy of CMC Markets.

Investors are also looking ahead to the European Central Bank's policy meeting, expecting it to cut interest rates and offer more monetary stimulus, though experts say it is governments that must act to help the economy.

The future contract for the Dow Jones Industrial Average slumped 5.2% while the S&P 500's lost 4.9%.

On Wall Street overnight, the Dow fell into bear market territory, with a loss that dragged it 20% below the record set last month. The broader S&P 500, which professional investors watch more closely, is a single percentage point away from falling into its own bear market, which would end the longest bull market in Wall Street history.

Thailand's benchmark plunged 10% in the afternoon session, triggering a 30-minute halt to trading. It fell further after trading resumed, losing 11%. The Philippine market lost 10%, also resulting in a trading halt. In both cases the declines were the worst single-day losses since the 2008 financial crisis. India's Sensex swooned 8.6%.

The recent decline has been one of Wall Street's swiftest retreats of this magnitude. The fastest the S&P 500 has ever fallen from a record into a bear market was over 55 days in 1987.

Vicious market swings are becoming routine as investors rush to sell amid uncertainty about how badly the outbreak will hit the economy.

Some economies were already slowing before the viral outbreak even began to cause massive disruptions, first in central China where the virus originated and gradually across Asia.

Investors would like to see coordinated action from governments and central banks to stem the threat to the economy from the virus. Lower interest rates and government spending won't solve the crisis - only containment of the virus can - but they can spur business activity and help prop up demand.

The vast majority of people recover from the new virus, but the fear is that the global economy could tip into a recession, with slowdowns in production and a plunge in business activity as people stay home instead of traveling, shopping or dining out.

Many analysts expect markets to swing sharply until the number of new infections stops accelerating. In the United States, the number of cases has topped 1,000. Worldwide, more than 126,000 people have been infected, and over 4,600 have died.

Treasury yields, one of the loudest alarm bells on Wall Street about the economic risks of the crisis, remain well below 1%, with the yield on the 10-year Treasury at 0.71% from 0.83% late Wednesday. That's a sign of diminished demand for safe investments.