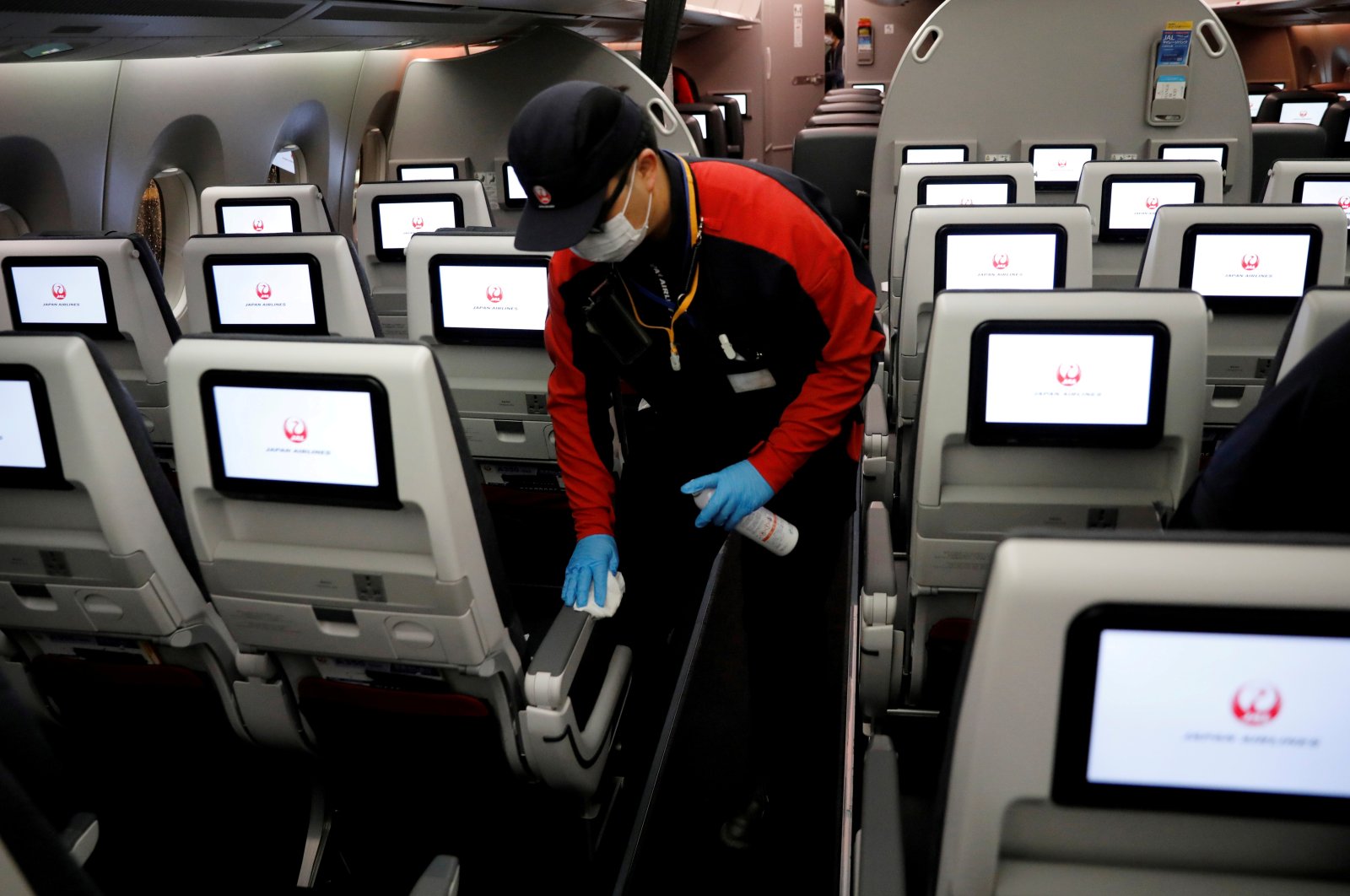 A staff member of Japan Airlines wearing a protective face mask and gloves cleans the cabin of a plane after performing a domestic flight as passengers disembarked at Haneda airport on the first day after the Japanese government lifted the state of emergency, Tokyo, Japan, May 26, 2020. (Reuters Photo)
by REUTERS
Oct 19, 2020 4:29 pm

A campaign by coronavirus-stricken aviation giants to persuade the world it's safe to fly has been questioned by one of the scientists whose research it draws upon.

Dr. David Freedman, a U.S. infectious disease specialist, said he declined to take part in a recent presentation by global airline body IATA with plane-makers Airbus, Boeing and Embraer that cited his work.

While he welcomed some industry findings as "encouraging," Freedman said a key assertion about the improbability of catching COVID-19 on planes was based on "bad math."

Airlines and plane-makers are anxious to restart international travel, even as the second wave of infections and restrictions take hold in many countries.

The Oct. 8 media presentation listed in-flight infections reported in scientific studies or by IATA airlines, and compared the tally with total passenger journeys this year.

"With only 44 identified potential cases of flight-related transmission among 1.2 billion travelers, that's one case for every 27 million," IATA medical adviser Dr. David Powell said in a news release, echoed in comments during the event.

IATA said its findings "align with the low numbers reported in a recently published peer-reviewed study by Freedman and Wilder-Smith."

But Freedman, who co-authored the paper in the Journal of Travel Medicine, said he took issue with IATA's risk calculation because the reported count bore no direct relation to the unknown real number of infections.

"They wanted me at that press conference to present the stuff, but honestly I objected to the title they had put on it," the University of Alabama academic told Reuters.

"It was bad math. 1.2 billion passengers during 2020 is not a fair denominator because hardly anybody was tested. How do you know how many people really got infected?" he said. "The absence of evidence is not evidence of absence."

IATA maintains that its calculation is a "relevant and credible" sign of low risk, a spokesperson said in response to requests for comment from the organization and its top medic Powell.

"We've not claimed it's a definitive and absolute number."

The head of British Airways directly invoked the one-in-27 million ratio to press for a lifting of quarantines on Monday.

"We know public safety is key for the government, so it should be reassured by IATA's new figures," Chief Executive Sean Doyle told a U.K. aviation conference.

Freedman's research partner Dr. Annelies Wilder-Smith of the London School of Hygiene and Tropical Medicine could not immediately be reached for comment.

While the pandemic has seen some carriers leave middle seats empty to reassure customers, the industry has opposed making such measures mandatory.

Plane cabins are considered lower-risk than many indoor spaces because of their powerful ventilation and their layout, with forward-facing passengers separated by seat rows. Ceiling-to-floor airflows sweep pathogens into high-grade filters.

That understanding is supported by simulations and tests run by the aircraft makers as well as a U.S. Defense Department study released Thursday.

The joint presentation with all three manufacturers signaled a rare closing of ranks among industrial archrivals, behind a message designed to reassure.

Airbus showed similar findings, while Embraer tested droplet dispersal from a cough. Some 0.13% by mass ended up in an adjacent passenger's facial area, falling to 0.02% with masks.

Dr. Henry Wu, associate professor at Atlanta's Emory School of Medicine, said the findings were inconclusive on their own because the minimum infective dose remains unknown, and risks increase in step with exposure time.

"It's simply additive," said Wu, who would prefer middle seats to be left empty. "A 10-hour flight will be 10 times riskier than a one-hour flight."

Nonetheless, a commercial jet cabin is "probably one of the safer public settings you can be in," he added. "Sitting at a crowded bar for a few hours is going to be much riskier."

Scientists are pouring over dozens of on-board infection cases, as well as flights with contagious passengers but no known transmission.

On March 11 infectious passengers on a five-hour Sydney-Perth flight passed the virus to 11 others, according to a paper in the Emerging Infectious Diseases journal.

Among those infected, two were seated three rows away from a contagious passenger and one was six rows away, suggesting that typical two-row contact-tracing might have missed them.

One sufferer on a 10-hour London-Hanoi flight the same month infected 16 others including 12 in her business-class cabin, according to a study by Vietnamese and Australian academics.

"Long flights ... can provide conditions for superspreader events," the study said, adding that its findings "challenge" the airlines' assertion that on-board distancing is unnecessary.

IATA points out that many of the flights examined by scientists in published studies occurred before mask-wearing became widespread and reduced infection risks.

Its presentation did concede that the 44-case tally "may be an underestimate" while maintaining that in-flight infections remained less likely than a lightning strike even if only 10% of actual cases had made the count.

"That's misleading," Emory's Wu said. "Thinking about how hard it is to identify them, I wouldn't be surprised if it's far less than 1%. The only thing I'm sure of is that it's a fantastic underestimate."