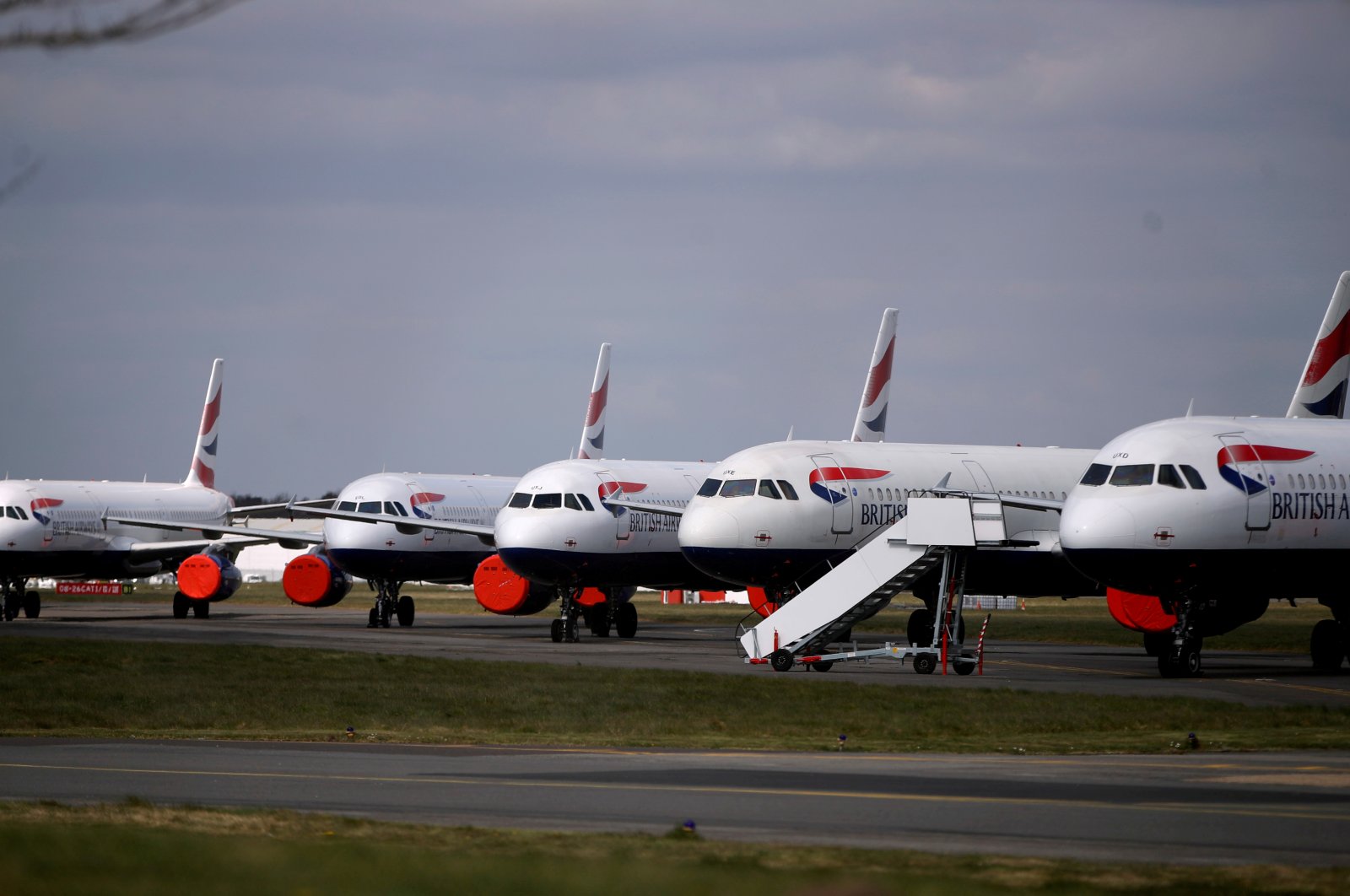 British Airways planes are seen parked at Bournemouth Airport, as the spread of the coronavirus disease continues, Bournemouth, Britain, April 1, 2020. (Reuters Photo)
by REUTERS
Apr 29, 2020 10:54 am

British Airways plans to cut more than a quarter of its jobs due to the coronavirus crisis, parent company IAG said on Tuesday, forecasting that passenger numbers will take years to recover.

Revenue dropped 13% to 4.6 billion euros. IAG said it expected significantly worse losses in the second quarter, reflecting the full extent of travel lockdowns during the pandemic.

In a statement, it said the sweeping restructuring at BA will probably "affect most of British Airways' employees and may result in the redundancy of up to 12,000 of them." Union leaders criticized the plans and said the airline should have worked to secure more government aid to avoid cutting jobs.

Chief Executive Officer Alex Cruz told staff that BA was doing everything possible to conserve cash, including renegotiating contracts and looking at options for its fleet, but it would not be enough.

"In the last few weeks, the outlook for the aviation industry has worsened further and we must take action now," he said in a letter to staff seen by Reuters.

"There  is no government bailout standing by for BA and we cannot expect the taxpayer to offset salaries indefinitely. Any money we borrow now will only be short-term and will not address the longer-term challenges we will face."

"This has come as a bolt out of the blue from an airline that said it was wealthy enough to weather the COVID storm and declined any government support," BALPA General Secretary Brian Strutton said.

"BALPA does not accept that a case has been made for these job losses and we will be fighting to save every single one."

Unite the Union, which also represents BA workers, said it was a "heartless decision and entirely at odds with the course of action followed by our European competitors as they seek a way through the coronavirus crisis."

Earlier this month, BA used Britain's COVID-19 jobs retention scheme to furlough 22,626 employees. Under the scheme, the government takes on part of the cost of retaining staff who remain on the payroll while being sent home during the crisis.

Echoing comments from rivals such as Lufthansa, IAG said it would take several years for passenger demand to return to 2019 levels.

Governments in Europe and the United States are providing payroll support to airlines while the industry battles its biggest ever crisis.

Estimated global airline losses from the coronavirus pandemic have climbed to $314 billion, the International Air Transport Association said on April 14. More than half the world's airplanes are in storage.

The French and Dutch governments have agreed on an aid package for Air France-KLM worth up to 11 billion euros.

Lufthansa, Europe's biggest carrier by revenue, is in talks with the German government about a 9 billion euro rescue plan, according to sources.

Cruz, however, said Ba had overcome many crises in its 100 year history. " We must overcome this crisis ourselves, too," he said.

IAG said its second-quarter operating loss would be significantly worse than the first quarter loss due to the decline in passenger capacity and traffic, despite some relief from government job retention and wage support schemes. It did not give 2020 profit guidance.

It said it had taken an exceptional charge of 1.3 billion euros at the end of the quarter on over-hedging on fuel and foreign currency for the rest of the year. Last month, the crisis prompted IAG boss Willie Walsh, a dealmaker who made his name standing up to unions and cutting costs, to put off plans to retire.

Highlighting the speed of the damage as governments imposed lockdowns to contain the pandemic, IAG said all the decline in operating profit in the first quarter came in March.