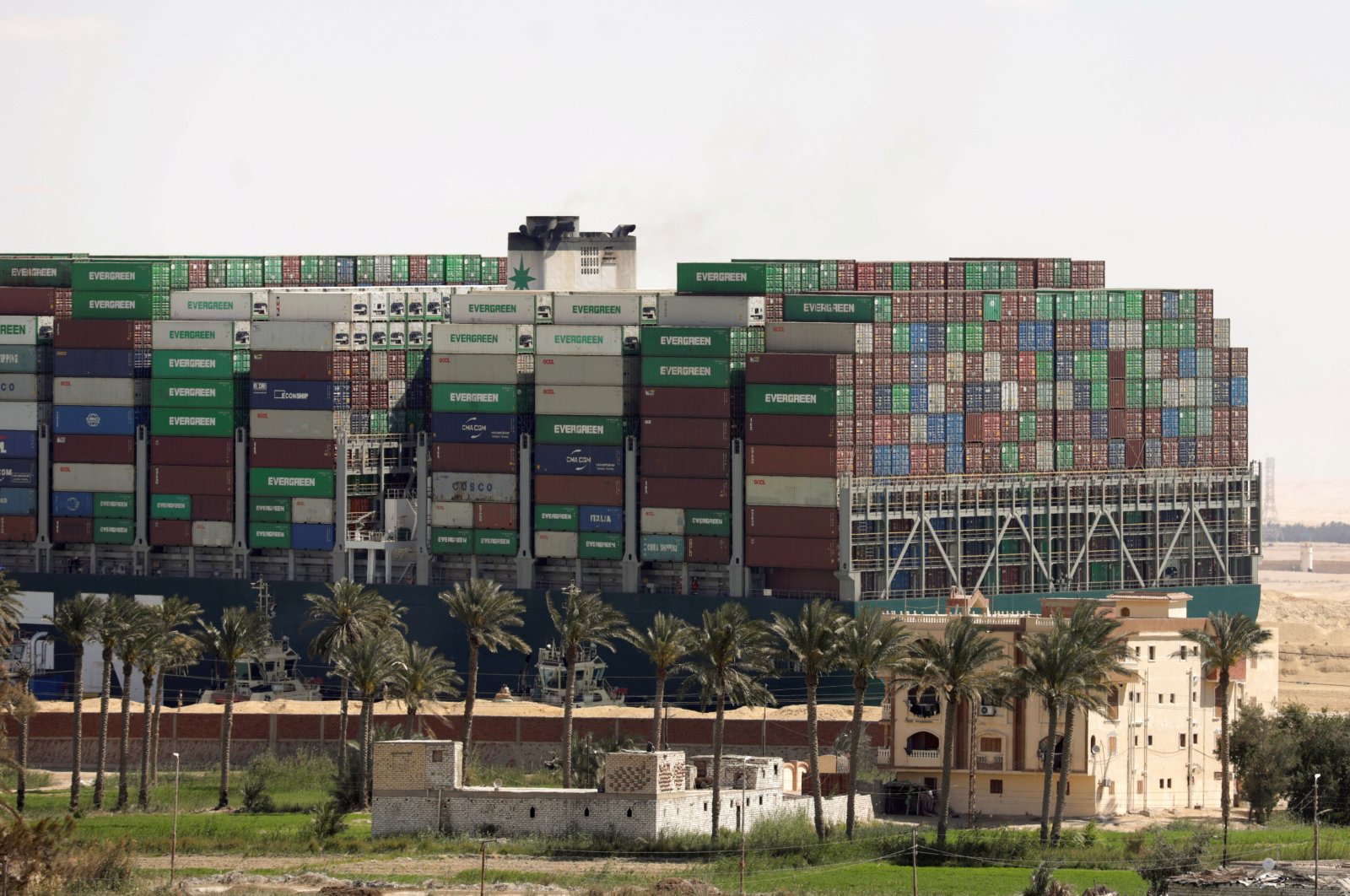 The ship Ever Given, one of the world's largest container ships, passes by a house after it was partially refloated in Suez Canal, Egypt, March 29, 2021. (Reuters Photo)
by Associated Press
Mar 31, 2021 4:44 pm

Divers inspected the underside of a colossal containership that had blocked the Suez Canal, spotting some damage to the bow but not severe enough to ground the vessel, officials said Wednesday.

The dives were part of a continuing investigation into what caused the grounding of the Ever Given, now anchored in the Great Bitter Lake, a wide stretch of water halfway between the north and south ends of the canal.

Salvage teams succeeded in finally freeing the skyscraper-sized vessel on Monday afternoon. The ship had gotten stuck sideways in a narrow stretch of the canal, shaking the global shipping industry when it halted billions of dollars a day in maritime commerce for around a week.

Two senior canal officials, speaking on condition of anonymity because they were not authorized to talk to reporters, told The Associated Press (AP) that "slight to medium” damage was found at the vessel’s bulbous bow.

One of the officials, who is a canal pilot, said experts were studying the extent of damage, but he said it is unlikely that it would impede the Panama-flagged, Japanese-owned ship’s navigation. He said the navigation of the ship would depend on "several legal and procedural” measures that the canal authority would discuss with Ever Given’s operator.

Investigations were ongoing to determine what caused the massive ship to become wedged across the canal. When blame gets assigned, it will likely lead to years of litigation to recoup the costs of repairing the ship, fixing the canal and reimbursing those who saw their cargo shipments disrupted.

The vessel is owned by a Japanese firm, operated by a Taiwanese shipper, flagged in Panama and now stuck in Egypt, so matters could quickly become complicated.

The vessel was freed Monday after a flotilla of tugboats, helped by the tides, wrenched its bulbous bow from the canal’s eastern bank, where it had been firmly lodged since March 23.

The canal was reopened for traffic Monday directly after the Ever Given was anchored at the Great Bitter Lake. Convoys of ships have since been seen traveling through the artery linking the Mediterranean and Red Seas.

A total of 292 vessels have waited to pass through the Suez Canal, either to the Mediterranean or the Red Sea, according to canal services firm Leth Agencies. As of noon Wednesday, more than 160 vessels have passed through the canal since it reopened March 29, it said.

Lt. Gen. Ossama Rabei, head of the canal authority, said Wednesday they would work around the clock to clear the backlog on either end of the canal.

The Ever Given had crashed into a bank of a single-lane stretch of the canal about 6 kilometers (3.7 miles) north of the southern entrance, near the city of Suez. That created a massive traffic jam that held up $9 billion a day in global trade and strained supply chains already burdened by the coronavirus pandemic.

The unprecedented shutdown, which raised fears of extended delays, goods shortages and rising costs for consumers, added to strain on the shipping industry already under pressure from the pandemic.

The six-day closure of the canal would "create a domino effect of delays for goods to be delivered and for the backlog of shipments to be processed through, said Diego Pantoja-Navajas, an expert in supply chain logistics and vice president of WMS Cloud Development, Oracle.