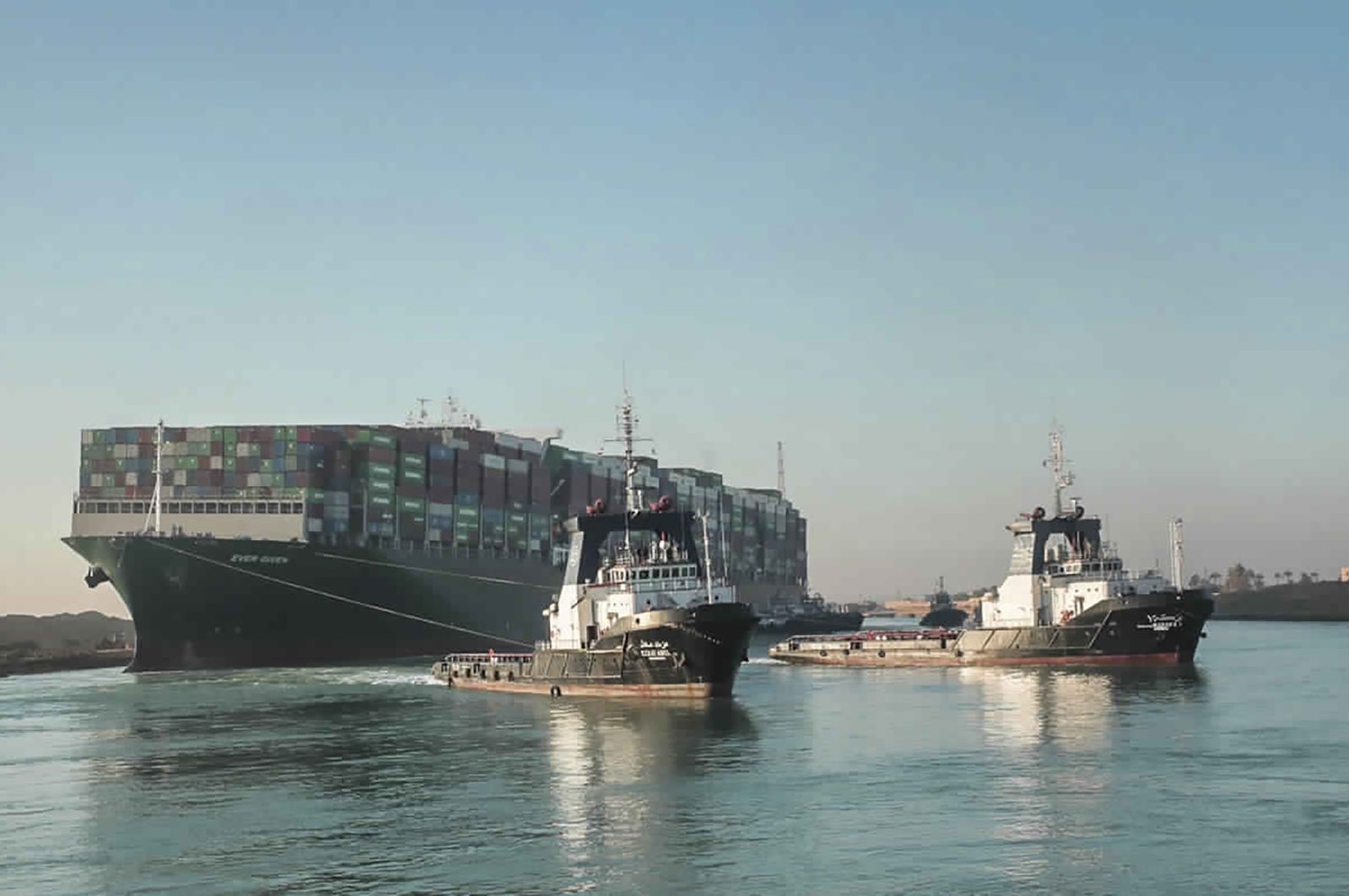 Shipping traffic through Egypt's Suez Canal resumed Monday after a giant container ship that had been blocking the busy waterway for almost a week was refloated, the canal authority said.

The 400-meter (430-yard) Ever Given became jammed diagonally across a southern section of the canal in high winds early last Tuesday, halting traffic on the shortest shipping route between Europe and Asia.

"She's free," an official involved in the salvage operation was cited as saying by Reuters.

After dredging and excavation work over the weekend, rescue workers from the Suez Canal Authority (SCA) and a team from Dutch firm Smit Salvage succeeded in partially refloating the vessel early on Monday using tug boats, two marine and shipping sources said.

Efforts to completely free the ship continued throughout the day.

Video released by the SCA showed the Ever Given being escorted by the tugboats that helped free it, each sounding off their horns in jubilation after nearly a week of chaos.

“We pulled it off!” Peter Berdowski, CEO of Boskalis, the salvage firm hired to extract the Ever Given, was cited by The Associated Press as saying in a statement. “I am excited to announce that our team of experts, working in close collaboration with the Suez Canal Authority, successfully refloated the Ever Given ... thereby making free passage through the Suez Canal possible again."

At least 369 vessels have piled up on either end of the canal, waiting to transit the canal, including dozens of container ships, bulk carriers, oil tankers and liquefied natural gas (LNG) or liquefied petroleum gas (LPG) vessels, SCA Chairman Osama Rabie said.

The SCA has said it can accelerate convoys through the canal once the Ever Given is freed. "We will not waste one second," Rabie told Egyptian state television.

He said it could take from two-and-a-half to three days to clear the backlog, and the canal source said more than 100 ships would be able to enter the channel daily.

Shipping group Maersk said the knock-on disruptions to global shipping could take weeks or months to unravel. Data firm Refinitiv estimated it could take more than 10 days to clear the backlog of ships.

After hauling the fully laden 220,000-ton vessel over the canal bank, the salvage team was pulling the vessel toward the Great Bitter Lake, a wide stretch of water halfway between the north and south end of the canal, where the ship will undergo technical inspection, canal authorities said.

The obstruction has created a massive traffic jam in the vital passage, holding up $9 billion each day in global trade and straining supply chains already burdened by the coronavirus pandemic.

Meanwhile, dozens of vessels have opted for the alternate route around the Cape of Good Hope at Africa’s southern tip – a 5,000-kilometer (3,100-mile) detour that adds some two weeks to journeys and costs ships hundreds of thousands of dollars in fuel and other costs.

The freeing of the vessel came after dredgers vacuumed up sand and mud from the vessel’s bow and 10 tugboats pushed and pulled the vessel for five days, managing to partially refloat it at dawn.

It wasn’t clear whether the Ever Given, a Panama-flagged, Japanese-owned ship hauling goods from Asia to Europe, would continue to its original destination of Rotterdam or if it would need to enter another port for repairs.

In a statement, Evergreen Line said the container ship would be inspected for seaworthiness.

Evergreen informed that decisions regarding the vessel's cargo would be made after the inspection and that it would coordinate with the ship's owner after investigation reports were completed.

Ship operators did not offer a timeline for the reopening of the crucial canal, which carries over 10% of global trade, including 7% of the world’s oil. Over 19,000 ships passed through last year, according to canal authorities.

Millions of barrels of oil and liquified natural gas flow through the artery from the Persian Gulf to Europe and North America. Goods made in China – furniture, clothes, supermarket basics – bound for Europe also must go through the canal, or else take the detour around Africa.

The unprecedented shutdown had threatened to disrupt oil and gas shipments to Europe from the Middle East and raised fears of extended delays, goods shortages and rising costs for consumers.

The salvage operation successfully relied on tugs and dredgers alone, allowing authorities to avoid the far more complex and lengthy task of lightening the vessel by offloading its 20,000 containers.