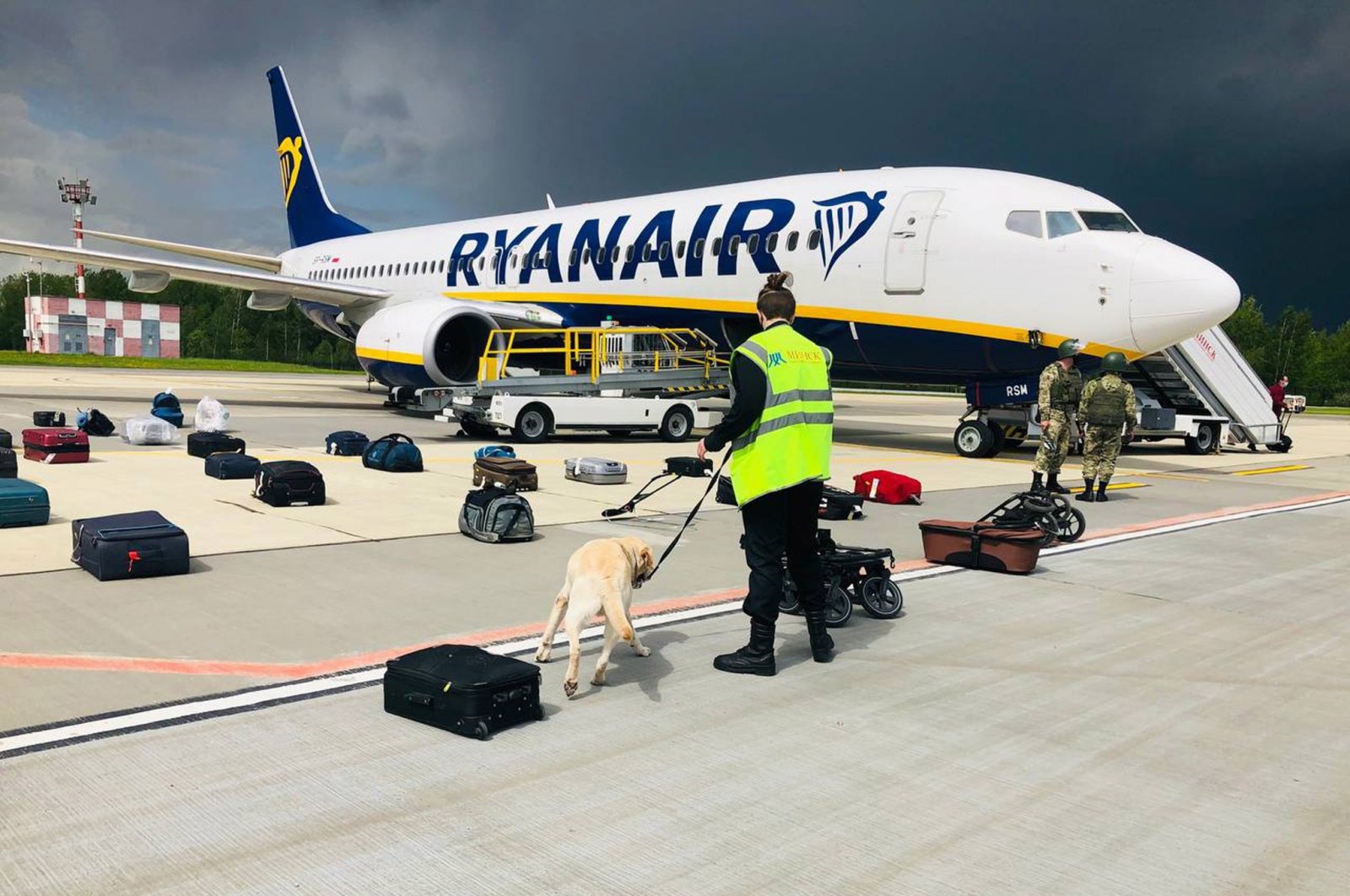 Security with a sniffer dog checks the luggage of passengers in front of the Ryanair Boeing 737-8AS (flight FR4978), carrying opposition figure Roman Protasevich, in Minsk, Belarus, May 23, 2021. (EPA Photo / ONLINER.BY handout photo)
by REUTERS May 24, 2021 10:39 pm
RECOMMENDED

The detention of a dissident journalist from a passenger jet forced to land by Belarus over a false bomb alert prompted the biggest crisis in global aviation in years, with several countries and airlines scrapping flights that could be followed by a major boycott or hard-to-achieve overall flight ban.

European Union leaders meeting on Monday evening were set to ban Belarussian airlines from their bloc's airspace and call on EU-based carriers to avoid flying over the former Soviet republic, according to a draft statement seen by Reuters. The leaders of the 27 member states will also consider widening the list of Belarussian individuals they already sanction and call on the International Civil Aviation Organization (ICAO) to urgently investigate Sunday's incident, when Belarus forced a Ryanair plane to land.

"The reaction should be swift and be severe," Belgian Prime Minister Alexander de Croo told journalists ahead of the EU summit that began at 5 p.m. GMT.

Irish Foreign Minister Simon Coveney, using language that was echoed by a number of other EU countries, said, "This was effectively aviation piracy, state sponsored."

A spokesperson for U.N. Secretary-General Antonio Guterres said he was "deeply concerned" by the incident and called for a full investigation.

The three Baltic states said Belarusian airspace should be declared "unsafe" and – as regional tensions mounted – Belarus and Latvia said they were expelling each other's ambassadors.

"We, like all the European airlines are looking for guidance today from the European authorities and from NATO," Ryanair Chief Executive Michael O'Leary told Ireland's Newstalk radio.

Britain said it was issuing a notice to instruct British airlines to cease flights over Belarus and that it would suspend the air permit for Belarus's national carrier Belavia with immediate effect.

Lithuania's transport minister, Marius Skuodis, said Poland's LOT and Hungarian airline Wizzair would also not use Belarusian airspace and said all flights to and from Lithuanian airports must from midnight GMT avoid Belarusian airspace.

Others, including Chinese and Turkish carriers, continued to fly over Belarus, which charges euro-denominated fees to use its airspace. Each flight brings Minsk revenue equivalent to some $500, adding up to millions each year, a Belarus official said.

The European Union Aviation Safety Agency (EASA) said it had notified its 31 member states about the incident and an airline source said the agency had recommended "caution" over Belarus.

Aviation experts said a decades-old system of cooperation now faces a crucial test under the glare of East-West tensions.

"ICAO is strongly concerned by the apparent forced landing of a Ryanair flight and its passengers, which could be in contravention of the Chicago Convention," it said on Sunday.

The Montreal agency called a meeting of its 36-member council, which has the power to investigate any situation that may hinder the development of international aviation, for Thursday.

"It looks like a gross abuse of the (Chicago) Convention. It's piracy," Kevin Humphreys, a former Irish aviation regulator, said of the Belarus incident.

But experts cautioned that calls from some Western politicians for the outright closure of Belarus airspace would come up against tough obstacles.

Under global rules, neither ICAO nor any nation can close another's airspace, but some, such as the United States, have the power to tell their own airlines not to fly there.

"A full investigation by competent international authorities is needed," said the International Air Transport Association, which represents about 280 airlines. Ryanair is not a member. It was not immediately clear how any probe would be organized.

Although highly regulated at a national level, and supported by harmonized rules to keep skies safe, aviation lacks a global policeman to avoid constant disputes over sovereignty.

While it has no regulatory power, ICAO sits at the center of a system of safety and security standards that operates across political barriers but requires an often slow-moving consensus. The rules are managed through the Montreal-based agency by its 193 members, including Belarus.

ICAO was thrown into discord over a wave of hijackings in the 1980s. Back then, the issue was whether to oblige countries to agree to let hijacked aircraft land on their soil.

Humphreys said it would be the first time in memory that the agency has had to ponder accusations that one of its own member countries had carried out what Ryanair's O'Leary called "state-sponsored hijacking."

Belarus insisted the alert was not a hoax and said its controllers had only issued "recommendations" to Ryanair pilots. Russia accused the West of hypocrisy, citing the case of a Bolivian presidential plane forced to land in Austria in 2013 or a Belarus jetliner ordered to land in Ukraine three years later.

In 2013, Bolivia said President Evo Morales' plane had been diverted over suspicions that former U.S. spy agency contractor Edward Snowden, wanted by Washington for divulging secret details of U.S. surveillance activities, was on board. But aviation experts said the freedoms extended to civil airliners do not apply to presidential or state aircraft, which need special permission to enter another country's airspace.

In the 2016 incident, Belarus national carrier Belavia said it had demanded compensation from Ukraine.

Lawyers say any probe or legal claim would also have to plough through a tangle of jurisdictions typical of liberalized air travel: A Polish-registered jet flown by an Irish group between EU nations Greece and Lithuania, over non-EU Belarus.

Under the 1944 Chicago Convention, each country has sovereignty over its own airspace, though the treaty prohibits any use of civil aviation that may endanger safety. But the right to overfly other countries is contained in a side treaty called the International Air Services Transit Agreement, of which Belarus is not a member.

A separate 1971 treaty that includes Belarus outlaws the seizure of aircraft or knowingly communicating false information in a way that endangers aircraft safety.

Countries also called for the release of 26-year-old Roman Protasevich, who was detained when the plane was forced to land in Minsk, the Belarusian capital.

His social media feed from exile has been one of the last remaining independent outlets for news about Belarus since a mass crackdown on dissent last year. Sophia Sapega, a 23-year-old student travelling with him, was also detained.

NEXTA, a news service where Protasevich worked before setting up his own widely followed blog, ran an interview with his mother, who said that as soon as she heard reports of a bomb scare on a flight, she knew it was a plot to capture him.

"I just want to say that my son is simply a hero, simply a hero," Natalia Protasevich said, weeping. "I truly hope that the international community will wake up for him."

EU summit chairman Charles Michel said the incident was "an international scandal," and the statement drafted for the meeting said new sanctions would be imposed as soon as possible.

The EU and the United States imposed several rounds of financial sanctions against Minsk last year, which had no effect on the behavior of Lukashenko, who withstood mass demonstrations against his rule after a disputed election.

Lukashenko denies election fraud. Since the disputed vote, authorities rounded up thousands of his opponents, with all major opposition figures now in jail or exile.

German Chancellor Angela Merkel also demanded the release of Protasevich's partner, Sofia Sapega, who is believed to have been detained along with him.

No bomb was found aboard and Merkel said all of Minsk's explanations for the maneuver so far had been "totally unbelievable."

Belarus said it is open to an international investigation into the forced landing. Foreign Ministry Spokesperson Anatoly Glass rejected EU criticism and said that Minsk had fully complied with international regulations.