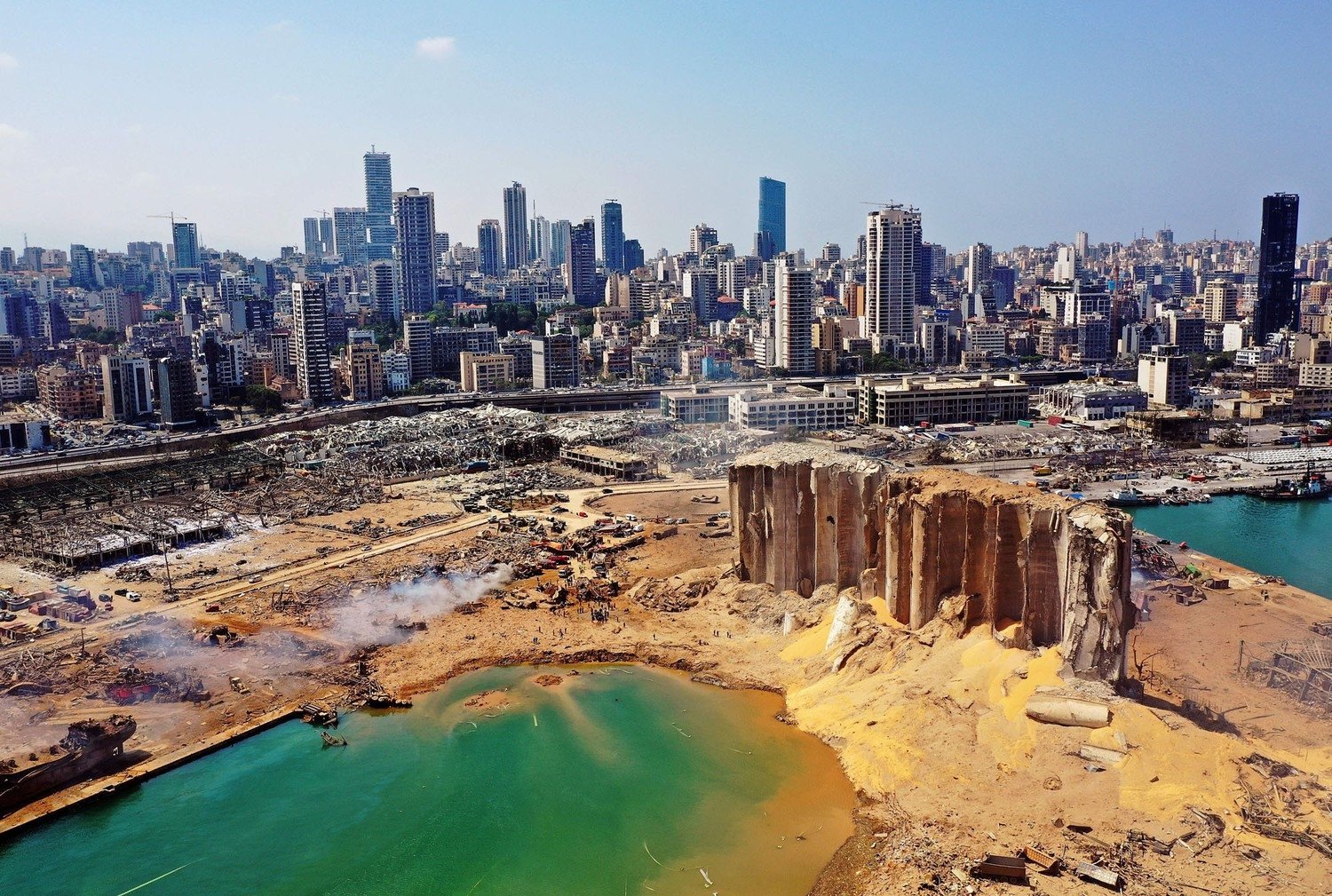 An aerial view shows the massive damage at Beirut port's grain silos (C) and the area around it on Aug. 5, 2020, one day after a massive explosion hit the harbor in the heart of the Lebanese capital. (AFP Photo)
by Anadolu Agency Nov 08, 2021 1:53 pm
RECOMMENDED

Lebanon's minister of public works hailed the efforts his country and Turkey have put forward to develop the Arab country's transport sector and infrastructure, including the renovation of Beirut port devastated by a blast last year.

Since assuming his duties on Sept. 20, Ali Hamieh has taken steps to develop the poor transport sector in Lebanon, which was worsened by last year's explosion at Beirut's port.

On Aug. 4, 2020, the ignition of 2,750 tons of ammonium nitrate at Beirut port caused an explosion that killed more than 217 people and injured more than 7,000 others, causing billions of dollars in property losses.

In an interview with Anadolu Agency (AA), Hamieh revealed that positive discussions are being had with Turkey on cooperating to improve Lebanon's transport sector, including the reconstruction of the Beirut port and the rehabilitation and operation of the country's railways.

Turkey has an advanced infrastructure and modern factories for the manufacture of passenger buses.

Lebanon's public transport is dominated by the private sector and mainly operates in major cities and residential areas while commuting in the countryside still remains a daunting endeavor for many citizens.

According to Hamieh, some state-owned passenger buses are still under the rubble since the port explosion while others need maintenance, noting that Lebanon does not have the funds to fix the problem due to the economic crisis.

Once considered the "Paris of the Middle East," Lebanon has been struggling with a devastating economic crisis for nearly three years amid protracted internal strife, regional conflicts and political instability.

Hamieh is seeking to secure funds to increase the number of passenger buses from 40 to 750.

"This plan is capable of linking the districts with the entrances to the capital all the way to the heart of the city," the minister explained.

Within a year, fuel prices in Lebanon have risen more than 12 times due to the government's plan to reduce fuel subsidies.

The disruption of railways during the Lebanese Civil War (1975-1990) led to the halting of railway transport that had been functioning since 1895.

Regarding the Beirut port, Hamieh believes its reconstruction should be accelerated as the poor Arab nation urgently needs the revenues it will generate.

Eight cranes out of 16 are currently operating at Beirut port. Hamieh said he aims to raise the number of operating cranes to 13 before the end of the year to increase the operational capacity of the port.

Last month, Hamieh held talks with the Turkish ambassador to Beirut, Ali Barış Ulusoy, on Ankara's role in the reconstruction of Beirut port, the rehabilitation of the railways and the development of the capital's airport.

"The discussions were very positive," the minister responded when asked about his meeting with Ulusoy. "There is a great response from the Turkish side regarding cooperation in these vital files and projects, especially with regard to the contribution of Turkish companies to the reconstruction and investment in the port of Beirut."

Hamieh also praised the "excellent" trade relations between the two countries, noting that Turkey does not charge transit fees for Lebanese transport trucks that cross its territory towards Europe.