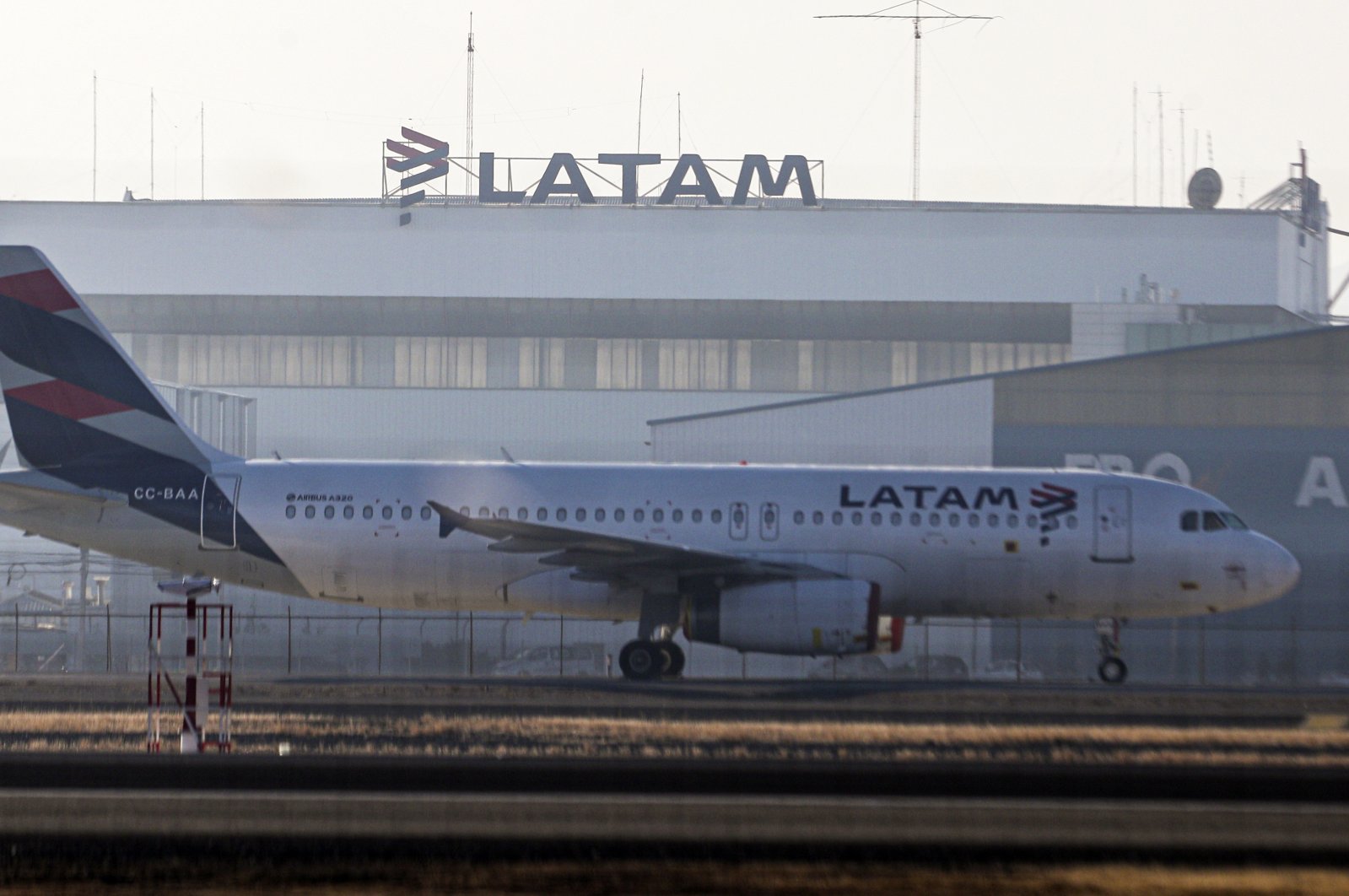 A Latam airplane sits parked at the Arturo Merino Benitez airport in Santiago, Chile, Tuesday, May 26, 2020. (AP Photo)
by Compiled from Wire Services May 26, 2020 8:23 pm
RECOMMENDED

Shares in LATAM Airlines Group SA plunged 51% on Santiago´s stock exchange after the region´s top carrier filed for U.S. bankruptcy protection on Tuesday as it grapples with a sharp downturn in air travel sparked by the coronavirus pandemic.

The exchange suspended trading in the company´s shares until mid-day to allow time for investors to assess the bankruptcy announcement.

LATAM is the world's largest airline so far to seek an emergency reorganization amid the coronavirus crisis.

The Chapter 11 bankruptcy filing underscores the severity of the financial challenges facing the travel industry as a result of the lockdowns, quarantines and other measures taken by governments the world over to stem the spread of the virus that causes COVID-19.

Passenger and cargo flights will continue to operate during the reorganization, and employees will still be paid, the Santiago, Chile-based airline said. Travelers with existing tickets and vouchers can still use them.

Chief Executive Roberto Alvo said LATAM was profitable before the pandemic brought most of the world's flights to a halt, but is now facing a “collapse in global demand.”

“We are looking ahead to a post-COVID-19 future and are focused on transforming our group to adapt to a new and evolving way of flying, with the health and safety of our passengers and employees being paramount,” he said in a statement announcing the bankruptcy filing.

LATAM Airlines said that it and several of its affiliated companies launched the Chapter 11 reorganization effort in the United States in a bid to reduce its debt and find new financing sources.

Air travel has plunged to a fraction of the levels it was just months ago as the virus spread from China to countries around the globe, prompting growing alarm in the aviation industry. The International Air Transport Association last month predicted that airlines' revenue from hauling passengers would drop $314 billion this year, meaning they could bring in less than half of what they did in 2019.

The International Air Transport Association has warned that others could fail without government support. On Tuesday, the global airline trade group said the industry’s total debt could jump to $550 billion this year, a $120 billion increase since Jan. 1.

“Government aid is helping to keep the industry afloat. The next challenge will be preventing airlines from sinking under the burden of debt that the aid is creating,” said the trade group’s CEO, Alexandre de Juniac.

Among U.S. carriers, American Airlines is widely seen as facing the greatest risk of bankruptcy, but Washington has approved up to $50 billion in grants and credit for the industry, buying it some time. On Monday, Germany agreed to provide 9 billion euros ($9.8 billion) to help Lufthansa. Air France-KLM has received billions from the French and Dutch governments.

Others are scrambling. Richard Branson is seeking help from the U.K. government and selling shares in his space company to prop up troubled Virgin Atlantic and other travel holdings. Analysts have been watching some discount airlines including Norwegian Air.

LATAM's bankruptcy filing includes parent company LATAM Airlines Group S.A. and its affiliated airlines in Colombia, Peru and Ecuador, as well as its businesses in the U.S.

The company is not including its affiliates in Argentina, Brazil and Paraguay in the turnaround effort. It says it is talking with the Brazilian government about how to proceed with its operations there.

The airline had more than 340 planes in its fleet and nearly 42,000 employees, according to its more recent annual report. It reported a profit of $190 million in 2019.

It said the reorganization effort has the support of two prominent shareholders – the Cueto family in Chile and Brazil’s Amaro family – as well as Qatar Airways, which owns 10% of the company.

Those three shareholders have agreed to provide up to $900 million in financing as LATAM makes its way through the bankruptcy process. It currently has $1.3 billion on hand, it said.

LATAM reached a deal to sell a 20% stake to Delta Air Lines for $1.9 billion last year. Its announcement Tuesday made no mention of the Atlanta-based airline.

“Airlines globally have been devastated by the COVID-19 pandemic, for which no business plan could have adequately prepared. We remain firmly committed to our partnership with LATAM and believe that it will successfully emerge a stronger airline and Delta partner for the long term," Bastian said.

He did not say whether Delta might provide further financial support, while the company declined to comment further.