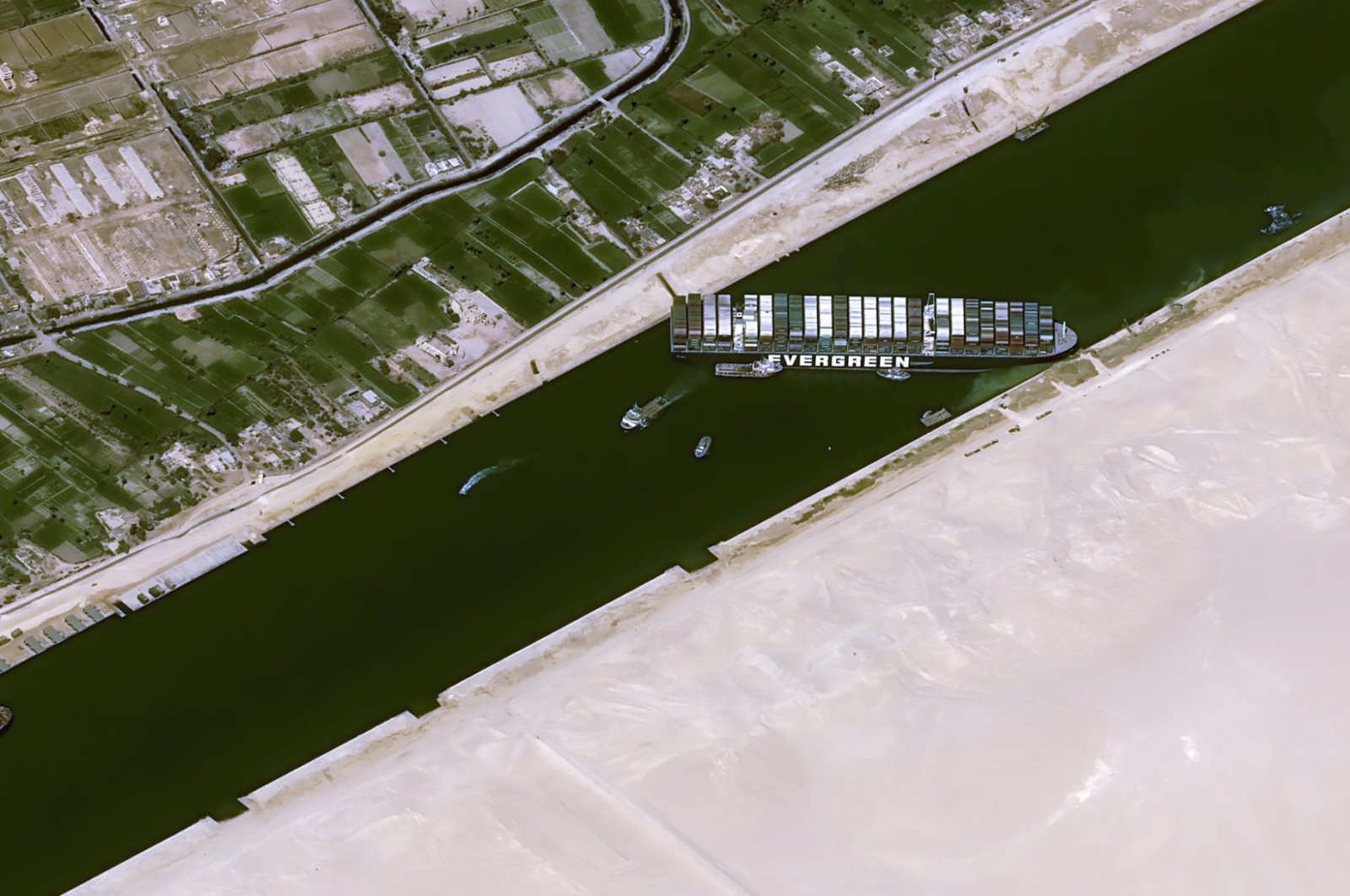 Turkey on Friday said it is ready to deploy vessels to help free the giant container ship that has been stuck sideways in Egypt’s Suez Canal since Tuesday, blocking a crucial waterway for global shipping.

Efforts have been underway, and tugboats and a specialized suction dredger continued works Friday to dislodge the Ever Given, Panama-flagged ship owned by the Japanese firm Shoei Kisen KK.

The 400-meter (1,312-foot) long vessel has suspended traffic of containers transporting goods, parts and equipment through the shortest sea link between Europe and Asia, causing headaches for global trade.

Efforts to dislodge it may take weeks amid bad weather, according to salvage experts.

“We have conveyed our offer to help to our Egyptian brothers and if a positive response comes from them, our Nene Hatun ship is among the few in the world that can carry out work of this nature,” Karaismailoğlu told broadcaster NTV, adding Ankara had not received a response yet but was ready to act.

The United States has also offered to join efforts to free the vessel. Suez Canal Authority, which operates the waterway, said it received other offers to assist in the ongoing operation. It did not specify what kind of assistance was offered.

Turkey’s offer came amid recent messages of improvement in ties with Egypt after years of animosity.

Earlier this month, President Recep Tayyip Erdoğan and Foreign Minister Mevlüt Çavuşoğlu both said Turkey had resumed diplomatic contact with Egypt. Erdoğan said the contacts were “not at the highest level, but right below the highest level. We hope that we can continue this process with Egypt much more strongly.”

Ties have been frosty since the Egyptian army toppled the country’s first democratically elected president, Mohammed Morsi, in a coup in 2013 after only a year in office.

The Ever Given ran aground in the narrow canal that runs between Africa and the Sinai Peninsula. It got stuck in a single-lane stretch of the canal, about 6 kilometers (3.7 miles) north of the southern entrance, near the city of Suez.

Around 10% of world trade flows through the canal, which is particularly crucial for the transport of oil. The closure also could affect oil and gas shipments to Europe from the Middle East.

At least 150 ships were waiting for the Ever Given to be cleared, including vessels near Port Said on the Mediterranean Sea, Port Suez on the Red Sea and those already stuck in the canal system on Egypt’s Great Bitter Lake, said Leth Agencies, which provides services for the canal.

Internationally, many are getting ready for the effect that the shipping pause will have on supply chains that rely on precise deliveries of goods.

“Should that happen, some draw down on inventories will become necessary,” he said in a Facebook post.

The backlog of vessels could stress European ports and the international supply of containers, already strained by the coronavirus pandemic, according to IHS Markit, a business research group. It said 49 container ships were scheduled to pass through the canal in the seven days following Tuesday when the Ever Given became lodged.

The delay could also result in hefty insurance claims by companies, according to Marcus Baker, global head of Marine & Cargo at the insurance broker Marsh, with a ship like the Ever Given usually covered at between $100 million and $200 million.

As of Friday morning, the vessel remained grounded, Leth Agencies added. It remains unclear when the route would reopen.

An Egyptian official at the Suez Canal Authority described the work as complex and said those trying to dislodge the vessel wanted to avoid complications that could extend the canal closure. The official spoke on condition of anonymity as he was not authorized to talk to journalists.

Kisen, the Japanese owner of the ship, said it aims to free the ship “tomorrow night Japan time,” the Nikkei reported on Friday.

A spokesperson for the owner in Japan said that the refloating work was ongoing but that the company did not yet know when the effort would succeed.

“We don’t have an estimate for when the work will succeed,” she said.

The Ever Given’s bow was touching the eastern wall, while its stern appeared lodged against the western wall.

A team from Boskalis, a Dutch firm specialized in salvaging, started working with the canal authority Thursday. The rescue efforts have focused on dredging to remove sand and mud from around the port side of the vessel’s bow.

The Suez Canal Authority deployed tugboats and a specialized suction dredger that is able to shift 2,000 cubic meters (70,629 cubic feet) of material every hour.

The authority said late Thursday that it would need to remove between 15,000 to 20,000 cubic meters of sand to reach a depth of 12 to 16 meters. That depth is likely to allow the ship to float freely again, it said.

It was not immediately clear what caused the Ever Given to become wedged on Tuesday. GAC, a global shipping and logistics company, said the ship had experienced a blackout without elaborating.

Evergreen Marine Corp., a major Taiwan-based shipping company that operates the ship, said in a statement that the Ever Given had been overcome by strong winds as it entered the canal from the Red Sea but that none of its containers had sunk.

Using data from Automatic Identification System trackers on ships at sea, data firm Refinitiv shared an analysis with The Associated Press (AP) showing that over 300 ships remained en route to the waterway over the next two weeks.

Some ships now may be changing course to avoid using the Suez Canal. The liquid natural gas carrier Pan Americas changed course in the mid-Atlantic, now aiming south to go around the southern tip of Africa, according to satellite data Friday from MarineTraffic.com.

The Ever Given was involved in an accident in northern Germany in early 2019, when the freighter ran into a small ferry that was moored on the Elbe river in the port city of Hamburg. No passengers were aboard the ferry at the time and there were no injuries, but the collision caused serious damage to the boat.

Hamburg prosecutors opened an investigation of the freighter’s captain and pilot on suspicion of endangering shipping traffic but shelved it in March 2020 for lack of evidence, spokesperson Liddy Oechtering told the AP on Friday.

Pilots from Egypt's Suez Canal Authority board transiting ships to guide them through the narrow canal, but the ship’s captain retains ultimate authority over the vessel, according to shipping experts.

Oechtering also did not say anything about the investigation's conclusion on the cause of the 2019 crash but officials at the time suggested that strong winds may have blown the slow-moving freighter into the ferry.