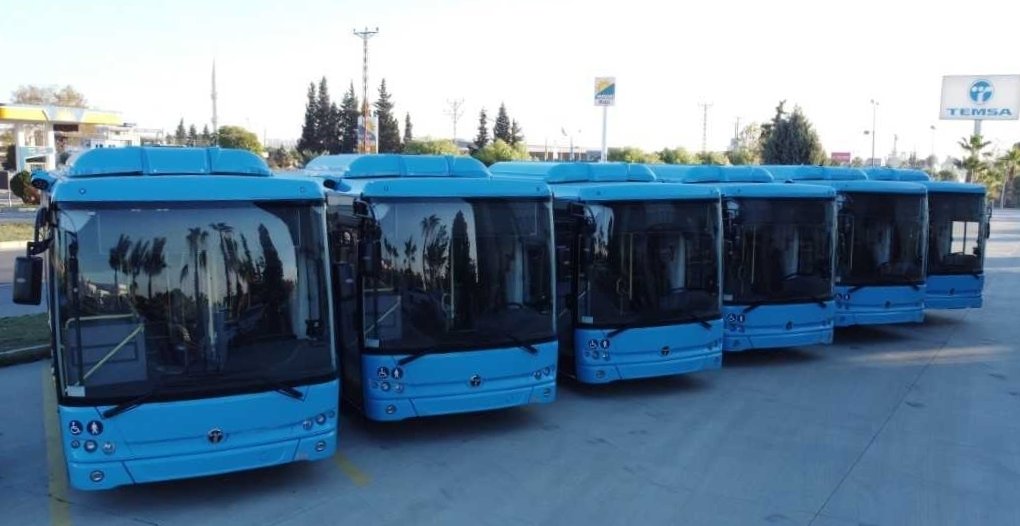 MD9 electriCITY electric vehicles manufactured by Temsa are parked at the company's facilities in Adana, southern Turkey, Nov. 27, 2020. (Photo by Temsa via AA)
by Daily Sabah with AA
Nov 27, 2020 3:31 pm

The statement noted that six buses manufactured in the Temsa facilities in the southern Turkish province of Adana are now hitting the road in Sweden. The sales of the busses were made to Connect Bus, which is among the most prominent local operators in the region with a 1,000-vehicle fleet.

The vehicles are expected to reach the island municipality of Ockero soon and join the public transportation fleet.

Cevdet Alemdar, Sabancı Holding Industry Group chairperson and Temsa board chairperson, whose views were included in the company statement, said the recent transfer of shares in particular has opened up a new period for the company.

“We are entering into a period in which Temsa will be much more powerful in the global markets with the Sabancı Holding and PPF Group partnership,” he said.

Alemdar noted that the export move represents the first step of new accomplishments that are to be achieved by Temsa, which has been serving the Turkish industry for more than 50 years.

“It will be a great source of happiness and pride for us to see Temsa electric vehicles that are a product of Turkish engineering on the roads of Sweden,” he added.

Alemdar said that Sweden is among the countries that most actively work in the field of decreasing carbon emissions and has a substantial knowledge of electric vehicles, which makes it even more significant that Temsa made its first exports to the country.

Temsa CEO Tolga Kaan Doğancıoğlu also said in the company's statement that they are among few manufacturers worldwide that can present several alternatives to customers in the field with their electric vehicles – MD9 electriCITY, Avenue Electron and Avenue EV – all of which are ready for mass production.

“The future of global public transportation is being shaped with a focus on electric vehicles,” Doğancıoğlu said. As Temsa, they continue with their efforts to become one of the game-maker companies in this future, he added.

Reflecting on Alemdar's remarks, Doğancıoğlu said that the exports to Sweden are just a starter, and they will accelerate business in the field under the new organizational structure.

The sales were made after Connect Bus board members paid a visit to the Temsa facilities in Adana where they were provided with detailed information on the company's products.

“There is more demand for our vehicles from other operators in the region,” Doğancıoğlu said, adding that the use of vehicles in urban transportation by the Swedish municipality will allow other potential customers to see the vehicles on the roads and then decide for themselves.