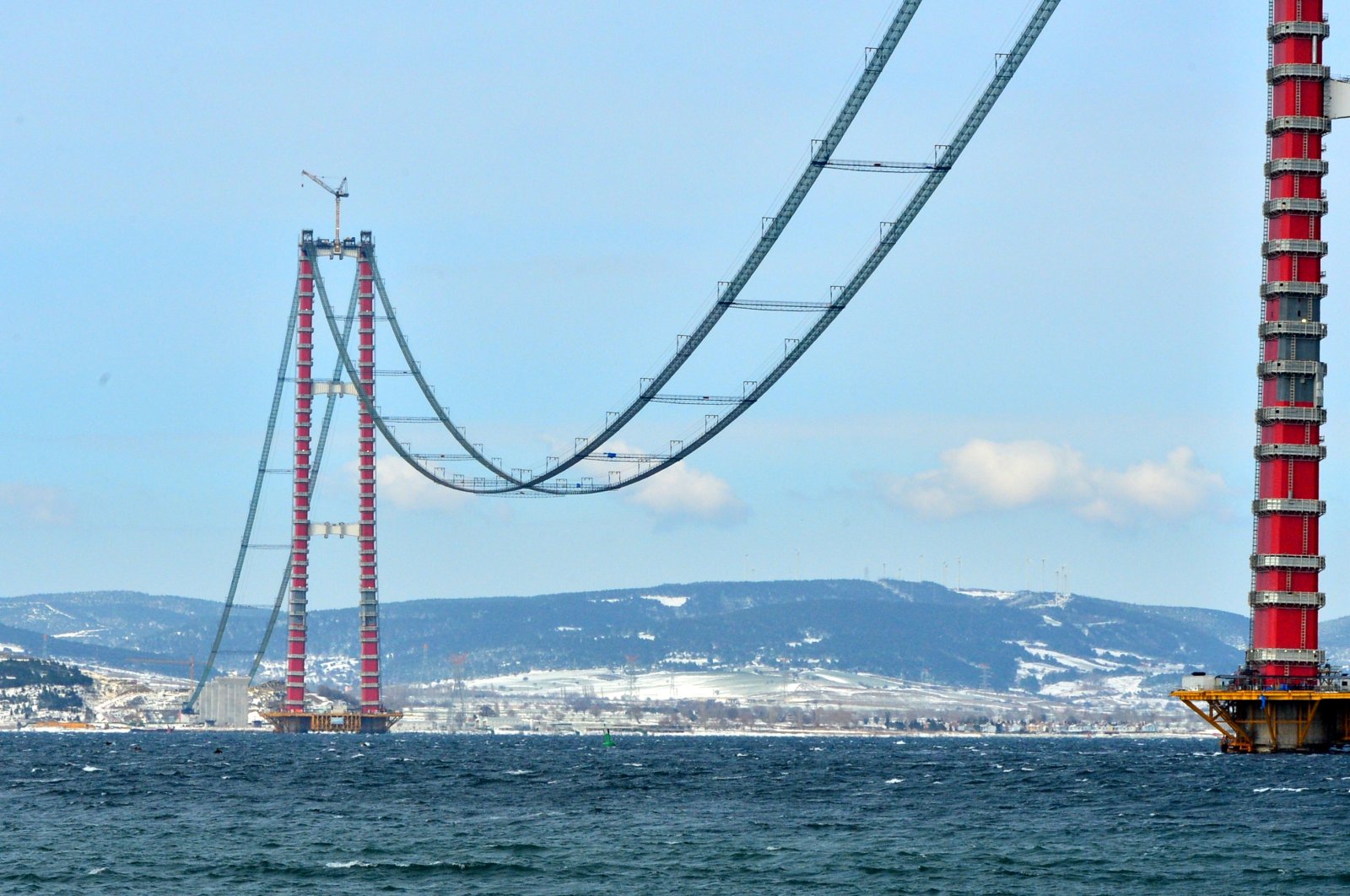 Construction of a key bridge in northwestern Turkey connecting Europe and Asia has picked up speed with the completion of a temporary road, Anadolu Agency (AA) reported Wednesday.

Upon its completion, the 1915 Çanakkale Bridge will become the world’s longest midspan suspension bridge with its unique structural characteristics, colors and other features.

Engineers, technicians and workers continue their efforts on a working platform that connects the two sides of the bridge.

The giant structure will be connected to the Malkara-Çanakkale Highway and will be the most important part of the 101-kilometer (62.75-mile) route.

When the entire Kinalı-Tekirdağ-Çanakkale-Savaştepe Highway Project is linked to the Gebze-İzmir Highway, the highway chains surrounding the Marmara Region will be united.

A bridge on the Çanakkale Strait, or the Dardanelles Strait, will be included in this network as the most important link in the chain that will connect Turkey’s Thrace, Aegean and Mediterranean regions.

With the completion of the projects, a reduction in ferry traffic is targeted, especially during the summer months and public holidays, by creating alternative routes for transportation from Istanbul and Thrace provinces to the Marmara and Aegean regions.

Normally, traveling between the European and Anatolian side of Çanakkale takes roughly 30 minutes via a ferry, and is sometimes canceled during stormy weather, aside from the long hours of waiting in the line during holiday seasons.

In addition to reducing the travel time to about only four minutes, the project will ensure the integration of the ports in the Marmara and Aegean regions into all transportation systems.

Moreover, it is envisaged to increase cultural interaction as well as commercial relations with neighboring countries by reducing vehicle operating costs and travel times as well as the time cost of goods for vehicles carrying imports and exports.

It is expected that the shortening of the distance with European countries will contribute to the development of the tourism sector.

The industry, trade and service sectors in Thrace and Western Anatolia are foreseen to gain further momentum.

Shaped to symbolize an artillery shell as a tribute to the legendary World War I Battle of Gallipoli, the spires will tower 318 meters (1,043 feet) high, with a midspan of 2,023 meters (6,637 feet), symbolizing the 100th anniversary of the Republic of Turkey’s foundation.

In homage to the Turkish flag, the towers will feature red and white, while the total length of the bridge will reach 4,608 meters (15,118 feet).

It will be one of the most important crossroads in the world when completed, with a grand opening slated for March 18, 2022.

Construction has been ongoing since the groundbreaking ceremony attended by President Recep Tayyip Erdoğan on March 18, 2017.