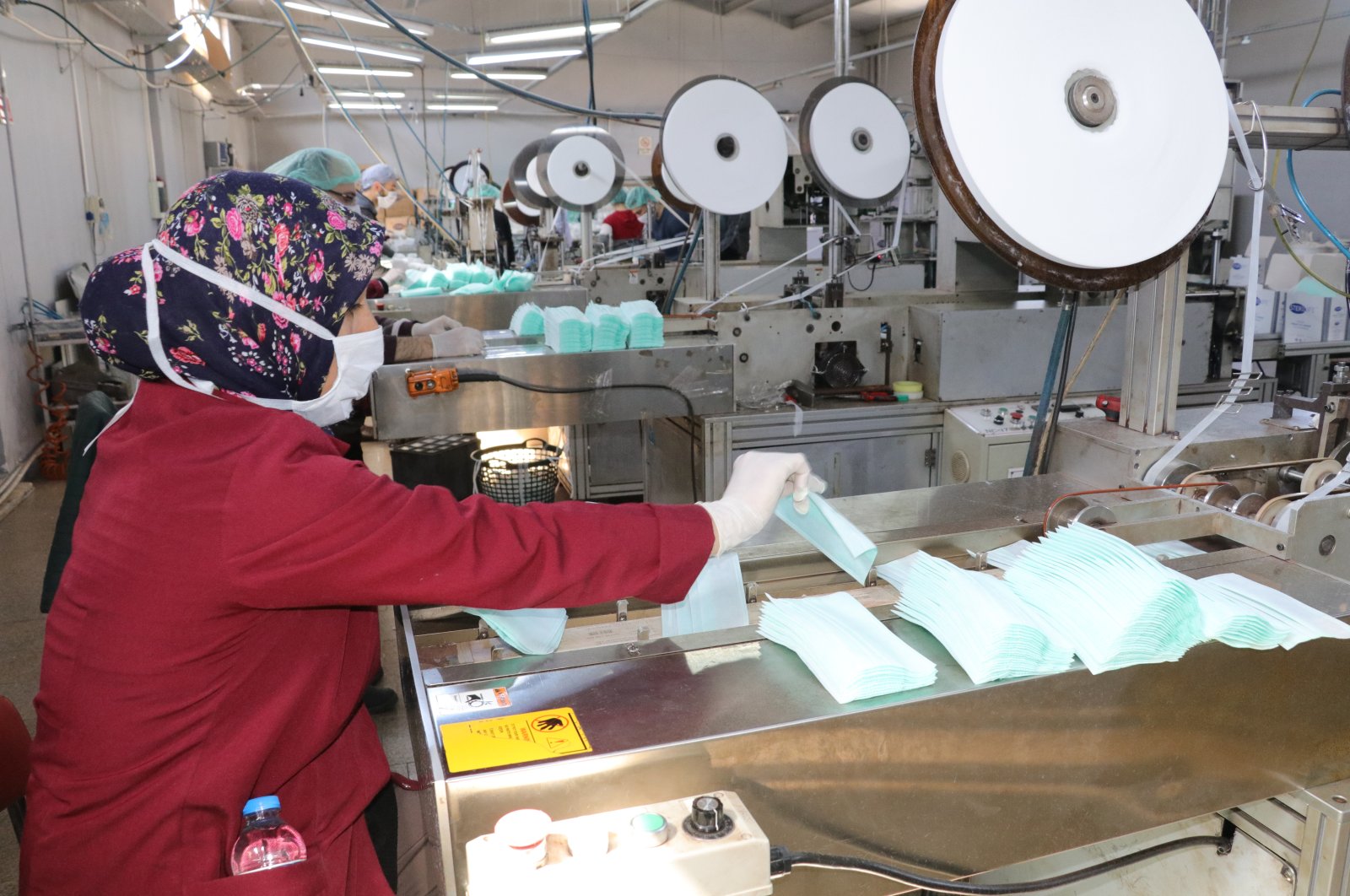 Decisions announced in the Official Gazette will meet the potential need that may arise and ensure the security of supply," Ruhsar Pekcan said on Twitter.

The tariff relief of 10% on bulk ethyl alcohol imports aims to support the production of disinfectant and cologne, the traditional ethanol-based scented disinfectant used in Turkey.

The additional customs tax of 20% on disposable medical masks and 13% on medical ventilators are lifted, Pekcan elaborated.

Suspending ethanol's use in gasoline will provide an additional 20,000 cubic meters for the production of disinfectants and colognes in the country, according to Turkey's Energy Market Regulatory Authority (EMRA).

As part of efforts to boost local production, the Industry and Technology Ministry on Wednesday announced support for the country's small and medium enterprises (SMEs) against the effects of the coronavirus pandemic.

The ministry said in a statement that the SMEs Development Organization of Turkey (KOSGEB) loans were postponed for three months, and it gave an additional four months for their projects.

The ministry also said SMEs, which produce medical protective goods, will be given additional support.

"Our enterprises which manufacture products such as disinfectants, protective clothing, glasses, masks and gloves with domestic sources, will be able to benefit from KOSGEB's TEKNOYATIRIM (technologic investment) Support Program," Mustafa Varank, the industry and technology minister, said.

KOSGEB will provide support up to TL 6 million (around $940,000) for these projects. TL 4.2 million of this amount will be a loan. Varank said that with its support, the ministry will contribute to manufacturing these products, for which demand rose after the COVID-19 outbreak.

The minister also said firms in Turkey's technoparks (technology development zones) will not pay rent for two months. Some 5,682 firms, which employ 58,241 personnel, are active in the technoparks, he noted.

Public and private firms recently voiced support for the domestic production of several types of medical equipment, including medical ventilators which are critical in treating COVID-19, the disease caused by the novel coronavirus.

With severe shortness of breath a hallmark of COVID-19, the global pandemic has increased the need for medical ventilators, resulting in fresh impetus across the globe to research and manufacture the devices.

Selçuk Bayraktar, the chief technology officer of unmanned aerial vehicle (UAV) producer Baykar, said Sunday that his company ordered 250 ventilator devices from BIOSYS to support the company. Baykar will donate these devices for the government to use in hospitals or to send to friendly nations, Bayraktar said on Twitter. Bayraktar also heads the T3 Foundation – the organizer of the country's largest aviation and technology event Teknofest.

"I invite all our Teknofest stakeholders and those who want to contribute to participate in this campaign as much as possible, during a period when the importance of developing domestic and national technologies has been revealed," he added.

Upon the invitation, Turkey's defense giants ASELSAN and Havelsan, as well as Turkish Aerospace Industries (TAI), announced that they would also support BIOSYS.

ASELSAN CEO Haluk Görgün said the defense company had also ordered 250 devices from BIOSYS. "We have decided not only to order the devices but also to provide engineering and infrastructure support to all domestic and national companies producing in this field," he noted.

Havelsan General Manager Ahmet Hamdi Atalay and the head of TAI, Temel Kotil, also said their companies would participate in the campaign to support the production of the domestically made device.

Turkey’s death toll from the coronavirus increased by seven to 44 on Tuesday as the number of confirmed cases rose by 343 to 1,872, Health Minister Fahrettin Koca said.

On Tuesday, it also imposed restrictions on grocery store operating hours and the number of customers allowed inside at a time, while restricting the number of passengers on public buses to 50% of the vehicle’s capacity.

The coronavirus first emerged in Wuhan, China last December and has since spread to at least 170 countries and regions, according to data compiled by Johns Hopkins University in the U.S.

More than 375,500 confirmed cases have been recorded worldwide as of Wednesday noon with the death toll surpassing 16,362, while over 100,000 have recovered.

Despite the rising number of cases, most people who become infected suffer only mild symptoms and recover. The World Health Organization (WHO) has declared the outbreak a pandemic.