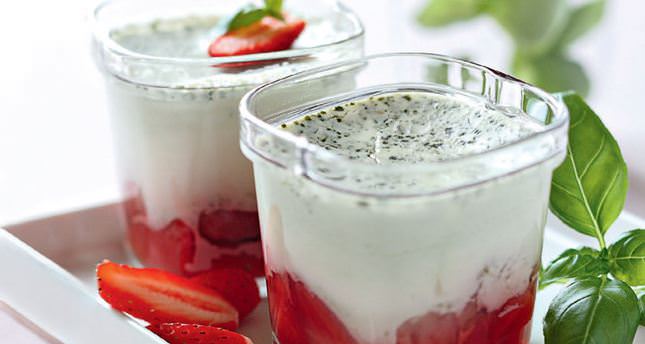 The first known usage of the word "yogurt" can be tracked back to 1625. The word yogurt is derived from its Turkish origin "yoğurt," which means to be curdled or to thicken something

Although the origins of yogurt is not clearly known, analysis of the "bulgarigus spp." genome indicates that the bacteria used to curd yogurt might have originated on the surface of a plant, according to literature. It is thought that the first contact of milk and bacteria might have been unintentional.

Basically the bacterium infects the milk and turns it into yogurt. It may seem simple in terms of producing, but believe me, the outcome is surprising.

In historical records, a mixture of yogurt and honey was referred by the Indians as the "food of the gods." For Persians, the regular consumption of yogurt is what Abraham owed his fecundity and longevity to. The benefits of yogurt have been known for centuries.

At times we even hear stories of people who try to use yogurt as a form of medication to treat unrelated disease conditions. Yogurt has been used in history primarily to treat gastrointestinal diseases. There is even a historical remark on this in French clinical history, where Francis I had a severe diarrhea that no French doctor could cure. When Süleyman the Magnificent hears about his ally Francis I having a disease treatable by none, he sends his own physician to him, who apparently cures Francis with yogurt. After this incident, due to being grateful, the French king spread the word about the food that cured him. This historical remark is accounted in the book "The World Encyclopedia of Food" written by Coyle, L. Patrick. Just because of this story we might strongly debate that yogurt is more Turkish than Greek!

Weight loss: The results of a recent study on the affects of yogurt and "Turkish/Greek yogurt" on one's diet were more than surprising. People who ate 500 grams of yogurt a day could drop a jeans size in no time.

That's not all! People who consumed the same amount not only reduced their weight, they were also able to cut down on calories for the day and lost 22 percent more body weight with 81 percent more belly fat burned! If a doctor came up to you and said that science has found a miracle to help you lose weight, shape up your body, help you eat less and make you feel full all day long, what would that miracle be? Of course, yogurt! It is an important detail that your fat cells produces cortisol - called the stress hormone - which sends signals to your body to accumulate more fat in your belly!

These signals can be broken up with a calcium rich diet, which calcium in turn sends inhibitory signals to fat cells that causes a decrease in the cortisol pumped out, making it easier for you to burn fat. Cross signaling is not the only affect of yogurt, amino acids are maybe the major actors in this process. The wide variety of amino acids found in yogurt are far greater that the ones you buy at supplement stores, and they do really help burn fat! So if you are thinking of going on a diet, your list should include 500 grams of yogurt on a daily basis!

It is just like a vitamin supplement: I don't know which one to start with! In general, one serving of yogurt is a significant source of potassium, phosphorous, riboflavin, iodine, zinc, and vitamin B5.Additionally, it also contains B12 that helps nervous system to function properly and maintains red blood cells production. I certainly didn't forget calcium! Calcium is more important and science has proven that it prevents osteoporosis. But another important factor here is that, if you want to take the greatest advantage of calcium, you should look for Vitamin D supplemented yogurt. Vitamin D helps increase calcium absorption. Yogurt originally doesn't contain Vitamin D but due to this scientific reason, nowadays diary producers are adding it to their formula. Besides vitamins, yogurt is full of different strands of protein and amino acids.

Greek/Turkish yogurt, which is strained to make it thicker, has up to 20 grams of protein per cup that is almost four times greater than the traditional yogurt. Yogurt should always be one of the pillars of a healthy diet plan or else the plan might rubble down.

Prevents hypertension: Certain proteins in dairy regulate blood pressure. Cardiovascular system and all other cells runs on an electrical potential in their membranes, regulated by exchanges of ions and minerals.

Some of the minerals such as the high levels of calcium, magnesium, and potassium contribute to the blood pressure lowering effect the of yogurt. Many of us consume more than twice the amount of salt that is permitted.

The overuse of salt causes hypertension, without a question!

The good thing is that the potassium in yogurt, which is almost 700 milligrams per 250 grams, may help wipe off some of the overload sodium out of your body. In a recent study it was shown that people who ate two or more servings of yogurt daily were 54 percent less likely to develop hypertension when compared to people who consumed none or less.

From immune defense to energy, and better smile to better skin: Yogurt makes fancy promises in science. If you would ask me whether I believe them, my answer would be, yes! A study carried out at the University of Vienna showed that women who ate one 100 grams of yogurt everyday had much stronger and more active T cells than they did before they started eating it. The T cells battle illness and infection and are the major actors of our immune system. It is believed that the affect of yogurt on T cells might also benefit people who suffer from allergies and have deficient T cells. Another study comes from Turkey's Marmara University.

The scientists at Marmara University have tested all varieties of yogurt, from low-fat to fruit falvored options, and found out that none of them eroded the tooth enamel.

They have shown that people who ate 50 grams of yogurt daily have had 60 percent lower risk of decay! There you go, yogurt helps your smile as well. Another piece of information regarding yogurt is in relation to beauty for all, including males! From time to time everyone needs to exfoliate their skin, especially their face. For this, most of you are convinced to pay great amounts of money on pricey skin treatments, although they are not needed! Yogurt, as an elementary school student would know, contains lactic acid. You may not know but some of the in-clinic chemical peels contain lactic acid to do the job! Exfoliating with a yogurt mask is promising for better skin, resolution for blemishes, correcting discolorations and reduces fine wrinkles.
RELATED TOPICS