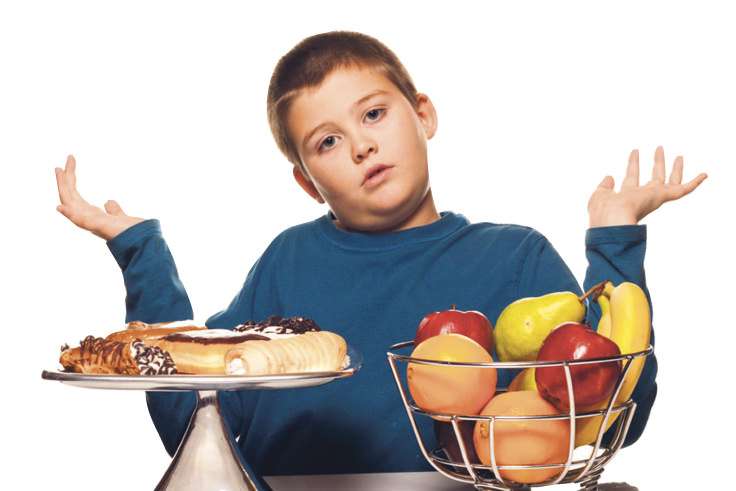 Adult obesity has been discussed at length for the past 20 years, but it is not the same for childhood obesity. The steps leading to adult obesity are taken at the beginning of our lives, so you need to take the necessary measures to protect your children, including serving vegetable-rich meals and food containing whole grains

It is often believed that obesity is only caused by daily eating habits. According to current medical knowledge, however, we know that there is much more to the complex equation than just eating poorly. It points to something more than just what we have eaten lately.Childhood obesity is a serious medical condition that affects children of all ages. As you may know, diagnosis of obesity is often based on body mass index (BMI). BMI calculation can be used after two years of age, and the normal range in children varies by sex and age rather than the strict conditions that are used for adults. Childhood obesity is defined as a child being above the 95th percentile. This means that the child is well above the normal weight and height for his or her age group. Childhood obesity draws the attention of health professionals and parents because these extra kilograms put children on a path that results in serious medical conditions when they are adults. They do not only get sick when they are adults, childhood obesity causes adult-like medical conditions even in early childhood. This is a devastating situation since if a child gets too sick at an early stage of their life, life expectancy can drop or they might have to struggle with chronic diseases when they get older. Who would want that? As an example, a child like this would have diseases such as diabetes, high blood pressure and high cholesterol at very early ages of their life. And think about the treatment and follow-up when it is so hard to take care of adults with these diseases, not surprisingly, it would be a whole lot harder to deal with children. Moreover, extra weights affect children psychiatrically, which could even lead to poor self-esteem and depression.

According to our medical practice experience and scientific knowledge, if the cause of obesity in children is not due to genetic causes, we know that this problem starts in the family itself because of their lifestyle habits. So the best strategy is to improve the lifestyle habits of the entire family.

This condition is increasing worldwide and, current statistics show that there are more than 40 million overweight children around the world, which shows that obesity is increasing. Childhood obesity has more than doubled in children and quadrupled in adolescents in the past 30 years. Although with increasing awareness the rate does not seem to be increasing recently, unfortunately it remains stable and high enough to frighten us. Can you believe that in 2010, 32.6 percent of 6- to 11-year-olds in the United States were overweight, and 18 percent of 6- to 9-year-olds were obese. One in five overweight children can translate into a one in five chance for chronic disease in adulthood, and this would mean a whole country working only for treating these people. I still believe that it is not too late to take action in treating and preventing childhood obesity for everyone and every country. This would help protect the health of our children for now and guarantee a healthier future for them.

Childhood obesity is a result of several factors from genetics to environmental conditions, singly or in combination. There is a name given to the environment of the mixture of these factors that may result to childhood obesity called obesogenic environments. Although there are a lot of defined risk factors for obesity, the greatest is believed to be both parents being obese. So it is actually a health war for parents for themselves and their children. A literature review published in 2010 showed that childhood obesity likely is also the result of today's consumerist society with easy access to energy-dense junk foods and less energy requirements in daily life. This is why maybe the best strategy to reduce childhood obesity is to improve the diet and exercise habits of the family. Not only eating habits, but also bodily movement is important. Nowadays, parents park their children in front of a television and feed them junk food. Science also shows that they eat more of this junky high calorie stuff in front of television. This is maybe a simple example that we face everyday, but if you add up all the sedentary lifestyle habits, think of the result and the devastating end value you get?

What is the solution? Well, it is simple enough to understand, but hard to take action. Bring yourself and your children to action and keep moving. Adopt strategies for being more active. Try to have a fixed meal plan, and have everyone in the family sit together as this helps children to eat healthier options rather then letting them eat alone or outside. Have rules for the dinner table such as no television, phones, texting or playing while eating. Do not speak about your child's weight or body size during meals, as this is frustrating for them. Rather than talking about their extra kilograms, mention healthy lifestyle habits for the entire family. Limit the time they spend in front of a television, gaming console, cell phone use and such, but encourage them to go out and play. Never forget that you are a parent and a role model for your children. If you choose the right thing, they would do the same as you, but if you chose poorly, so will they.

Tips to have children eat healthier options that you and everyone in the family should adopt.
- Eat vegetables and fruit with every meal
- Avoid fruit juices, sodas and sweetened drinks and replace these with part skim milk
- Try to prepare your kids favorite foods changing the recipes with healthier ingredients such as whole grains
- Replace fried food with either boiled or grilled dishes
- Replace hydrogenated oils with olive or other plant source oils
- Replace patisserie and sweets with fruit-based deserts that do not have sugar in them
- Limit the number of snacks every day
- Leave carrots and fruit on the kitchen table
- Teach them to drink water when they think that they need a snack
- Do not forget that they are small in size, so serve smaller portions to your children.
RELATED TOPICS