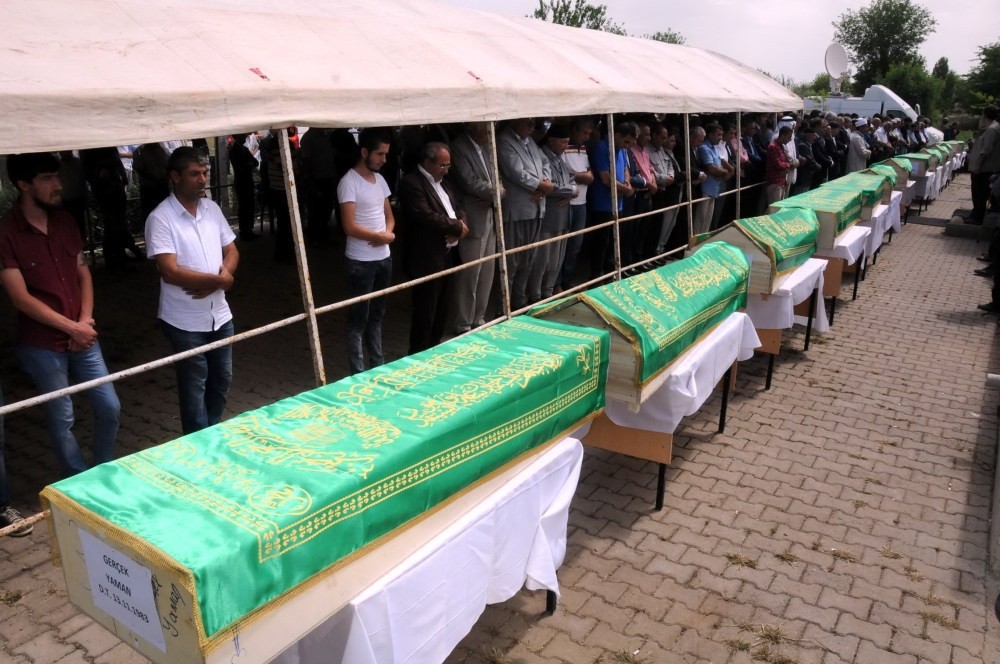 A truck carrying explosives was detonated by the PKK near the village of Tanu0131u015fu0131k, killing many civilians whose identities could only be found after detailed DNA analysis.
by Hilal Kaplan May 20, 2016 12:00 am

While the foreign media largely ignored the massacre perpetrated by the PKK terrorists, who some try to portray as photogenic freedom fighters, in the village of Tanışık in Diyarbakır, the pro-PKK HDP decided to keep silent on the tragedy

Fifteen tons of explosives, a 4-meter-deep and 20-meter-wide crater, 16 dead and 20 injured.

The residents of the village of Tanışık in Diyarbakır's Sur district stopped a suspicious truck and asked who was inside. When they learned that those in the truck were PKK militants, a quarrel broke out. The terrorists wanted to hide the bomb-laden truck in the village and pulled guns on the villagers and threatened them. After the squabble, the villagers tracked the truck, which was laden with 15 tons of explosives, and the terrorists opened fire and the truck was detonated when the villagers insisted on following it. Sixteen people who followed the truck died and 26 others were injured.

The explosion was so violent that villagers said they thought it was doomsday. Houses were also destroyed or damaged by the explosion. Security forces said the terrorists made preparations to use the bomb to attack a police station or police headquarters near the city center later at night. The residents of Tanışık are our heroes. If not for their intervention, hundreds of people might have died and thousands others might have been injured. We do not know how to thank the survivors of the explosion.

News reports are full of these details, but a picture keeps runs in my head and I cannot get it out. It is of the villagers who combed the land in an attempt to find their relatives' remains, which were spread out for hundreds of meters. It was not possible for them to mourn and soothe their family members, as they had to find the scattered organs of their fathers, bothers and uncles and put them in plastic bags. What remained following two days of collecting was 60 kilograms of body parts from 12 people. The victims, whose coffins were almost empty, were buried amid shrieks.

We have seen one of the ugliest faces of PKK terror. The Kurds suffer most and experience this pain even more deeply. However, their suffering will not find enough of a response either in reports from the Association of Human Rights and Solidarity for the Oppressed (MAZLUMDER), the Human Rights Association (İHD) or in the reports of so-called, rights-oriented institutions like Human Rights Watch.

This cruelty did not even appear as a headline in foreign media. However, the BBC, Washington Post, CBC News, Wall Street Journal, CNN, Daily Mail, Le Monde and Liberation had given wide coverage to the Uludere massacre in an accusatory way of the Turkish state. The Uludere massacre came as a result of a December 2011airstrike as Turkish warplanes thought 34 smugglers secretly passing through the Iraqi border to be terrorists in. The massacres of civilians in Turkey, particularly Kurdish civilians, by the PKK, which is considered to be a terrorist organization by both the U.S. and EU, are ignored in a way that can be considered deliberate. Meanwhile, the PKK's brutality is not limited to this massacre. On top of that, it issued a statement after the massacre, accusing the residents of Tanışık, all of whom voted for the Peoples' Democratic Party (HDP) with the exception of six in the latest elections, of being "collaborators."

The HDP's silence has revealed that it is an accomplice of the PKK. HDP Co-Chair Selahattin Demirtaş merely called on the perpetrators to claim responsibility and apologize for "such incidents." I think Demirtaş means the responsible party, the PKK, can resume massacres after apologizing for the killing of 17 people in such a horrible massacre and for "such incidents." After all, the foreign media presents the PKK as an embodiment of freedom, which includes female guerilla fighters on the front cover of Marie Claire magazine, and the HDP is its legitimate representative in the civil realm.

Hilal Kaplan is a journalist and columnist. Kaplan is also board member of TRT, the national public broadcaster of Turkey.
Last Update: May 20, 2016 1:44 am
RELATED TOPICS