Germany's role in the 1915 incidents 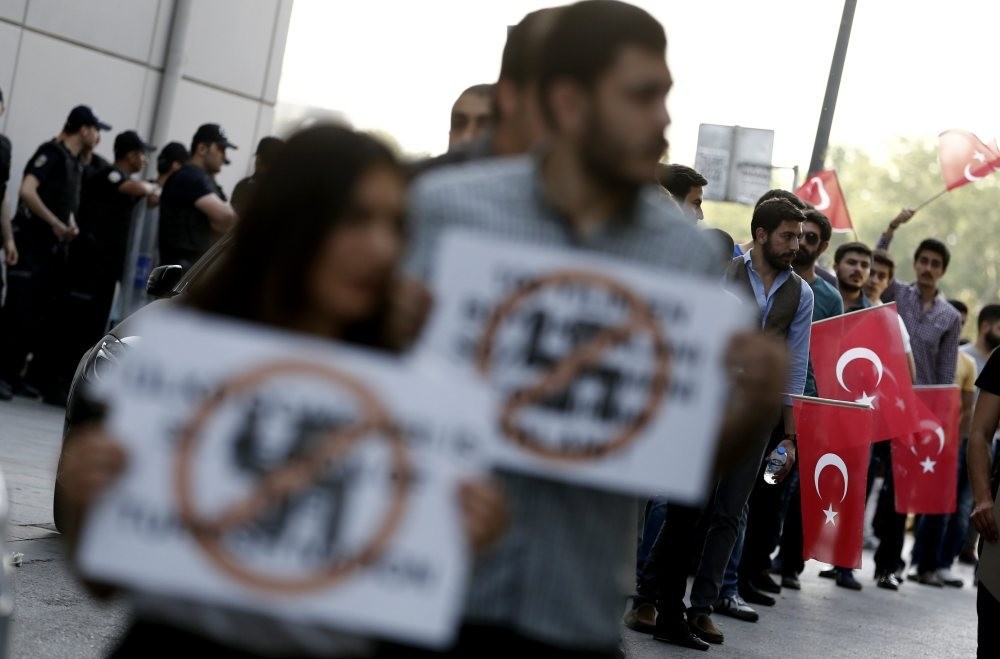 People protesting in front of the German Consulate in Istanbul, Turkey, June 2, 2016, against German parliament's decision to adopt a resolution on the 1915 Armenian incidents.
by Hilal Kaplan Jun 10, 2016 12:00 am

Historian Serdar Dinçer, who scrutinized thousands of documents in the German Foreign Ministry archives, collected his research in a book titled "Alman-Türk-Silah Arkadaşlığı ve Ermeniler" (German-Turkish Brotherhood of Arms and the Armenians). Dinçer touches on significant points in the book, which was published in Turkey in 2011.

According to Dinçer, it is a clear fact that German staff officers organized Ottoman military units in many places. He says a German military mission of 800 army officers and some 25,000 soldiers went to the Ottoman state in 1914 and lays bare the acts of these missions with documents.

One example is Lieutenant Colonel Eberhard Graf Wolfskeel von Reihenberg's attacks on Armenian gangs in the Zeytun region of Kahramanmaraş. Another one is that Karl Anton Johann Eduard Sylvester Boettrich, who was in charge of the deployment of soldiers by rail, signed the order regarding the deportation of Armenians who were forcefully employed in the construction of railways.

It is said that economic interests had a place at this point. For instance, certain companies such as Deutsche Bank, Krupp, Erhardt and Hollzman construction company, which worked on the Baghdad Railway, supported politicians and soldiers who influenced the attitude toward Armenians in the Ottoman Empire at the time. It is said Holzmann forcefully employed Armenians and Greeks.

Vahakn Dadrian agrees with historians like Tessa Hoffman and Wolfgang Gust that Germany had an impact on the execution of the 1915 incidents. He argues that a German military officer commanded the Ottoman troops who besieged Armenian gangs hiding on the Musa Dagh.

I touched on this as the Bundestag voted to recognize the 1915 incidents as genocide. The resolution presents it as if the Germans just plotted the incidents and played no other role. Furthermore, it is obvious that the draft resolution was passed by the first commission in Germany last year, but it was not brought to the floor for a subsequent vote because of the Turkey-EU Readmission Agreement about refugees. Germany passed the resolution this year in order to pressure Turkey after the Readmission Agreement collapsed. So, as an individual who regards the 1915 incidents as a painful event in the history of World War I, I must note that Germany's attitude is immoral in all respects.

Furthermore, Turkey has taken all necessary steps in this regard. It opened its archives for examination and invited Armenia and relevant parties to negotiate the 1915 incidents. In April 2014 and the following years, President Recep Tayyip Erdoğan issued a historic and official condolence to the descendants of Armenians who suffered from the 1915 incidents on behalf of the Turkish state. He said some practices were inhumane and called on Armenians to relieve their pain through dialogue with Turkey.

This chapter has been closed for Turkey. Any made in foreign parliaments will not affect this attitude. If Armenia and the Armenian diaspora respond to Turkey's olive branch, the Turkish state and public are open to writing a new chapter with Armenians.

The rest does not mean anything beyond the exploitation of a historic pain that is being used as an instrument for cheap political calculations.

Turkish-Armenian journalist Hrant Dink, who lost his life as a result of an abominable assassination, said: "The Turkish and Armenian public will treat each other through dialogue. The decisions to be made by the French Senate [and] the U.S. Senate will not help this dialogue. I said this to European Christian Democrat [German Chancellor Angela] Merkel because she wanted to pressure Muslim Turkey through a Christian perspective. I said: 'Like many Turks, we Armenians also want to enter the European Union. But we do not want this because Europe is Christian. And if you build the European Union on Christian doctrines, we do not want it.' "Turkey is not a country that can be regulated by decisions made in European parliaments. Turks are a people at least as proud as Germans. If their attitude is to pressure Turkey through such decisions, not only Erdoğan, but also a large majority of the Turkish public will tell the EU to go their own way and we will go ours. It is certain that the number of Turks who say so must have increased after Germany's recent decision.