Jeffrey: Erdoğan is not liked, as he does not 'wheedle' the West 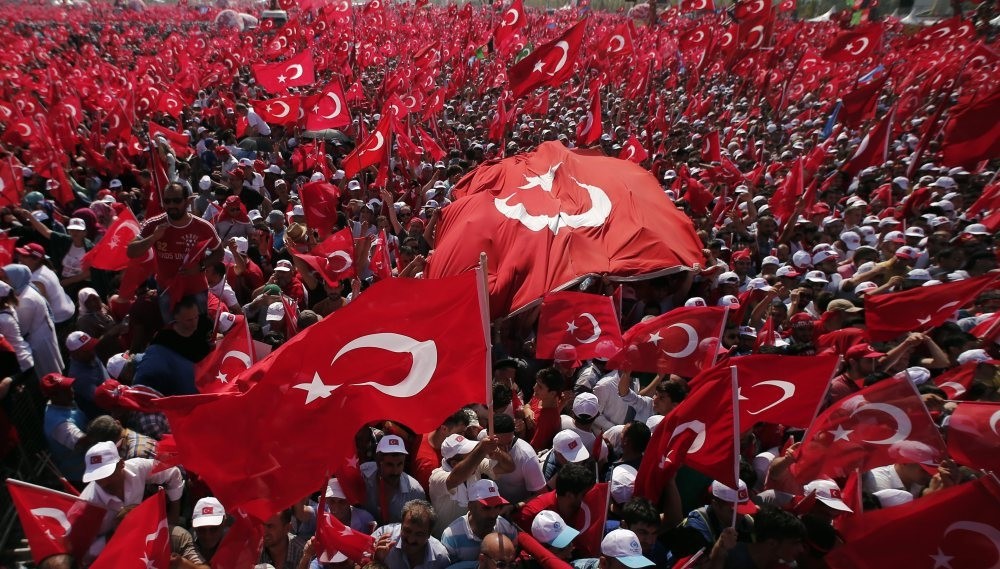 People waving flags during a democracy rally to protest the failed July 15 coup attempt that killed 240 people including civilians, police officers and soldiers, Aug. 7, Istanbul.
by Hilal Kaplan Aug 19, 2016 12:00 am

Former U.S. diplomat Jeffrey's statements about Gülen and the anti-Erdoğan sentiment in the West provides an insight in Western current views on Turkey

Analysts closely following Turkey must have realized that the former U.S. Ambassador to Ankara James Jeffrey's remarks in an interview had broad repercussions. There is no surprise that Jeffrey's honesty and clarity is reminiscent of the child in Hans Christian Andersen's tale "The Emperor's New Clothes," who shouts out that the emperor actually has no clothes on, thus spoiling the illusion.

While all American analysts try to cast doubt on the claims that Fethullah Gülen was behind the coup attempt and on the fact that Gülenists infiltrated state institutions, Jeffrey clearly expressed his observations throughout his term in office:

"The Gülen Movement has some infiltration at the least in the military that I am aware of. They of course had extreme infiltration into the police and judiciary earlier. I saw that when I was in Turkey previously, particularly in the Sledgehammer [Balyoz] case, [National Intelligence Organization head] Hakan Fidan case and the corruption cases in 2013. It is very clear that significant segments of the bureaucracy in Turkey were infiltrated and had their allegiance to a movement, not a state. That of course is absolutely unacceptable and extremely dangerous. It is highly likely that it led to the [attempted] coup."

In my article "Is the US clueless about Fetullah Gülen?" which was published last month, I wrote that Washington had intelligence about Gülenist infiltration in the state at least a decade ago. My example to support the argument was what Jeffrey had written in a telegraph that WikiLeaks published, which was wired by the U.S. Consulate General in Istanbul in August 2005:

"Deep and widespread doubts remain, however, about his [Gülen] movement's ultimate intentions. We have anecdotal evidence of the pressure that the various circles of his movement put on people they have drawn in. ... These facts, when coupled with the Gülenists' penetration of state institutions, hint that a much harder line, a sense of world-wide Islamist proselytizing mission, lies just under the surface."

Jeffrey is not only honest about Gülen, but also said the following about the real motivations of the smear campaign against President Recep Tayyip Erdoğan:

"Erdoğan is not liked in Washington. He is not liked in Europe either. He is seen as authoritarian and widely accepted as not a good player. The West dealt with more authoritarian leaders before Erdoğan, and it still does. But the difference is that the Saudis, the Egyptians - please excuse my language - wheedle us in all circumstances. They act as if they share the same values as we do considering the F-16s, the alliance relations, etc. But Erdoğan confronts us, flings our contradictions in our faces. He is not trying to become a pal, while leaders who are more authoritarian than him don't see a problem in posing as if they are good friends of ours. Even [Russian President Vladimir] Putin was acting likewise until recently. That's why Erdoğan is not liked in Washington. I know it is not fair at all."

Yes, it is not fair, but still quite ironic because despite being a former U.S. diplomat, Jeffrey could let aside all his professional baggage and admit that the problem is not Erdoğan's characterization as authoritarian, but that he does not "wheedle" the U.S. In this case, what can be said about the civil analysts who do not show a single indication of such honesty while whitewashing the U.S.?