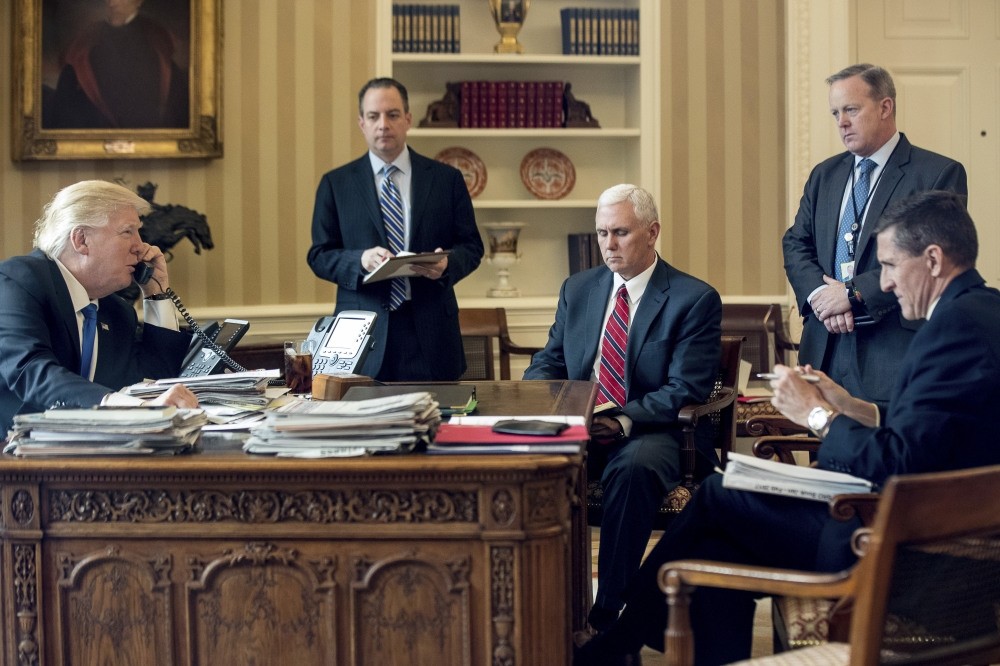 Trump (L), speaking on the phone with Putin, in Oval Office at the White House in Washington, accompanied by, from left-to-right, Chief of Staff Priebus, VP Pence, White House press secretary Spicer and then-National Security Adviser Flynn, Jan. 28.
by Hilal Kaplan Feb 17, 2017 12:00 am

Flynn's resignation goes deeper than it seems. It was the first big match in the power game between intelligence circles and the new administration in the U.S., which obviously concluded with Trump's defeat

Are the commentators, who drew parallels between Trump and the Nazis based on some of Trump's remarks, aware of the fact that Trump is the elected candidate while the U.S. deep state apparatus or establishment is trying to undermine, control and overthrow the president-elect by using their bureaucratic power? One of the most dangerous possibilities that could be encountered in a democracy is now happening in the U.S.'s democracy.

If Americans espouse the domination of these "psychological war" experts that are not part of the democratic processes over the elected ones only because of their grudge against Trump, no one can take U.S. democracy as a role model. Turkish people have won the war against the deep state under the leadership of Recep Tayyip Erdoğan. Hopefully, the U.S. can do the same."

Nothing has changed since then. On the contrary, another leak took place in David Ignatius's column and then it became a news article in the Washington Post and The New York Times after it was confirmed by nine anonymous intelligence sources. The process that forced Michael Flynn to resign, the national security adviser of Trump whose conflict with the CIA was already known by the public, was concluded.

However, it seems the tensions will not end. There are murmurs that the Logan Act, a law that was enacted in the fifth United States Congress on Jan. 30, 1799 and since then was never enforced, will be enforced for the first time and an investigation will be started against Flynn. Actually, the FBI is the one that can start the investigation but it has kept its silence. Meanwhile, some Republican senators such as Lyndsey Graham, who would do anything to get rid of Trump, has already questioned Flynn on whether he talked with a Russian envoy according to his own will or Trump's directions. Therefore, this case will forever be used as the sword of Damocles the intelligence web dangles over President Trump.

Possibly now, what Trump, who accepted Flynn's resignation, may not be aware of is the obvious fact that once the intelligence services are given an inch, they'll take a foot.

What's worse, the Democrats, who will employ any instrument available to throw off the U.S. president, are not aware that they have put democracy into the hands of intelligence circles. Yet, they will learn the hard way.