A first lady among Rohingyas 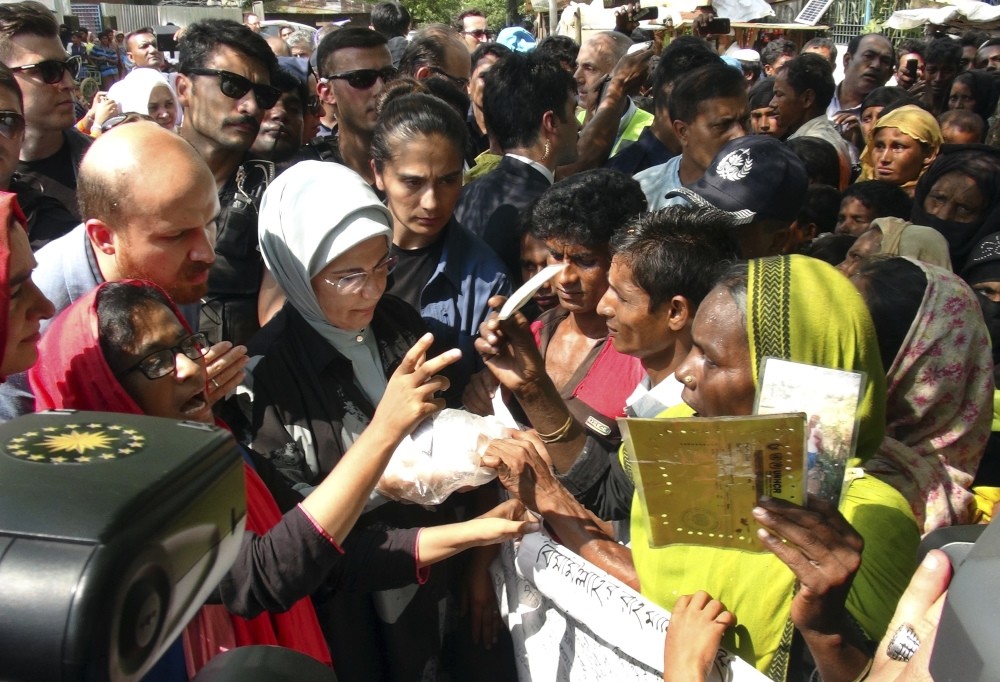 Rohingya Muslims living in Myanmar's Rakhine state have been subjected to genocide. All the stories we listened to during our visit to the refugee camp on the Bangladeshi border last week, which was paid for by First Lady Emine Erdoğan and a number of Turkish ministers, denote the unfolding genocide.

The refugees depicted what they went through in dismay, narrating the violence they were subjected to by the military or the Buddhist militia armed by the military. We bore witness to the tear-dimmed eyes of a woman telling us that her husband was burned to death, the guilty conscience of a man who fled from his village while the local women were raped before his very eyes, the mourning of a mother who held her baby more closely to her bosom while narrating how her child and husband were killed. I listened to each story and returned to my motherland in despair.

Bangladesh, which is trying its best to host the refugees, is one of the least developed countries in the world. Consequently, the refugee camp has very poor conditions. It does not have infrastructure, roads, clean water or decent food. The grounds were muddy, and there was no sewage system. The refugees are accommodated in pieces of cloth that can barely be passed off as tents; rather they are small structures resembling cages.

The refugees who fled and left behind everything they owned have neither money nor clothing. Most of the children at the camp were wandering around naked. We also heard that cholera was spreading across the camp. There was such an extremely foul smell in the air due to the lack of any kind of sterilization system that you almost even regret taking a breath. As the monsoon rains start and everywhere is covered with mud, it will become one of the most difficult places to live. Yet still, it is considered a "livable" place for those who escaped death.

But how did the region end up like this? Myanmar remained under the colonial rule of Britain for years before it officially declared independence in 1948. Today, British and Chinese influences are still felt in Myanmar. When the British included the Muslim-majority Rakhine state in Myanmar instead of Pakistan while withdrawing in 1948, the groundwork for today's tyranny was laid. Also, as East Pakistan was liberated from Pakistan by becoming the independent state of Bangladesh in 1971, the seeds of inner conflicts and hostility were sown in Asia.

Furthermore, Britain left Rohingya Muslims who resisted the Japanese invasion in 1942 to the mercy of the Japanese and General Aung San, who cooperated with the British. The general, who is the father of Myanmar's incumbent foreign minister and Nobel Peace Laureate Aung San Suu Kyi, did not grant citizenship to the Rohingya and listed them as an ethnic minority group.

The military junta, on the other hand, gave speed to the policy of deporting them to Bangladesh by depriving them even of the former recognition in 1982. The Arakan Rohingya Salvation Army (ARSA) emerged as an armed group resisting the state's tyranny. Attempting ethnic cleansing by showing ARSA's increasing attacks as a pretext in 2012, the military and the Buddhist militia, armed by the military, reduced the Rohingya population from 1.3 million to below 800,000. As the leader of the ARSA is Ataullah abu Ammar Jununi, a man who grew up in Mecca, the armed group is thought to have survived with the support of Saudi Arabia.

There is no room for confusion; the concerns are still the same: The Bay of Bengal is rich in oil and natural gas reserves. The distribution of countries and companies that signed oil contracts with Myanmar's military junta provides insight about the actors and conflicts in the region's energy market: BG Group and Ophir (Britain), Shell (Britain-the Netherlands), Chevron and Conoco Phillips (the U.S.), Statoil (Norway), Woodside (Australia), Saudi Aramco (Saudi Arabia), Eni (Italy) and Total (France).

So, the Rohingya are regarded as the "attrition" suffered as a result of the power struggle between the West and China to rule over Asia. Turkey is siding with the Rohingya by displaying a genuine anti-colonialist stance in the light of pure humanitarian diplomacy. President Recep Tayyip Erdoğan once again proved this by including the Rohingya issue among the primary topics of his agenda during the latest Organization of Islamic Cooperation (OIC) summit.

After American First Lady Melania Trump wore stilettos on her way to meet victims of the hurricane in her country, First Lady Emine Erdoğan visited a refugee camp that grapples with harsh conditions after 10 hours of travel to give voice to the Rohingya, which makes me proud of my country once again.

Hilal Kaplan is a journalist and columnist. Kaplan is also board member of TRT, the national public broadcaster of Turkey.
Last Update: Sep 15, 2017 1:34 am
RELATED TOPICS